From the Desk of Jim R, Take 2, Column 185, A Review: "Vanya and Sonia and Masha and Spike" (TheatreWorks/NewMilford) 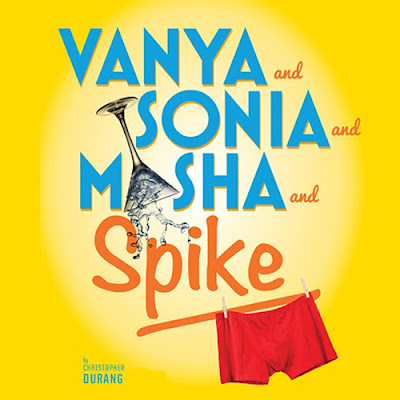 "The Actor's Nightmare."
"Beyond Therapy."
"Sex and Longing."
"Laughing Wild."
"Baby With the Bathwater."
"The Marriage of Bette and Boo."
"Sister Mary Ignatius Explains It All For You."

Few playwrights have explored the human psyche and all it repercussions as crazily,
expressively or unpretentiously as Christopher Durang. The lightning bolts of his imagination - no matter how fucked-up or off the charts they purport to be - reveal a talent like no other akin to a humorous wold of primary colors, absurdities and conversational curves that are grotesque, nail-biting, strange and pathological yet, at the same time, ironic, satiric and alarmingly true.

The core of these plays - idiosyncratic, strong-willed people struggling to make perfect sense out of their messed-up lives - are rife with foolishness, mean-spiritedness, unabashed sexuality, imagination, quirky overdrive, weirdness, pitfalls, non sequitors and telling truths that only Durang could muster.
And therein, lies their enjoyment.


"I write intuitively, and with most of my plays, I don't know what is always going to happen. This means I can sometimes go off on a wrong tangent, and with luck then rewrite it in a better direction. But it means I sometimes surprise myself as I'm going along."
(Christopher Durang, Playwright) 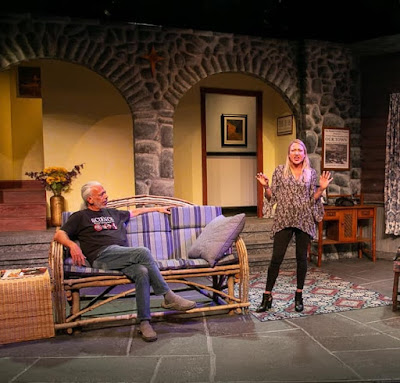 Case in point: "Vanya and Sonia and Masha and Spike."

Winner of the 2013 Tony Award for Best Play, this crazy, fun-filled comedy about life, love, loss and lunacy offers audiences a terrifically funny night of theatre guaranteed to keep them smiling and laughing for hours on end. Currently on view at Theatreworks/New Milford, Durang's voltage-charged comic portrait is staged with particular compassion and flair that complements his trademark absurdism most engagingly.

This is one of those plays that not only finds the joy in the language of Durang's writing, but has an intoxicating weirdness to it -  this is Durang; not Neil Simon - that makes it more palpable, vivid, colorful and refreshing. 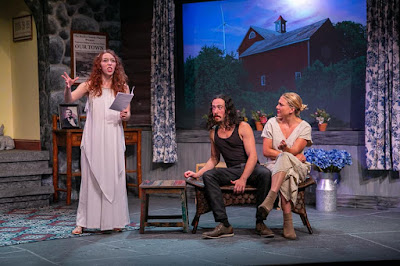 The plotline, in a nutshell, takes it cue from the plays of Anton Chekhov and finds humor with the oft-told story of three siblings at odds with one another, using dialogue, character names, references and revelations associated with the Russian playwright. The jokes about cherry orchards and what actually constitutes the makings a real cherry orchards (ie., how many trees, etc.)  are hilarious as are the play's jokey bits about Maggie Smith, Gloria Swanson, Howdy Doody, Davy Crockett, Ozzie and Harriet, Snow White, Annette Funicello and decades-old television with only four channels.

As developed by Durang, this is a play that depends heavily on the right comic timing, the right pacing, the right preening, the right posturing, the right mindset, the right line delivery and the right farcical elements to make the playwright's articulated neuroses snap, crackle and pop. The implementation of Jocelyn Beard as director is not only a coup for TheatreWorks/New Milford, but one that keeps this otherwise tricky play and its full-blown ridiculousness completely in check from scene to scene and act to act.

Beard, as director and storyteller, gets Durang wholeheartedly, which, in turn, allows her to thrust her cast through the play's unexpected comforts, insecurities, passions and frustrations in ways that are fresh, exciting and counterpoint with the main elements of his voice and artistic expression. She never once makes a false move. As the play evolves, she knows exactly how to set up a scene, how to make it play before a live audience and how to make it breathe and resonate using just the right amount of beats, rhythms, pauses and animation to shake things up both comedically and dramatically. She doesn't waste a single moment. She makes things happen intuitively and playfully using simple stage movement and blocking depending on the moment at hand. And when the script shifts gears and demands something very over-the-top or wonderfully wicked, she plunges forward most agreeably getting the point across as defined and orchestrated by Durang. It's fun, fun, fun that toys with your senses, smacks you in the face and knocks you on your ass. Beard wouldn't have it any other way. 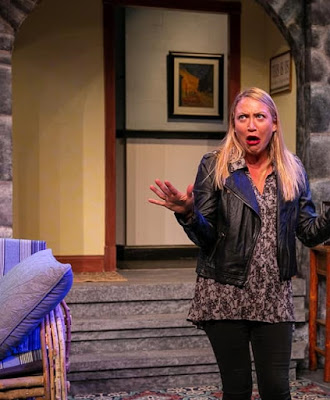 Back in 2013, Sigourney Weaver's outrageous portrayal of the showy, self-preoccupied Masha, a famous Hollywood film star with a ego the size of Beverly Hills, gave the Broadway production of "Vanya and Sonia and Masha and Spike" a high-octane energy that was chock full of splash, dash and glitter, offset by a series of rants, raves and tirades that poked fun at tinsel town, its manufactured talents, its labored success stories and its glamour-induced materialism. It's a role the actress inhabited  quite comfortably, using the right amount of lunacy and eccentricity indicated in the play script. Playing the same part, the tremendously talented Ali Berhardt ignites the part of Masha with the same fiery intensity and overblown narcissism that Weaver brought to the part. But, she's actually much funnier and crazier than her predecessor. Really? Yes, really.

Creating non-stop laughter and borderline chaos whenever she's on stage, Bernhardt gives new meaning to the the word "egotist," playing the role with such keen, ripe, comic exactness, you believe every she says and does without hesitation. It's a grand, showy role that the actress portrays with decided relish and movie diva flourish. She knows how to deliver a punchline and joke perfectly. Her moves, her expressions and her eye contact with everyone on stage is a genuine source of merriment. And in Act II, when her character comes home from a costume party (she is dressed as Disney's Snow White), she is at her comic peak crying and moaning about how pissed she is because most of the party guests assumed she was Norma Desmond from "Sunset Boulevard" on some colorful Hummel figurine. 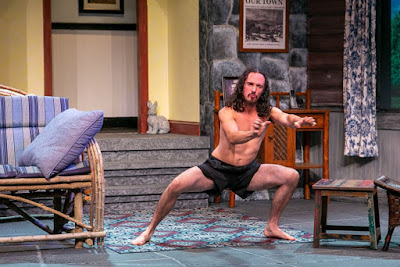 In the Broadway production of Durang's comedy, Billy Magnussen's portrayal of Masha's hunky, blonde, muscular toyboy, got laughs in all the rights places due to the actor's uninhibited portrayal of a narcissistic exhibitionist prone to peeling off his clothing and stripping down to his underwear with gleeful abandon. At Theatreworks, Nick Raines, an actor whose longish hair and hippie-like persona suggest Woodstock, 1969 in all its glory, assumes the role of Spike superbly and plays it with a refreshing dash and spirited zest that makes the character stand out whenever he's on stage. He's funny. He's charming. He's witty. He's charismatic. And he knows how to play comedy frontwards, backwards, sideways and upside down without ever missing a beat. His reenactment of Spike's HBO audition for "Entourage 2" is delivered with Actor's Studio resilience - think Elia Kazan - using the necessary beats, pauses and seriousness associated with the live audition process. It's one of the major highlights of the production.

On Broadway, David Hyde Pierce's inventive comic spin on the part of Vanya was laced with that drool, deadpan playfulness that the actor is famous for. David Fritsch who plays the same part in this production, takes the character in an entirely new direction, offering a very real, raw performance that is passionate, poetic and honest. His line delivery, comic timing and interaction with the cast is flawless. And with Durang pulling the strings, he too gets one of those big theatrical moments during the second half of Act II that allows him to rant, rave and philosophize in grand, illuminating fashion which he pulls off effortlessly. It's so off-the-wall, you want to hit "Replay" and watch it again.

"Vanya and Sonia and Masha and Spike" is a wildly clever two-act comedy that playwright Christopher Durang crafts with outrageous wit, brainy, character-driven dialogue and enough biting irony to keep you happily entertained for well over two hours. The script is bold, bitchy, saucy and lampooning. thus, eliciting loud chuckles from start to finish. With director Jocelyn Beard at the helm, Durang's outright absurdities resonate loud and clear as does the play's Chekovian-inspired characters, their triggered-up craziness, their verbal tirades and their dysfunctional angst and ennui which is the heartbeat of this marvelously engaging, thrilling comic entertainment. 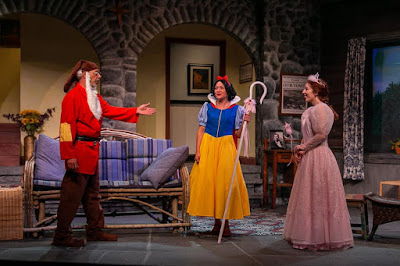 "Vanya and Sonia and Masha and Spike" is being staged at TheatreWorks/New Milford (5 Brookside Ave., New Milford), now through August 3.
For tickets or more information, call (860) 350-6863.
website: theatreworks.us
Posted by JimRuocco at 9:05 AM