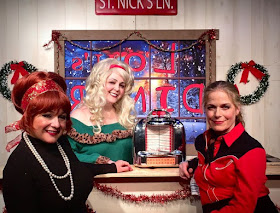 What does it mean to be a redneck?
Is is bad? Is it good? Is it somewhere in between?
Well, that depends.
In actuality, the term itself refers to southern stereotypes who like to drink and get drunk, drive fast cars, party hard, care nothing about putting food on the table, can't earn a decent living and don't give a rat's ass about their next-door-neighbor or whether or not they have a 74" HD television in their basement cellar.

That's just the way it is. Or is it?
Looked at objectively, is it so terrible to be a redneck?
Hell, no!
Not if you're looking for laughs or writing a bang-out-loud comedy for the stage.

In "A Good Old Fashioned Redneck Country Christmas," playwright Kristine Bauske pokes fun at redneck stereotypes and everything else that brands someone an actual redneck. Nothing derogatory. Nothing crass. Nothing mean-spirited. Nothing racist. Her take finds great humor in people who are hard-working, caring, rebellious, nutty and kind-hearted. All of this, of course, is laced with obvious comic zest, brazen exaggeration and road kill allegiance. And therein, lies its good ol' boys allure, pick-up truck bark and bite and down home tat and giggle.
All of it is intended as pure unadulterated fun.
Not high art.
Not Shakespeare.
Not Neil Simon.
Not Netflix or Walt Disney.

The story, in a nutshell, goes something like this.
In the small, rural American town of Christmas, a town located somewhere in the deep south, it's business as usual at Lou's Diner.
While getting ready for the Christmas Day festivities, Lou Wexler, Barbie Jo Fox and Darlene Fullman are steamed that their menfolk - Bill Wexler, Dave Fox and Jimmy Weaver - have taken the day off to go hunting in the mountains right in the middle of a huge snowstorm. They'd rather drink beer than listen to all that talk about holiday cheer, baked pies, gift-wrapped presents, in-laws or sitting down at the dinner table with people they'd pretty much like to avoid.
That all changes when a stranger named Mary Sue Archer arrives in town pregnant with nowhere to stay except Lou's Diner. Things go from bad to worse when right in the middle of a blizzard, Mary Sue ends up giving birth (nerdy Mark Riley - played with exceptionally timed comic aplomb by James J. Moran - is forced to play doctor) to a newborn baby in a nearby cow shed surrounded by pretty much everyone in the story. Time for a song. You betcha! 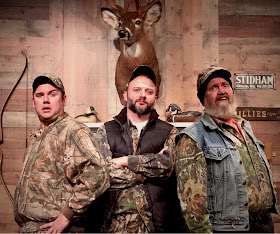 At Connecticut Cabaret Theatre, Bauske's glimpse of redneck life is given the full-tilt treatment facilitated by an awful lot of laughs, gags, double takes, spins and stretches that keep the two-act comedy afloat from start to finish.

"A Good Old Fashioned Redneck Country Christmas" plies its audience with such infinitely fluid merriment, it's impossible not to succumb to its welcoming comic flourish and accompaniment, its wild sense of communal spirit and its mad-dash unraveling chaos. If you're looking for a night out, look no further than the comfy and cozy environs of Connecticut Cabaret Theatre. This is one comedy you won't want to miss.

Staging "Redneck Country Christmas," director Kris McMurray keeps things lively, fresh and home-spun with frequent doses of wickedness, imagination, surprise and kick-ass bluster. No matter what the joke or gag is, McMurray throws one more more banana peel or empty beer can at you to knock you completely on your ass from laughing so hard. Sometimes, you can see it coming. Other times, it just hits you smack in the face and you are powerless to stop it. Then again, that's the point isn't is? 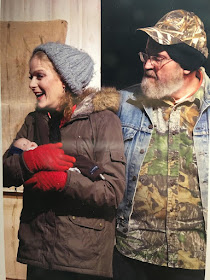 What's especially fun about this production is that McMurray never once overreaches, steps out of line or asks his cast to engage in over-the-top acting that would dampen the hilarity of the piece or its well-orchestrated southern humor. Instead, he crafts a comedy that is rich in human vitality and character that amuses and delights and never once loses sight of its origins or redneck conceit and mindset. Here, everything that happens is well rehearsed and staged with a natural fluidity and respect that brings a realness and truth to the story, the dialogue and the characters. Nothing is taken for granted. Nothing is out of sync. Nothing is dumbed down or paint-by-numbers. McMurray knows exactly what he wants and he runs with it. He also brings the right rhythm, heartbeat and soul to the proceedings which makes the production resonate, sparkle and pop. Not to mention tug at your heart strings with a very happy ending that gets you ready and excited for the upcoming Christmas holidays.

"A Good Old Fashioned Redneck Country Christmas" stars Rick Bennett as Jimmy Weaver, Chris Brooks as Dave Fox, Russell Fish as Bill Wexler, Karen Gagliardi as Lou Wexler, Tracey Brown as Darlene Fullman, Jennifer Nadeau as Barbie Jo Fox, James J. Moran as Mark Riley, Dave Wall as Bob/Narrator and Maria Pompile as Mary Sue Archer.  All nine are especially gifted performers whose charm, warmth, personality and passion give the production its unifying lift, pulse, drive and free-flowing adrenaline. Under McMurray's steadfast, astute direction, each actor inhabits the role he or she is given with the right comic dash and verve that serves the material well. Everyone understands their role within the play inside out and all around. They are quick on their feet. They know how to play comedy and they play it well. They have great onstage interaction with one another. They know how to get a laugh and deliver a punchline without any form of calculation. And individually, every single one of them stands out in scenes or special moments that trust them center stage in the quirky, contained environment of a small southern town where laughter is the bill of fare along with a homemade pie right out of the oven and a cooler overflowing with ice-cold cans of beer. 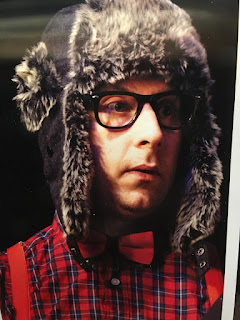 In conclusion, "A Good Old Fashioned Redneck Country Christmas" is a zany, fast-paced comedy laced with spirited dashes of redneck humor, holiday cheer and festive merriment. It is good, old-fashioned fun played for laughs that keep coming at you in rapid succession. The ensemble cast, under Kris McMurray's playful direction, have great fun bringing Kristine Bauske's relatable, silly story to life. C.J. Janis delivers the sound and light cues with expert timing and precision. The atmospheric set, designed by James J. Moran, is absolutely perfect. And so are the costumes.
As holiday entertainment, the show itself has plenty of charm and giddy yap. And get this, there's a sequel waiting in the wings this spring offering more of the same charm, punch, big laughs and redneck irrelevance. 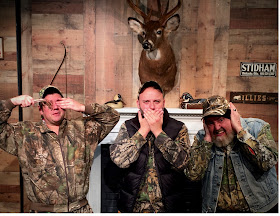