From the Desk of Jim R, Take 2, Column 3: A Review: Stephen Sondheim's "Assassins," presented by The Warner Stage Company 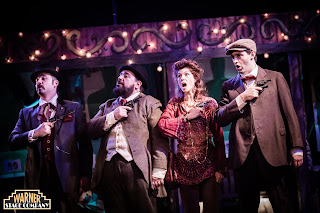 Every squeeze of the trigger, every bullet fired, every alarming effect emitted by the sound of a gunshot or multiple gunshots is deployed with such brilliant, side-show effect by director  Katherine Ray in the Warner Stage Company's dazzling, potent revival of Stephen Sondheim's "Assassins," the show's imposing, bizarre concept lingers long after the stage lights fade to black and the house lights come up, quickly transporting you back to the 21st century.
"Did I just spend two hours in the murky world of  political assassination and love every minute of it?" you ask yourself over and over again.
The answer is "YES."
Haunting.
Mesmerizing.
Twisted.
Quirky.
Murky.
All that, and more. 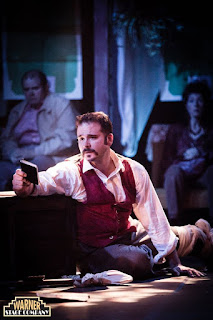 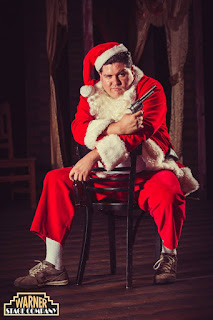 Welcome to "Assassins."
Mind you, this is not the world of "A Little Night Music," "Company," "Sunday in the Park with George" or "Follies." Instead, this dark and gloomy tale of assassins.....men and women, who have killed to tried to kill American presidents... unravels with such theatrical aplomb, you're not likely to take your eyes off the stage or the actors for any single moment, for dreaded fear of missing something important.
If "Assassins" comes up trumps, an ovation of sorts, is a must, for the visionary Ms. Ray. As director, she completely loses herself in the material; she completely understands the theatrical evolution of "Assassins" from script to stage; and revels in its marvelous, in-your-face oddities and perversity.
But she doesn't stop there.
As the assassins assemble, one by one, in pairs, or in groups, she brings disturbing and disquieting shading and nuance to the proceedings, which, by no means, is an easy task to master, considering the show's twisty concept. An added bonus comes from her choice of playing ground: an imposing carnival setting, reminiscent of Broadway's "Side Show" and Ryan Murphy's "American Horror Story: Freak Show." 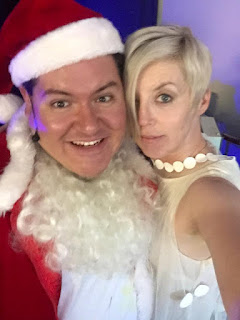 It not only works to full advantage, but allows Ray to successfully juggle the show's intermingling flights of  slapstick, vaudeville, documentary, tabloid sensationalism, confessions, and oh yes, the gunshots (some aimed at the Presidents; others, aimed directly at the audience) without ever missing a beat.
She even treats the script's candid and amusing banter about bullshit, fucking and blow jobs with the right amount of cleverly-orchestrated brashness. You can't help but laugh. Is it shocking? Hardly. Is it funny? Hell, yes.
Finally, there is the casting.
An actress herself, Ray thrusts her audience into the hallucinatory world of "Assassins" using an exciting ensemble cast completely attuned to the freakish carnival world that surrounds them. As they seek to change history, make themselves front-page villains or simply cry out for help, she always knows what buttons to push or have her actors push (script wise, musically or improvisational), whether they appear in group scenes or others that find them dead alone...center stage...wondering whether or not they will be swallowed up whole right before our very eyes.
Aided by the Warner Stage Company's intimate theater space (a small-scale version of Broadway's Studio 54), Ray is able to communicate that one-on-one intimacy between actor and audience that is both aggressive, unsettling, taunting and commanding.  Jameson H. Willey's atmospheric Broadway-like set design only furthers that notion.


(The Actors, Front, Center, Sideways and Upside Down) 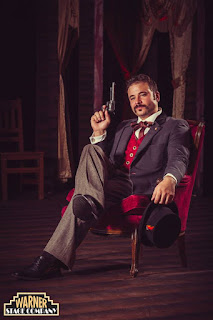 Ian Diedrich, as John Wilkes Booth, creates a polished, superbly etched portrait of an unhinged assassin and lost soul torn between an obsession to become front-page news or run blindly into the night from the pandemonium he created after shooting President Abraham Lincoln in the presidential box at Ford's Theater. This is not an easy role to pull off, but Diedrich grabs hold of it, pulls it apart from limb to limb, making us completely believe and understand the why's and why not's of his character's rage, both musically and dramatically. Bravo! 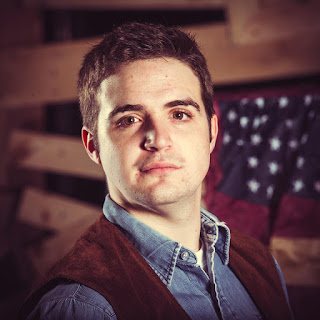 Noel Roberge, doubling as both Balladeer and Lee Harvey Oswald, is a magnetic young performer who easily communicates the narrator's unbridled optimism, soulful musicality and mockery of certain cold-blooded killers. Vocally, he is in such fine voice, if anyone is doing "Into the Woods" or "Sweeney Todd" (yes, more Sondheim musicals, folks!), Roberge would be perfect for both Jack and Tobias.
As Oswald, the now-famous assassin, who, in "Assassins" seems deeply troubled and tormented by his plan to shoot and kill JFK from the Dallas Book Depository window, the actor completely loses himself in the part and the material, a compliment of the highest order. 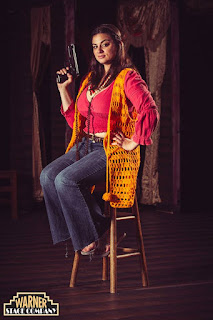 Lynette "Squeaky" Fromme, played with ripe, inviting gusto, by Michelle Funaro, deftly communicates her character's giddy, over-the-moon love for Charles Manson like a late 1960's flower-child happily hooked on acid. She is so believable, dramatically, comically and musically, one wonders if she actually was yanked from that time period and plunked dead center into Ray's mesmerizing production
. 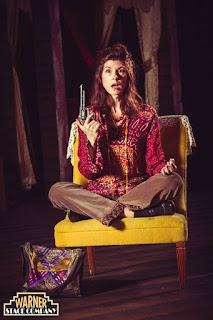 The casting of Suzanne Powers as the dithery, confused and manic Sara Jane Moore, a woman who realizes she once knew Manson in high school, is an absolute joy in itself to watch. The actress is wonderfully charismatic, off-balance, moody, edgy and bonkers (she reminds one of a young Lily Tomlin) and so much more. She never misses a beat. She is complete control and has great fun bringing her respective character to life. I can't wait to see what play or musical she does next. 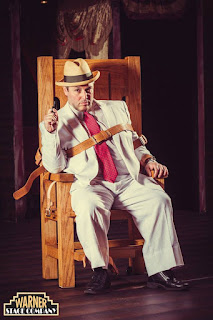 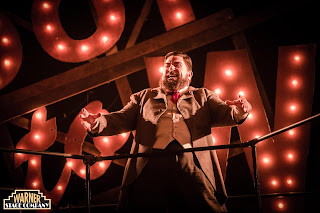 There is a sheer brilliance to the commanding, crafty, freakish and disturbing performances of John Farias (Giuseppe Zangara),  Matt Cornish (Samuel Byck), Joe Harding (Charles Guiteau) and John Newey (John Hinckley) that completely gets under your skin, which, when you think about it, is exactly, what the material calls for. Watching each of them completely unravel and disconnect to the point where they completely lose their grip on reality (Ray's direction of each actor in these very frenzied on-stage moments is amazing) is worthy of a standing ovation. 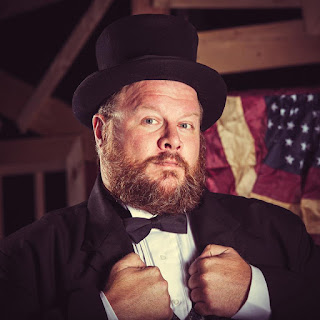 The always-wonderful Keith Paul (President James Garfield/Ensemble) offers yet another dramatic and comedic turn, rich in the high energy and high spirit he is famous for. He plays a variety of roles, each to perfection. And yes, his take on every one of them is decidedly different, a sign of yet another dedicated and nuanced actor who connects with everything that's put before him.


(The Music, The Lyrics, the Musical Director)

Stephen Sondheim's score, a quirky mix of parodies, individual numbers, anthems, melodies and tattered confessions, springs vividly to life in the more-than-capable hands of music director Dan Koch. It should be noted that "Assassins" is not your typical Sondheim score. Here, the music is undeniably different....carefully chosen...to reflect the era and the characters who populate it. It is not something you'd hum in the shower, sing madly behind the wheel of your car or study madly for your next musical theater audition. Nonetheless, the songs...."Everybody's Got the Right," "The Ballad of Booth," "Gun Song," "Another National Anthem," to name a few....fascinate and compliment the progression of the carnival-themed proceedings. 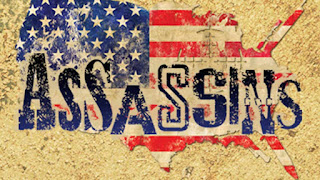 The finale, titled "November, 22, 1963," finds the assassins singly wildly about the power and control that comes from taking a president's life. Here, they urge Oswald to act quickly, kill JFK and then, join their ranks. It's a justified conclusion to "Assassins" (boldly stated by both Ray and Koch) and one that lingers long after the musical ends. That, coupled with the fact that there is absolutely no curtain call (a wise decision dictated by the cast), heightens the final momentum of this dramatically different, cruelly funny Sondheim musical about reckless individuals, condemned forever in our minds and the freakish playground they once populated.


The Warner Stage Company of "Assassins" is being staged at the Nancy Marine Studio Theater ( 82 Main Street, Torrington, Ct.) The production runs through Oct. 4.
Performances are 8 p.m. Friday and Saturday and 2 p.m. Sunday. Tickets are $29. For reservations, call (860) 489-7180.