From the Desk of Jim R, Take 2, Column 25, A Review: "Peter and the Starcatcher" (Warner Stage Company) 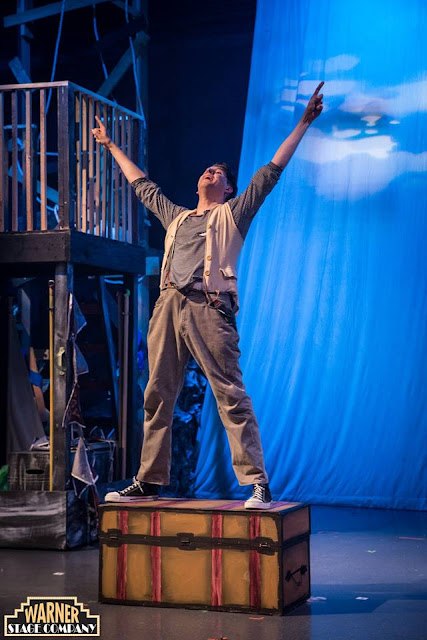 It's been well over a century since J.M. Barrie's proud, young boy who would not grow up delighted and cajoled Edwardian England, from the royals themselves to just about anyone who fancied the lost childhood of yesterdays.
Let's for a moment, backtrack.
London.
Pirates.
Shipwrecks.
Crocodiles.
Orphaned boys.
Never, Never Land.
Flying.
Wendy.
Pan.
Tinkerbell.
I, mean, what's not to like. 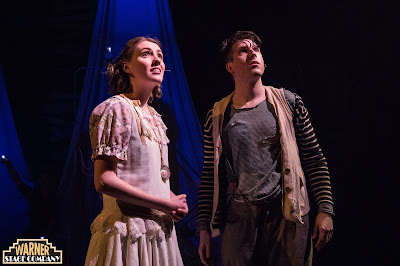 In "Peter and the Starcatcher," director Katherine Ray uses stardust, fairy dust and probably just about every conceivable ounce of blood, sweat, tears to transport her audience back in time to the world of Rick Elice's dizzying, exciting, reimagined glimpse of how it all began. Though her eyes, this beautifully-staged revision of the "Peter Pan" story is stirring, wondrous, magical, slaphappy, crazy, surprising and joyful. It soars and soars and soars. It entices and excites. It makes you smile. It makes you cry. It also makes you want to give every theater award imaginable to Ms. Ray, whose talent and insight for theatre is akin to that of the super beings of London's West End stage and  Broadway who brought you "The Curious Incident of the Dog in the Night-Time," "Harry Potter and the Cursed Child," "Spring Awakening" and "Dear Evan Hansen," among others.
If  Barrie were alive today, he, no doubt, would applaud Ray's creativity and insight and probably overnight her two dozen, white roses from Covent Garden with a note saying, "Bloody brilliant, Miss Ray." 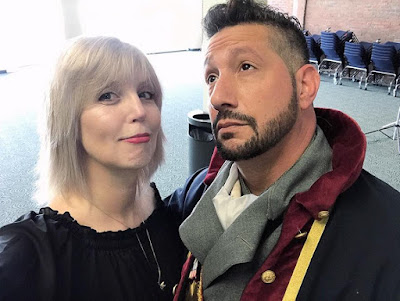 Trust me, when I say this.
In all of my years of acting in plays, reviewing plays, directing plays and seeing plays all over the world.....London, New York, and oh, yes, downtown Torrington....I've never seen a community-based, directorial effort or achievement quite like this one. 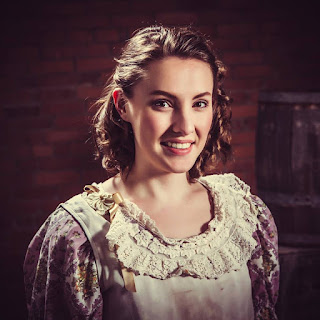 So what exactly is "Peter and the Starcatcher?" you ask.
Taking its cue from Dave Berry and Ridley Pearson's novel, it tells theatregoers how Peter became "Pan," how he acquired his eternal youth, how a dastardly and dark "Stache" lost his hand and became Captain Hook, how a swirling yellowish glove became a twinkling greenish night named Tinkerbell and how a mysterious, magical island got its name....Never, Never Land. There's also lots, lots more, including some surprising info on that very special young girl whose last name in Darling.
But, I've already said too much.
At the risk of having my press tickets to "Finding Neverland" shredded or being asked to walk the gang plank by the entire "Starcatcher" cast, I can't reveal the play's ending. 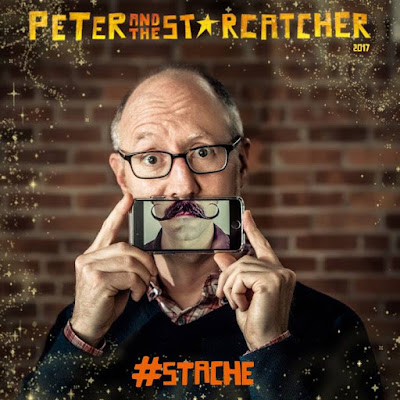 Musically, "Peter and the Starcatcher" is a play with music. There are a few, scattered songs here and there, but this is not a traditional musical like "Finding Neverland" or "Mary Poppins." Regardless, music director Dan Ringuette has his hands full playing the show's evocative mood music, making and synchronizing expertly timed sound effects and giving the production its sense of magic and whimsy. He makes it look effortless.

As the show begins, the stage itself is purposely cluttered with ropes, riggings, sails, ladders, boxes, a lookout point, a staircase, costumes, props and a tiny boat. The cast, doubling as storytellers, invite us to use our imagination as the Warner Theatre stage morphs into cabins, mysterious islands, the desk and bowels of a ship, a beach, a cage, a jungle, a mountain top and so much more. Steve Houk and Katherine Ray's brilliantly designed, atmospheric, Broadway-like set, heightens the production's mystery, bounce and aura. 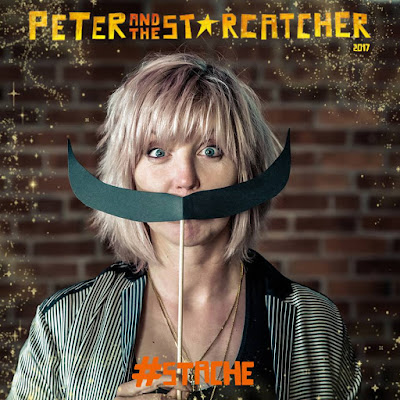 As directed by Ray, a young boy's adventure materializes right before our eyes in pretty much every color of the British rainbow. Those lights, those sounds, those waves, those beats, those words, those discoveries, those wispy lights that twinkle, those unexpected twists and turns...simply ignite into being or materialize out of nowhere like magic.
And they keep coming at you in such intriguing, imaginative and wacky and wild ways, you not only marvel at Ray's intuitive, never-ending genius, but wonder how she kept her cool with so much sensory overload to remember, to paint, to evolve, to block, to set, to position. And when, did she sleep? Probably, never.

In the hands of less experienced directors (no names, please), this "Peter and the Starcatcher" could have been ridiculously all over the place. But, it's not. Not once. Never. Ray keeps things coming and coming at you at breakneck speed for nearly 160 minutes. And her cast willingly laps it up so engagingly, you sit there saying "Wow!" over and over and over. Your laughs. Your cheers. Your giddiness keeps them merrily alive. 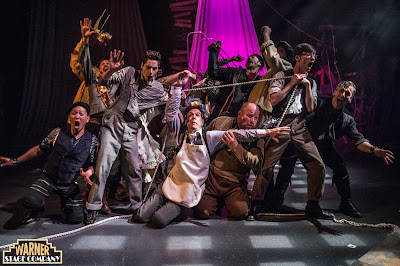 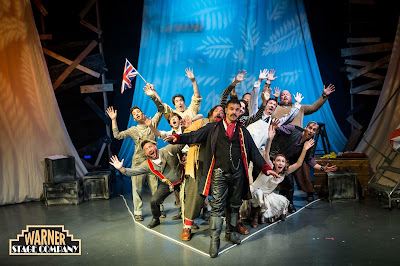 The gusto, the rawness, the giddiness, the drama, the schtick, the enveloping energy of this group is amazing, at every, twist, turn, wink, posture, grimace, costume change and tossed animal. To pull this feat off is one thing. But to remember all of the stage blocking, movement, pantomime, expressions, body language, line delivery and conceits Ray gives to each and every one of them boggles the mind. The fact that it all comes together so seamlessly is just remarkable. Their intuitive level of trust, dedication, talent and synchronicity amazes. 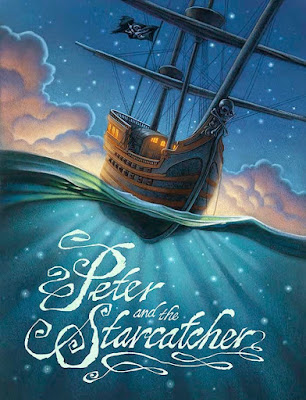 Then again, so does this entire production. A dazzling entertainment, "Peter and the Starcatcher" is a fanciful, uplifting backstory to J.M. Barrie's "Peter Pan." Its use of British musical hall schtick, story theater staging, 19th century theatrics and a fair amounf fairy dust is guaranteed to please, excite and entertain. It's an adventure, you won't want to miss. 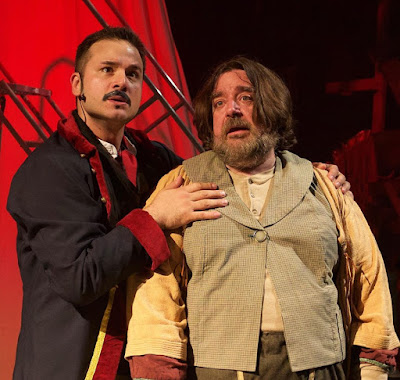 "Peter and the Starcatcher," presented by the Warner Stage Company, is being staged through June 25 at the Nancy Marine Studio Theatre (68 Main St., Torrington, CT)
Performances are 8 p.m. Fruday and Saturday and 2 p.m. Sunday.
For more information, call (860) 489-7180.

Posted by JimRuocco at 9:45 AM