From the Desk of Jim R, Take 2, Column 64, A Review: "Murder on the Orient Express" (Hartford Stage) 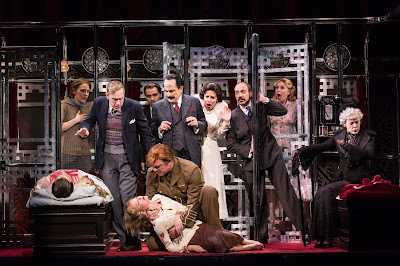 In the stage version of "Murder on the Orient Express," legendary detective Hercule Poirot must find a killer on the loose in a carriage of first-class passengers and train personnel, each, of course, having a possible motive or two, a cleverly constructed back story, a suitcase chock full of lies, deceit and false alibis and a passport that may or may not contain the traveler's real name. In short, no one can be trusted.

Anyone familiar with the whodunit genre knows that Poirot, genius that he is, will solve the crime and bring the murderer to justice. That said, the story, nonetheless, carries the intensity and scope the original Agatha Christie conceit allows, offset by enough campiness, drama and schematics to make you want to grab yourself a ticket at the OE station and join Poirot for the ride. 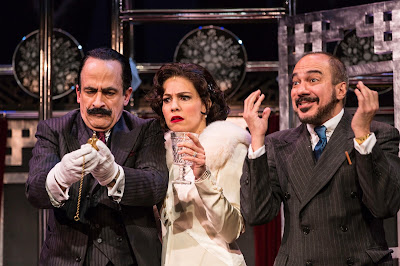 At Hartford Stage, the train ride itself, i.e., the actual stage production, is a joy to behold much like the Orient Express itself. It's opulent. It's grand. It's showy. It's fun. It's flavorful. It's exotic. It's also a decidedly perfect throwback to yesteryear, bathed in warm, tantalizing nostalgia that's impossible to resist.  I, for one, can't wait to see it again. 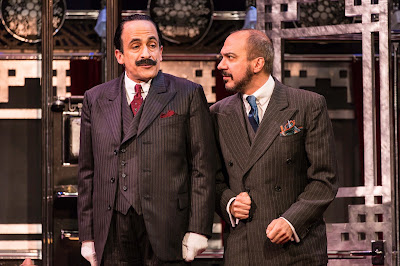 Yes, this is a whodunit. And yes, the list of suspects are rife with clues, deceits, motives, rituals, explanations, pretenses, lies and surprise twists. Still, you are asked to play detective along with Poirot. And you and you alone are forced to play the game, solve the crime and  decide who's the murderer and decide whether or not he or she is guilty. And whether or not he or she was acting alone.

If you've seen the 1974 film with Albert Finny, Lauren Bacall, Jacqueline Bisset and Ingrid Berman or the sumptuous 2017 remake starring Kenneth Branagh, Michelle Pfeiffer, Penelope Cruz and Johnny Depp, then, you already know the answers. Regardless, this "Murder on the Orient Express" is such exhilarating fun, you eagerly forget the actual whodunit ending, settle back in your seat and act as if you're seeing this Agatha Christie thriller for the very first time.

Working from Ludwig's cheeky script, Mann delivers a production that is fast, fluid and cinematic in its approach to theatrical storytelling. She handles the material with the care and calculation of a  bonified  murder mystery buff. But she doesn't go overboard or misstep the whodunit genre just for the sake of laughter, drama or characterization. From start to finish, this is a very focused, cleverly orchestrated production. 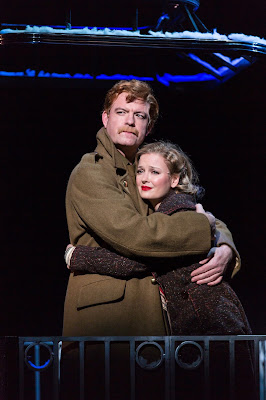 The genius of this "Murder on the Orient Express" comes from the fact that Mann's production is gift wrapped in charm, razzle-dazzle, sparkle, whimsy, pathos, virtuoso and wonderful splashes of color including a gleaming, shiny silver and very rich, seductive crimson. Everything falls into place nicely from the strategically placed black curtains that open, close and frame the impending action of the actual train that moves, stops, or shifts back and forth to reveal the next scene backed by some smart lighting, sound and music cues. And let's not forget the splendid period costumes which reflect a bygone era of lushness, glamour and sophistication. 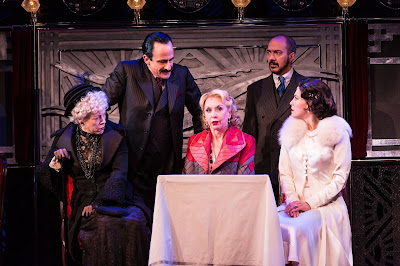 In a play such as this one, casting is everything. And Mann has assembled an impressive, dynamic line up of actors and actresses who have as much fun acting out this amazing whodunit as we do watching them. Everyone acts and emotes at the top of their considerable form. Nothing looks rehearsed or out of place. Everyone completely understands the murder mystery genre and their role in the actual telling of the story. They also know how to shift blame, look guilty and lead the audience astray with false hopes and possible clues. And with Mann as guide and instructor, they completely forget it's 2018 outside and remain totally in sync with the play's 1930's setting, language, melodrama, mannerisms, language, stylization and period whimsy.

"Murder on the Orient Express" is a thrilling, exciting production that abounds with beauty, class, wit, sarcasm, intelligence and imagination. The script by Ken Ludwig is chock full of splendid witticisms, characters, dialogue and surprises. Emily Mann's direction is wonderfully inspired. The entire cast is simply amazing. The design team has created a three-dimensional work that is gorgeous to look at. And the story itself, is enjoyable enough to make you call the box-office the next morning to book seats for a return engagement or two. 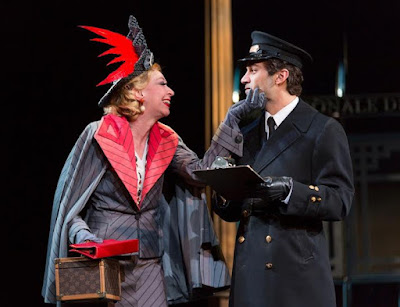 "Murder on the Orient Express" is being performed at Hartford Stage (50 Church St., Hartford, CT), now through March 25.
For tickets or more information, call (860) 527-5151
website: hartfordstage.org
Posted by JimRuocco at 4:28 PM