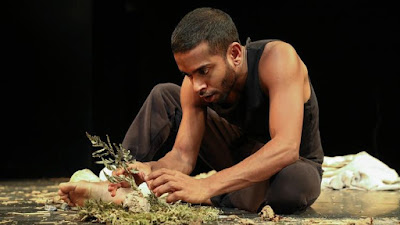 A morality tale of sorts that clocks in at a mere 69 minutes and unfolds with a dreamy, surrealistic yellowish glow, "The Prisoner" has the look and feel of an experimental, avant-garde theatre piece designed for acting students, drama festivals and West End fringe.

It's the sort of Brechtian/Beckett workshop stuff that challenges, baffles, excites and astonishes ballsy theatergoers who crave this sort of entertainment even when the ball drops, the narrative confuses and the ambition falters, if only fleetingly.

Regardless, there's something very provocative and dramatically enlightening about "The Prisoner," which arrives at Yale Rep following a prestigious overseas engagement, chock full of self-importance, moral trashing, self discovery, abstinence and redemptive obsession.

It bemuses.
It makes you wonder.
It gets you talking.
It stirs the senses.
It raises questions.
It maintains an odd sense of argument.

It is also part of Yale Rep's ongoing commitment to offer audiences topical works, world premieres and innovative plays that compliment its visible platform of contemporary stagecraft decidedly different from the season sked of other regional theaters across the nation.

The theater's recent presentation of "El Huracan" ideally reflects that notion as does its upcoming productions of "Good Faith (Four Chats about Race and the New Haven Fire Department)" and Cadillac Crew." 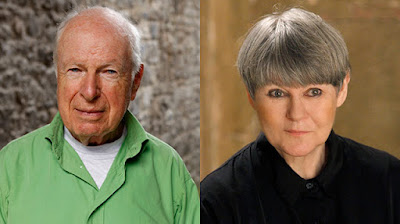 Written and directed by Peter Brook and Marie-Helene Estienne, "The Prisoner" is based on Brooks' own story idea, inspired by a visit to Afghanistan, where he heard the troubled story of an angry young man and murderer who had been sitting on an outside hill facing a prison for many, many years as punishment and absolution for his crime.

In this play, a pseudo-colonialist discovers a man living shamefully in the desert (he's forbidden to leave the spot even when certain characters offer to help him move on) tormented by his guilt, which, we learn is punishable by mutilation following 20 years in exile. As "The Prisoner" evolves, we also learn that the actual murder of his father was prompted by the statutory rape and pregnancy of a 13-year-old girl who also happened to be the man's daughter. The man himself also harbors incestuous thoughts and feelings for his sister.
Confusing, not exactly. But why this has happened in this very backward country (a name for this location is never mentioned) isn't exactly addressed full throttle. It's more of a plot device for the play's back story and evolution. 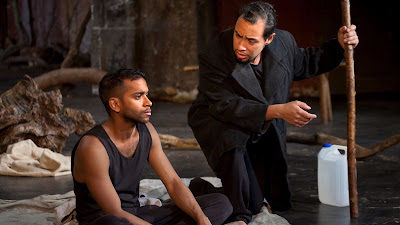 As directors, Brook and Estienne have an o.k. handle on the piece, which they shape and thrust forward swiftly enough. But sometimes, a very fascinating dramatic scene is cut too short, when it begs for more exposition and detail. Or it is followed by one in complete silence or one that isn't exactly dramatically fulfilling. It doesn't exactly derail the piece, but it doesn't invite applause either. A few rewrites, here and there, would improve things immensely. Not to worry, though. Other scenes are rife with splendid dialogue, great dramatic interaction and tension. And yes, the conflict, the struggle and the guilt of the central character, is strongly felt.

The best moment in "The Prisoner" is a playful one involving a rat, conjured up from carefully timed hand movement under a fold in a cloth which is used as a cloak. Directorially, it is played with workshop improvisation, mime and comic panache. But it does not end well. As expected, the rat becomes dinner. Delightful! 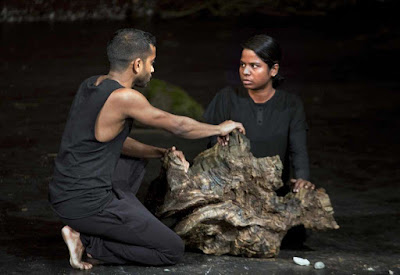 Elsewhere, the play exerts its abstract, metaphysical power more fluently during the second half  (35 minutes on and counting) as the characters wrestle for appropriate closure and resolution. Here, Brook and Estienne fuel their story with vivid humanity, naked simplicity and innate wisdom. It's a highly emotional journey shared by both the onstage characters and the audience, the latter, in part, being Yale Drama students, who, of course, are pushed agreeably to the edge of their seats enjoying parallels to the more satisfying "Waiting For Godot" and wondering how to it all come together and end before the actors gather center stage for their final bows.

"The Prisoner" stars Hiran Abeysekera as Mavuso, Herve Goffings as Ezekiel, Kalieaswari Srinivasan as Nadia/Guard, Omar Silva as Man/Guard and Hayley Carmichael as Visitor/Guard. All five bring authority, drive, compassion and purpose to their respective roles. They understand the play's concept, theme, format, dialogue and quick-change storytelling. They deftly handle the play's deliberate shifts in tone, time and pace. There's also a brittle sense of reality to their work that captures the varying mood swings of their different characters, offset by a focused, communicative honesty and signature body language. 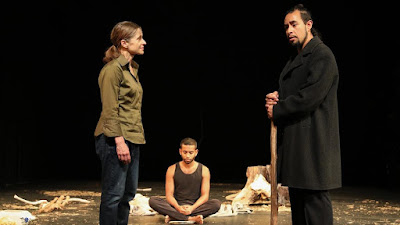 The action for the play takes place on a stage that is mostly empty (the actors are also barefoot) with the exception of some randomly placed twigs, branches, sawdust and some over sized, nondescript cloths that are used for blankets and warmth. Created by David Violi, the set design is eerily abstract and lends itself nicely to the telling of actual story.

Although "The Prisoner" has some minor flaws, the production is, nonetheless, first class. The story and its after effect, disturbs. The characters themselves are drawn with a chilling nuance. And finally, the performances and their adrenaline-fueled power shifts, make for compelling theater. 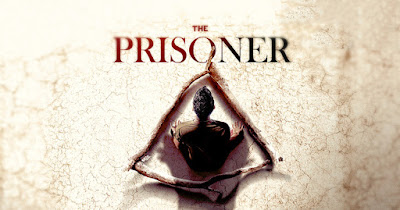