From the Desk of Jim R, Take 2, Column 118, A Review: "The Winter Wonderettes" (Castle Craig Players) 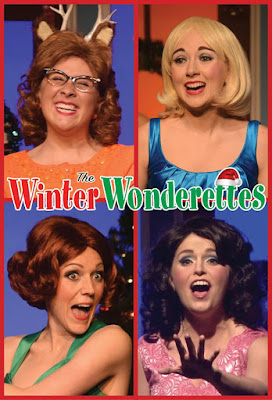 In Roger Bean's "The Winter Wonderettes," a saucy, colorful entertaining mix of holiday amusement, theatergoers are privy to a hilarious 1968 office Christmas party and variety show of lively energy, charm, style and commitment where just about anything can happen and does. 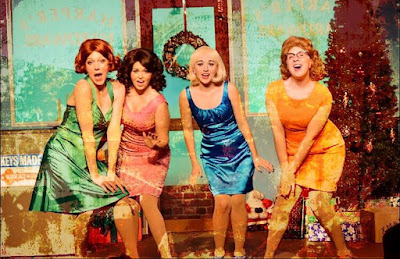 "The Winter Wonderettes" has it all.
This is one of those feel-good musicals that never seems to stop moving. From start to finish, it embraces the look and feel of the period from whence it came. It is packed full of good-natured humor, the kind that produces huge belly laughs in all the right places. It shakes and stirs the senses. It is supremely confident and candy-colored. It also fits the annual Christmas outing bill very nicely.

Director Ian Galligan brings a playful, intimate and nostalgic urgency to "The Winter Wonderettes," which gives the musical its required spirit, color, dazzle and nuance. No stranger to theater, as both actor and director, Galligan's credits include "Company," "Pippin," "Hello, Dolly!" "Brighton Beach Memoirs," "The Santaland Diaries," "The Drowsy Chaperone," "How to Succeed in Business Without Really Trying" and "Grey Gardens." 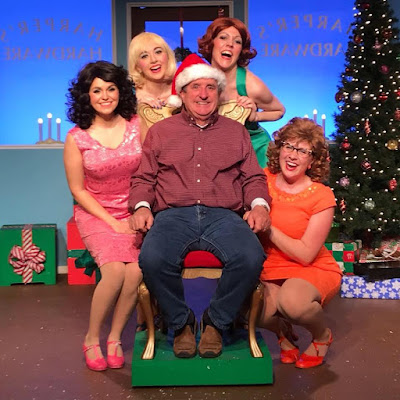 Here, he offers theatergoers a show of ensemble strength and palpable sheen, offset by superb contributions of wit, humanity, camp, surprise, cliche, candy floss and gob-smacking Christmas ornamentation. Shows don't come more funnier than this (at this particular time of year, anyway) and Galligan is primed and wonderfully adept at getting the show's unbridled humor across with massive wit and well-played ingenuity.

Things pop. Things snap. Things crackle. Things dazzle. Galligan, in turn, always knows what buttons to push, when to amp up the comedy and laughter, when to tug at your heart strings, who to thrust in the center stage limelight and when to ask his cast to grab one, two, three or four people from the audience to come up on stage for some improvisational holiday glee encouraged and shaped by his talented, onstage female foursome.

Galligan also knows how to knock you on your ass with, to coin a phrase from "Half a Sixpence," "a flash, a bang, a wallop, what a picture, what a photograph, what a joke, hat blown off in a cloud of smoke." He takes chances. He runs with them. He never looks back. He always knows where he's going. He challenges and excites his actors. He doesn't copycat and recycle. He loves the entire theatrical process from first rehearsal to opening night. And, that, collectively speaking, is what sets him apart from everyone else out there and makes his productions get the loudest roar of appreciation. 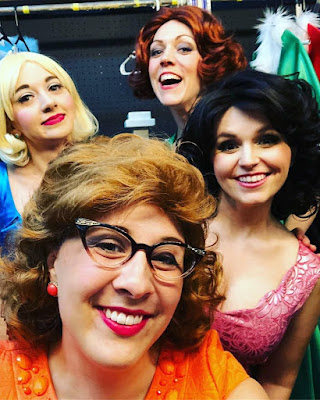 Listening to these holiday standards come alive under the buoyant musical direction of Chris Coffey is enough to lift anyone's spirits. Yes, we've heard all of them before. Yes, we know most of the lyrics. Yes, we can't resist the urge to hum a bar for two. And yes, we can't help but become teary-eyed when a particular song or two evokes a fond remembrance or two. Then again, that's the point, isn't it?

Regardless, Coffey's fresh take on Christmas music gives "The Winter Wonderettes" a playful musicality and invention that's chock full of pizzazz, flair, imagination and emotion. Doubling on drums and percussion, Coffey glides through the "Wonderettes" songbook with nary a halt or hiccup, deftly assisted by Harper Liles on bass and Nick Stanford on keyboard. All songs achieve their required emotion. Harmonies and lead vocals are conveyed with appropriated charm and whimsy. And all four principals not only nail the heartbeat and pulse of their respective characters, but with Coffey and company capably assisting their every musical move, they do it so ever engagingly. 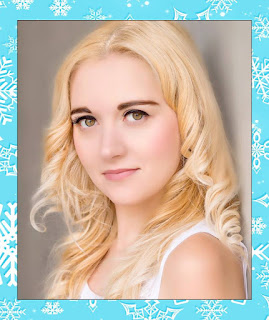 Choreography for "The Winter Wonderettes" has been envisioned in all its friendly, adorable glory by Chelsea Dacey who plays Suzy in the production. Evoking giddy memories of a time long gone by, she captures the groove, the beat, the silliness and the strength of the 1960's with plenty of creative  movements, rhythms and beats that hilariously recall the all-girl act entertainment from "The Ed Sullivan Show," "American Bandstand," "Hullabaloo," "Shindig!" and "Where the Action Is!"

Richly funny like a neon cartoon, it is satisfying, wonderfully original, fiercely energetic and cogent and irresistibly crafted. No two numbers are alike. Everything is splendidly orchestrated, from dainty swaying and gracious nods to synchronized hand gestures and turns, mirrored in the innocence and camp reality of the period. But, true to form, it is purposely played straight, which, by today's standards, makes it absolutely hysterical. It's a conceit Dacey develops and crafts with polish and gusto, using every girl group trick, cliche, expression, posture, gesture and color of the rainbow. 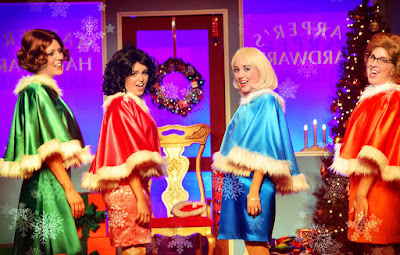 The performances of Chelsea Dacey (Suzy), Emma Czaplinski (Missy), Jennifer Del Sole (Cindy Lou) and Jessica Engster (Betty Jean) are both engaging and energetic. All four possess marvelous singing voices, matched by spot-on harmonizing, clear, carefully-placed phrasing and melodious song execution. Singing solo or together as one, they know when to power up and power down, how to achieve maximum value for every song they sing, how to focus on the lyric and when necessary, how to make it very, very personal.
As actresses, their individual characterizations (they each have their own personal stories, styles and frivolities) are fraught with real imagination, drive and purpose. Their comic camaraderie is completely in sync with Bean's giddy play text and its structural guidelines.  They also know how to get a laugh and how to build and shape a laugh, no matter, how corny the joke, without any form of calculation.