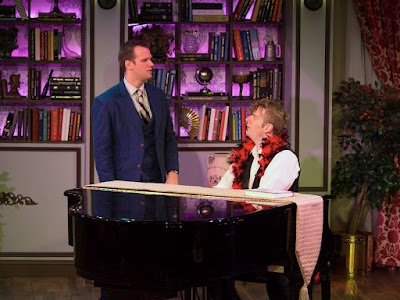 It takes incredible skill to pull off something as wonderful as as marvelous as "Murder for Two." Done right, every pratfall, planned fiasco, spit take, hoary grin, gasp, tick, sight gag and double take must be performed with gleeful solidity, timing and dash to support the craziness that follows. One wrong move, and it's curtains for everyone involved.

At Playhouse on Park, that, of course, never happens. Here, you get a very bold and classy production that exists mainly to kick you in the ass with laughter, knock you out of your seat with laughter and put you in the line of fire for amusement's sake. And oh yes, more laughter.

"Murder for Two," written by Joe Kinosian and Kellen Blair, gets it right every time using the same jellylike precision that made "The Play That Goes Wrong," "Noises Off " and "No Sex Please, We're British," such a hit with both Broadway and West End audiences. 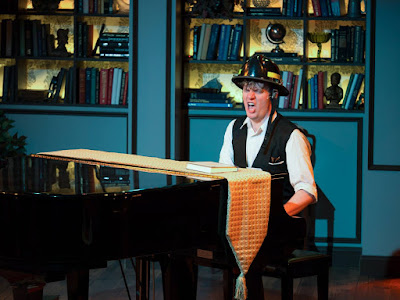 One big difference.
In this go round, there are only two actors.
And that's the goofball gag, so to speak.

And since this is a musical whodunit, both actors must be able to act, sing, dance and play the piano on cue. One of them must also be able to jump back and forth and round and round again to play a variety of male and female characters (i.e., the suspects) using different voices, faces, mannerisms and expressions in a single heartbeat. No costume changes either. Just a bottle of alprazolam on a nearby table. Just kidding about the tablets, folks!.

"Murder for Two" opens in the spacious drawing room of a Victorian mansion. It is the night of a surprise birthday party for Arthur Whitney, the celebrated author of many popular mystery novels. Unfortunately, he's shot dead in the play's opening minutes. Not to worry though. Officer Marcus Moscowicz, a charismatic rookie, pretending to be a detective, arrives on the scene immediately to interrogate the suspects, all of whom have a motive. Or do they? Its been said that Whitney exposed many of their real-life secrets in his books.

Whodunit?
That's the surprise of the night. 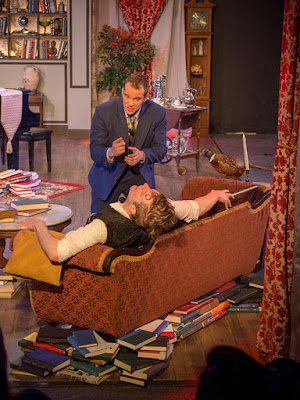 Staging "Murder for Two," director Kyle Metzger basques in the show's synchronized silliness, its vaudevillian gaiety, its unbridled camp and its crafty parody of murder mysteries, the suspects themselves and those grilling interrogation moments orchestrated by the play's ace detective. Creativity, in turn, abounds as Metzger delves headfirst into Kinosian and Blair's wacky play text to pull you in at all corners, throw logic out the window, pump up the adrenaline. dish out the laughter and fashion his own wave of farcical, shtick-fueled comedy.

This being a two character play dependent on the full exploration of musical theater, comic shtick and whodunit parody, pacing, the right kind of pacing, is essential in order for "Murder for Two" to take shape, breathe and move. Given the mechanics of the play script, you also have to fill the stage with a certain kind of movement and blocking that adapts immediately to the show's split-second comic  timing motif. Without it, "Murder for Two" would stop dead in its track and fade to black during its opening minutes.

Metzger, as director, comes to "Murder for Two" well-prepared. Assured, steadied and perfectly in sync with the play's concept, he never once executes a false move. There's a lot going on here but everything that happens unfolds with real purpose and comic ingenuity. With just two actors in tow (there's also a piano and a prop or two), he fuels the production with a fast and breezy animation that complements the material and keeps things moving merrily along at breakneck speed. His staging is both thrilling and collective as is his detailed execution of the actual suspects, all of whom have so many parts to their persona, you sit back in amazement at the quick-handed artistry and imagination involved in scene after scene, song after song and character after character. Bloody amazing! 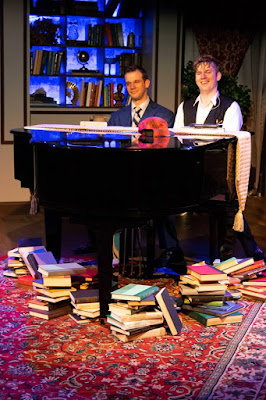 The musical score for "Murder for Two" has been written by Joe Kinosian (music) and Kellen Blair (lyrics). It contains 19 musical numbers: "Prelude," "Waiting in the Dark," "Protocol Says," "Dahlia Whitney," "A Perfectly Lovely Surprise,"  "Murray & Barb Flandon,"  "It Was Her," " Timmy, Yonkers & Skid,"  "A Lot Worse," "Steph Whitney," "He Needs a Partner," "Barette Lewis," "So What If I Did," "A Friend Like You," "Henry Vivaldi," "Process of Elimination," "Steppin' Out of the Shadows," "I Need a Partner/Protocol Says" and "Finale Ultimo (A Friend Like You)."

As with "Something's Afoot," another musical whodunit, the songs themselves are serviceable to the plot, the characters, the story and its evolution. They are fun, cheeky, whimsical, dastardly and happily romantic. Moreover, they never creep up out of nowhere or stop the action dead in its tracks. Instead, Kinosian and Blair craft a grab bag of musical entertainment that keeps the excitement of the show up as "Murder for Two's" musical twosome shift gears faster than a  coked-up chameleon  reveling in the show's mental fun house conceit and its many rhythmic colors.

At Playhouse on Park, musical director Melanie Guerin is best remembered for her musical showmanship on "In the Heights" and "Peter and the Starcatcher." Here, she is in exceptional form teaching her two stars the intricacies of the show's vocal score, its orchestrations, its ever-changing beats and rhythms and its live performance virtuosity. The dynamic duo, in turn, are in tip- top shape, playing melodies, hand switching among chords and deftly communicating the different emotions and reactions of the individual songs. Throughout "Murder for Two," they honor both the composers and the listener with intelligent, fully committed work at the piano, matched by a noticeable delicacy, dash, drama and challenging expressiveness. 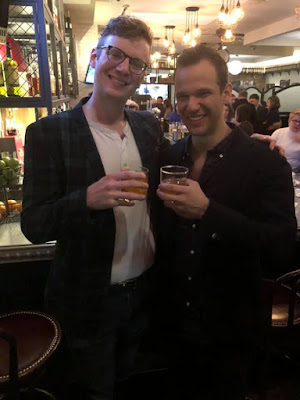 As the man of many faces and characters, Trevor Dorner plunges head first into the play's ripe, unabashed lunacy. His passion for acting, characterization and song and dance is set forth with amazing vision, clarity and preparation. His stamina is completely staggering as is his gumby-like ability to jump back and forth between characters, then jump back in again, using madcap voices, faces, flapping arms and crazy orchestrated  body language with breakneck speed and invention. You learn so much about acting just by watching him glide across the Playhouse on Park stage with perfectly pitched and practiced elan.

As Marcus Moscowitz, John Grieco does his straight man detective bit effortlessly as things all round him get crazier and crazier by the second. It's a fun part and one the actor invests with plenty of personality, dash, bewilderment and spirit. Like Dorner, he comes to "Murder For Two" with tremendous vitality and verve. He succumbs to the play's comic crackle with identifiable passion, snap and dedication. He also magically clicks with Doner making their onstage comic interplay snap, crackle and pop. Both play off one another with gleeful, wicked abandon.

Musically, Grieco and Dorner are in their element. Both possess Broadway caliber voices which makes their many musical numbers hit home on every level. It's hard not to be won over by their vocal charms, nuance and full-range perfection. No matter what they sing, they allow their voice to fill out the theater and complement the material, always finding the real meaning and personalization behind every musical moment.

"Murder for Two" is a wild, winning musical mystery romp chock full of falls, twists, turns, laughter, mix ups, cliches, schadenfreude and blighty trips of the fantastic. As directed by Kyle Metzger, it embraces and celebrates its position as crazed, gobsmacked entertainment. Its playful attack on the whodunit genre is triumphant. It also comes gift wrapped with two performances of the highest order by the very talented and charismatic duo of Trevor Dorner and John Grieco. It's a genuine feat of endurance that they are still standing after  90 minutes of musical chaos, dizzying dash, high farce, low farce and everything in between plus the mounting mayhem that ensues when the script asks one actor to switch gears and characters at the drop of a hat. Crikey! Not a hiccup in sight. 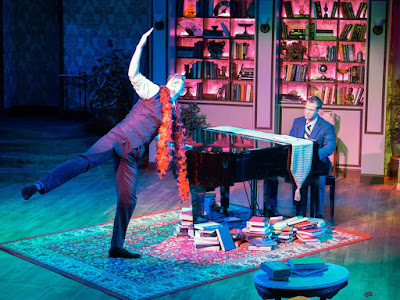