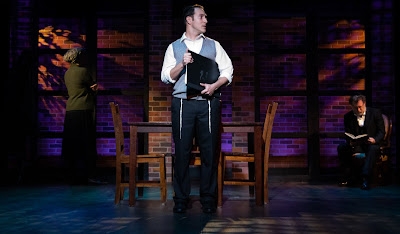 Playwright Aaron Posner's "My Name is Asher Lev," adapted for the stage from Chaim Potok's powerful novel of the same name, is the story of a young Hasidic Jewish artist torn between his love of art and religion and his moral obligations to his community. As student and descendant of many  celebrated Hasidic teachings that have been a part of his life ever since he was a child, Asher, in the eyes of his family, is expected to follow in the footsteps of Judaism and devote his life to the spiritual leader known as the Rebbe.
Upfront, however, Asher is not only rebellious, but spends most of his time painting pictures of naked women in addition to startling portraits of Catholicism including the Crucifixion of Jesus Christ. His parents are furious, of course, but once Jacob Kahn, a noted artist takes him under his wing, Asher is forced to decide whether or not he wants to follow his dream and become a working artist or pursue the religious beliefs dictated to him from his Hasidic people and family.

Potok's amazing writing and involving gift for storytelling is the backbone of Posner's intriguing drama and its conflicting views and portrayal of Hasidism and the Jewish culture. 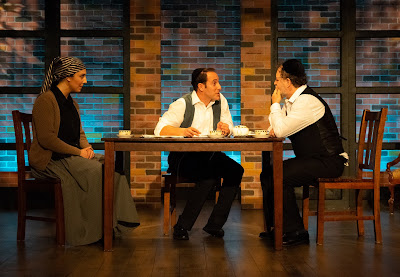 At Playhouse on Park, "My Name is Asher Lev" resonates with just the right amount of competence and interest to lure you in with enough immediacy and dimension to fully understand and realize the full power and potential of Potok's original work, now dramatized by Posner.

It has a conscience. It has a sense of purpose. It has Hasidic values and tradition. It has historical accuracy. It has drama and and humor. It has finely articulated dialogue and characterizations. It  superbly fleshes out the ongoing angst and tensions between the Hasidic and Orthodox Jews of Brooklyn's opinionated yeshi voth. It also integrates the ancient, practiced rituals of worship into the fabric of the story while exposing the modern ideas of Jewish faith and religion and the ongoing clash between fathers, sons, family and worshipers. 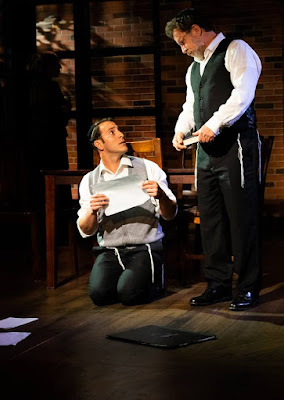 Joseph Discher, a talented auteur whose directorial credits include "A Moon for the Misbegotten," "The Violin," "As You Like It," "The Grapes of Wrath," "Galileo" and "Of Mice and Men," among others, has the right mindset and attitude to bring "My Name is Asher Lev" to life. He interconnects actor to audience. He says so much with just a pause, a beat, an expression, a move or just a line of dialogue or two. He gets the characters inside out, top to bottom and left to right. He also takes them off the page and onto the stage, smartly communicating their innermost desires, feelings and attitudes with nuanced proficiency and purpose.

Staging "My Name is Asher Lev," Discher's skill as director, comes from his decision to let the material breathe and evolve without any form of preachiness, long ramblings, stereotypes and annoying posturing, preening and melodrama. Here, you get scene by scene accounts that evolve with deep, dramatic truisms that hit home, toy with your senses and often break your heart. It's all free and carefully restrained. The closeness between actor and audience, which is always a plus at Playhouse on Park, also plunges you head first into the ongoing drama, a conceit the heightens the overall experience of the piece and its commanding story. 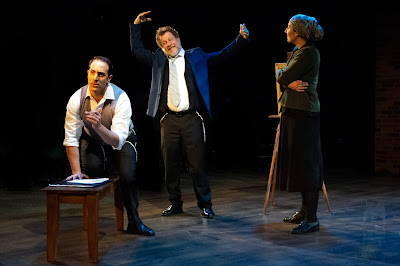 "My Name is Asher Lev" stars Jordan Sobel as Asher Lev, Dan Shor as the Men and Stephanie Londino as the Women. In the role of Asher Lev, Sobel is an amazing and gifted artist who never leaves the stage, moving back and forth as present day narrator to both younger and older versions of himself. It's a performance fraught with real energy and excitement and one that deftly captures his character's coming of age struggles, his guilt for not respecting his parent's wishes and finally, his desire to break free and follow his heart, regardless of the consequences.
Shor and Londino, offer honest, driven and raw performances not only as Asher's parents, but as all of the other characters who populate Posner's  vivid drama. Changing accents, attitudes and costumes within milliseconds, they switch gears so cleverly and imaginatively, you often ask yourself, "Are those really the same actors?" which, naturally, of course, is meant as the highest compliment.

"My Name is Asher Lev" is a powerful, uplifting drama that unfolds with real urgency and depth.  Joseph Discher's direction is straightforward and compelling. The cast - all three- offer strong, solid, balanced performances that come from within. There's also a pressing seriousness to this Playhouse on Park production which makes it even more dynamic than it already is, if that is at all possible. 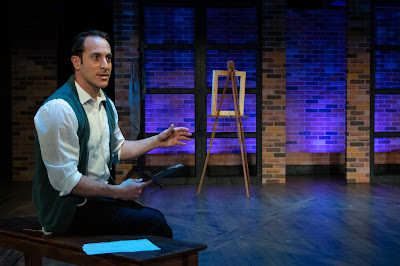 Photos of "My Name is Asher Lev" courtesy of Meredith Longo.