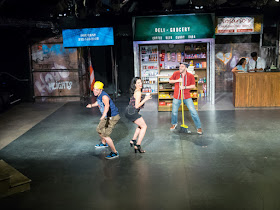 By James V. Ruocco
And so, it begins.

A store clerk longs to woo the woman of his dreams.
A refreshing frozen fruit Piragua of shaved ice awaits those customers willing to bypass the tempting offers of the nearby Mister Softee vendor.
A heat wave, a power cut, a blackout, a sunset.

A Fourth of July fireworks display of bright rainbow colors.
A stolen kiss between two people who are about to become lovers.
A winning lottery ticket.
A cafe con leche with cinnamon.
The frequent sounds of subway trains rumbling past apartment buildings, day and night.
A bodega owner's dream of returning to his parents' birthplace.
The loss of a business, an unexpected death, a chatty rap of syncopated awakening.
And, oh yes, music.
And oh yes, dancing.

That said, the electrifying sound of Hispanic zing and spirit you hear coming from the intimate, cozy environs of Playhouse on the Park is not only real, but absolutely contagious. Amidst cries of joy, surprise, frenzy and passion,  this celebration of life and the people who live it belongs to Lin-Manuel Miranda's pulsating rap-meets-salsa musical "In the Heights," which began life on Broadway back in 2008, long before "Hamilton," that $3,000-$6,000 a-ticket, hip-hop Broadway musical about founding father Alexander Hamilton became the rage of those who could afford it and those who couldn't, but deliberately maxed out their American Express card for three long years all for the sake of all things Miranda.

Not to worry.
You can see this one for much less.
Ticket prices range from $35 to $50, depending on your seating preference. 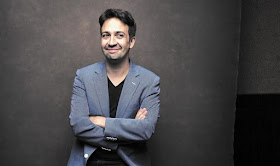 "In the Heights," which won the Tony Award for Best Musical and Best Musical Score, is set in the barrio of New York's Washington Heights neighborhood right near the tip of the borough. Here, a variety of  multi-lingual, multi-racial residents become Miranda's mouthpiece as they sing and dance about their troubled lives, their financial and romantic problems, their lusts, longings and fears, their familial conflicts and finally, their desire to break away from the community, in search of a better place...god willing.
And luckily for us, it all makes s perfect sense.


From the moment the incredible, tremendously talented cast of "In the Heights" at Playhouse on Park take center stage to sing the welcoming title tune that sets the musical in motion at the start of Act I to the joyful, tear-stained closing Act II anthem "When the Sun Goes Down," this splendid revival of Miranda's earlier work, delights, cajoles, excites and thrusts you into a frenzied state of delicious, sweaty delirium.

It is brilliant.
It is original.
It is timely.
It is in a class by itself.

The "In the Heights" experience is further enlivened by the musical's zesty Latin pop and salsa score and the spirited, completely moving play script by Quiara Alegria Hudes, which, almost everyone in the audience could identify with regardless of their economic, social, religious or educational background. Then again, that's the point, isn't it? 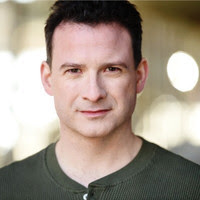 At Playhouse in the Park, "In the Heights" has been directed by Sean Harris, the theater's co-founder and co-artistic director whose directing credits include "A Chorus Line," "Angels in America," "Passing Strange," "Cabaret" and "Hair."  As director, he embraces the "In the Heights" material with passion, confidence and brio. The harsh realities of barrio life, the financial struggles and the continued tug-of war between people fighting for survival or escape, rings loud and clear. As does the different personalities of the individuals who populate the neighborhood.

A deft, understanding and determined director with tremendous insight and perspective, Harris, leaves no stone unturned. He has cast his production well, using performers who not only look the part, but act as though they actually grew up in the neighborhoods of upper Manhattan's Washington Heights. He also knows what buttons to push, who to thrust into the spotlight, when to turn up the heat and when to amplify a plot twist or an unexpected turn of events. And finally, his take on the musical's choice, cheeky Hispanic one-liners, body language and innuendo, speaks volumes. 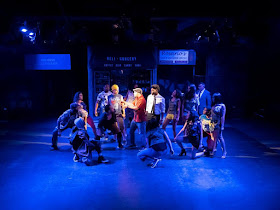 Dance is everything in a musical of this caliber, which as envisioned by Miranda, must, at all times, reflect moments from his own life, his own neighborhood, and the people he grew up with. So who better to do that than Darlene Zoller, who, like Harris, is also a co-founder and co-artistic director of Playhouse on Park.

The creative genius that is Zoller could actually blow the roof off the West Hartford venue. The sparks, the electricity, the fire, the passion and the fluidity of movement she ignites is contagious, amazing and ovation worthy. For starters, the show's effervescent style, look and overlaying themes of actual life in the barrio is realistically imagined through Zoller's heavy use of rap influences, hit hop, break dancing, street dancing and merengue.

That's not all. There are streetwise cusps and signals, pulsating bumps, twists, grinds and lifts and round-and-round the floor dance patterns, offset by intricate Latino and salsa rhythms that give a three-dimensional pulse to the proceedings at hand. 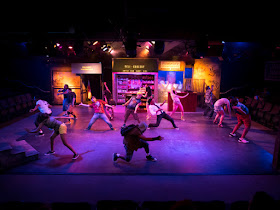 Everyone that participates in Zoller's musical tableaux is at the top of their game. There's no strain, no mistakes, no uncertainty. Just dancers, singers and cast members doing what they love best, enhanced by an ease and understanding of dance movement. Things are performed with such contagious flourish and theatricality, you actually believe these dances really came from the streets of Washington Heights.

Lin- Manuel Miranda's intricately layered music and lyrics for "In the Heights" is crisp, inviting, distinct and kaleidoscopic. Everyone has his or her own song to express their inner thoughts, feelings and desires.  Nothing is thrown it just for the sake of giving certain leads and supporting players extra stage time. Nor is anything in the music and lyrics overly preachy, corny or dripping with sentiment.
Everything is mapped out perfectly. Songs unobtrusively advance the plot and its ever-changing moods. There are showstoppers, glossy comic numbers that reflect the in-your-face life of the barrio, sweet and sassy ballads, tender duets and others that are designed to get under your skin and linger long after "In the Heights" has ended.

With musical director Melanie Guerin standing watch with ten very talented musicians, the vocal diction of the cast, in both English and Spanish, is dynamic and wonderfully precise. Full-bodied ensemble numbers generate authority and heated passion. Breakout vocals with one, two or three characters, contain the same balanced pulse, imagination and allure. Moreover, Guerin and company are not just playing the score, they are living it. Big, big difference! 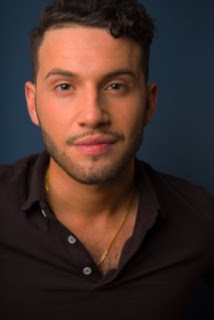 In the role of Unsavi de la Vega, the role originated by Miranda in the 2008 Tony award-winning Broadway production,  Niko Touros is a natural showman and entertainer who clearly enjoys being on stage, singing, acting and narrating the "In the Heights" story.  He is sexy. He is shy. He is vulnerable. He is charming. He is animated. He is personable. He is also an actor who can get everyone up on stage front and center for a big, celebratory neighborhood dance or shed massive tears when a beloved character is suddenly taken away by death during the first half of Act II. Lastly, he brings a sense of urgency to the proceedings that keep things real and reflective despite familiar themes of chasing dreams, financial debt, a better life and a romantic sub-plot than prompts memories of Tony and Maria from "West Side Story."


Sandra Marante, cast in the pivotal role of the street-smart, take-charge, vivacious Daniela, is commanding, sexy, vibrant and wicked and comical. She is so in sync with the material, the music (vocally, she is absolutely dynamic), her character and her role in the story, never once do we think she is acting. She is the real deal. We not only get what she does and why she does it, but we understand her character's desire to close up shop (she owns a beauty salon) and move to the Bronx. We cheer her every step of the way, hoping she will succeed. 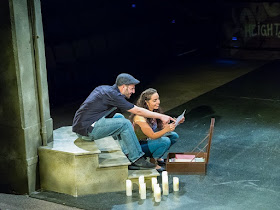 The very beautiful and charismatic Analise Rios is well cast as Nina Rosario, She is vigorous, plucky, resolute and high-spirited. She truthfully projects the portrait of a young woman who made it out of the barrio, only to return home (she has dropped out of Stanford University) troubled, confused and uncertain about the path that lies ahead. She is well matched opposite the the very talented Leyland Patrick who portrays Benny, a black dispatcher for her father's cab company who doesn't speak a word of Spanish, but tries to pull off his difficult feat in one of the play's hilariously timed comic sequences. And when both characters fall in love, a la "West Side Story," we gladly cheer them on, knowing they won't suffer the same fate as Tony and Maria did in the popular Tony Award-winning musical. 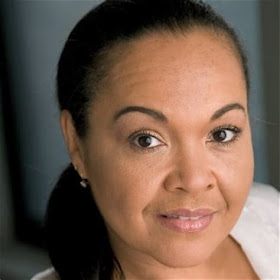 In the role of "Abuela" Claudia, the neighborhood barrio matriarch who has become grandmother to most of the musical's characters, Amy Jo Philips gives a three-dimensional performance that is so beautiful, so controlled and so real, you just want to hug her and never let her go. In the script, her character is the one who has looked after Usavi after his mother died.
From the moment she appears on stage, it's impossible to take your eyes off. She commands your attention whenever she engages in conversations with the characters around her, reveling about a zest for life, forgotten dreams and passions and pathos-steeped gallantry. Vocally, she is dynamic and yes, she literally stops the show when she takes center stage to sing "Paciencia Y Fe," an impassioned song of encouragement. 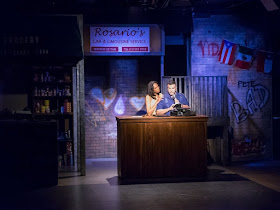 As Kevin and Camila Rosario, the owners of a not-so-profitable gypsy cab company, which they are forced to sell so their daughter Nina can realize her dream and return to college, JL Rey and Stephanie Pope believably communicate their character's ongoing troubles through song, dialogue and characterization. With "Enough," Pope delivers a searing vocal that projects Camilla's loss of patience regarding her husband and daughter's arguments and deceits.

Other standout performances come from Nick Palazzo as Sonny, Paul Edme as Graffiti Pete, Sophia Introna as Vanessa and Willie Marte as the neighborhood Piragua Guy.

Spicy, soulful and sizzling, "In the Heights" celebrates life, togetherness and survival through the eyes of its creator Lin-Manuel Miranda. The musical score, chock full of rap, pop, salsa and hip hop, is beautifully articulated by the Playhouse on Park cast. The dancing is festive, funky and effective. The contemporary feel of the book and its modern slant toward neighborhood life warrants attention. And finally, the overall experience of "In the Heights" is memorably captured in this pulsating, cutting edge musical entertainment that pulls you right into the world of its colorful inhabitants using the kind of energy and exhilaration Mr. Miranda is famous for. 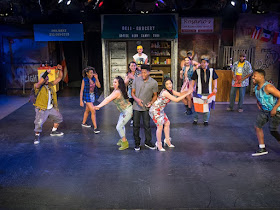