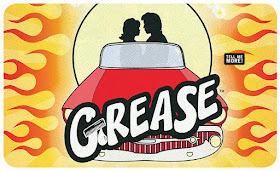 By James V. Ruocco
"I want to see it again."

This is "Grease" like you've never seen before.
And that is great, great news.

At Ivoryton, the cast is racially diverse, a concept that brings a refreshing dynamic to the story and its popular characters.
Some of the musical numbers have been vocally re-imagined or reinvented.
And finally, more attention is paid to the script and its individual characters. 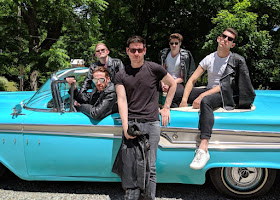 That said, "Grease" is the musical event of the summer.

It's ambitious.
It's witty.
It's exciting.
It's powerful.
It's fluid.

It is yet another crowning achievement for Ivoryton Playhouse whose stellar 2018 theater season has included one hit after another from "The Fantasticks" and "Love Quest" to the recent "A Night With Janis Joplin."

Directorially speaking, Todd L. Underwood is the ideal choice for "Grease." With a trunk load of stage musicals to his credit including "Saturday Night Fever," "Man of La Mancha," "Rent," "West Side Story" and "Chicago," he brings a tremendous insight, style and uniqueness to every production he stages by always going that extra mile, shaking things up a bit and making a change or two to the material that benefits the production, his vision and the actual performance itself.

First and foremost, he is not a copycat. Nor is he one to sit back and go the paint-by-numbers route with this revival of "Grease" and its overly familiar story, characters, songs and dances. His "Grease" is fresh, invigorating, unique and different.. There is nothing dated, soppy or corny about it. Instead, it is brimming with newness, style and individuality. 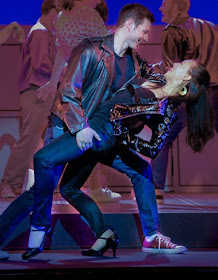 As "Grease" evolves, Underwood never repeats himself,  replays a joke or takes things for granted. He keeps the musical spinning and whirling from one scene to the next, but firmly rooted in the 1950s time period set forth by its Broadway creators. He also has done his homework by smartly integrating some of the rough and raunchy body language and innuendo of the original 1972 Broadway musical into his production minus the four-letter words that eventually were exorcised completely once the 1978 movie version came out. Elsewhere, he amps up the volume with some very sexy gyrating and bold dance moves. And he actually enlivens....much to the delight of the audience....the bare-ass show-and-tell antics of Rydell High's "mooning champ," the one and only Roger.

Nothing happens just to happen.
With Underwood at the helm, every actor's move, every gesture, every smirk, every smile, every foul gesture, every beat, every nuance and every line delivery cries 1950s. Nothing is rushed. Nothing is out of place. Nothing gets lost in the translation. As "Grease" plays out, Underwood gives his entire cast a back story, fully fleshed out characterizations, a sense of individuality and a real purpose for their actual placement in the story, the musical numbers and the dances. He also gives his actors some marvelous bits of 1950s stagecraft and blocking maneuvers which they reenact effortlessly. 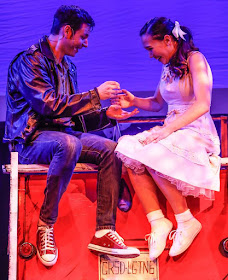 Given "Grease's" 1950s setting, attitude and mentality, Underwood, who also doubles as choreographer, stirs the pot, so to speak, with appropriate dash, wry amusement and nostalgic theatricality. The addition of a "Jersey Boys" upper level playing area at the back of the stage mixed with a pop-out, three-dimensional song/dance tableaux meant to fill every nook and cranny of the Ivoryton Playhouse stage, gives this "Grease" an electricity and pulse that heightens every single one of the musical numbers and dances.
The good news: Underwood doesn't go for the obvious. He's an original.
And that, for a musical that's been revived and revived, decade after decade, is something of a major accomplishment. Take, for example, the opening number "Grease Is the Word," which finds the entire cast of "Grease" front and center singing, harmonizing and dancing to their own individual beats and rhythms. It is not only an amazing choreographic feat that is ovation worthy, but one that lets you know that this is not your typical, average production of "Grease." It is so much more. 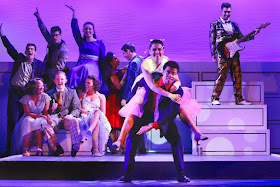 "We Go Together" retains the fun, playful camaraderie and exuberance it is meant to have, using staging and choreography similar to that of the 1972 Broadway production. "Greased Lightnin' " explodes with the notched up energy and fuel its creators intended. "You're the One That I Want" amps up the heat with appropriate drive and sex appeal. And "Born to Hand Jive" unfolds with just the right amount of dizzying frenzy and momentum that never once drops.

Musically, "Grease" retains most of the Jim Jacobs/Warren Casey songs from the original 1972 Broadway production including "Summer Nights," "Freddy, My Love," "Those Magic Changes," "It's Raining on Prom Night," "Greased Lightnin'," "We Go Together" and "Mooning." The production also uses songs from the 1978 motion picture including "Grease Is the Word," "Sandy," "Hopelessly Devoted to You" and "You're the One That I Want."

At Ivoryton Playhouse, musical direction is provided by Michael Morris,  a very talented musician  whose credits include "Dreamgirls," "Rent," "Saturday Night Fever" and "A Night With Janis Joplin." Like Underwood, Morris brings a unique freshness and snap to the musical numbers that other revivals sorely lack. Here, he re-imagines certain vocals by adding ensemble players or supporting cast members to the piece, backed by some brilliant, impeccably sung harmonizing that takes each song to an entirely different level. He also retains the musical's 1950's acerbic commentary, its playful wickedness, its tangy usurps and its wholesome melancholy and sincerity.
And the entire cast (leads, supporting players, ensemble) have great fun bringing the show's many musical numbers to life, traditionally or in freshly minted, new interpretations. 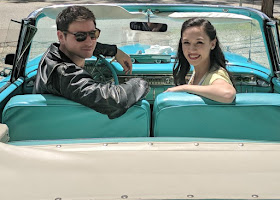 Looking like a cross between Jerry O'Connell's cousin and Tony from "West Side Story," Johnny Newcomb glides perfectly into the role of Danny Zuko, offering a slightly different, more believable  portrayal of the popular Rydell High School greaser that grounds him firmly into reality instead of comic book caricature. He's got Zuko's moves, swagger, persona and smile.  He also brings an endearing, boyish charm to the part which works perfectly opposite Immanuel. And vocally, everything he sings from "Summer Nights" and "Sandy" to "You're the One That I Want," is delivered with confidence, honesty and gusto.

From the moment she first breaks into song, Kimberly Immanuel, last seen as Luisa in Ivoryton Playhouse's dazzling production of "The Fantasticks," has a radiant charm, sweetness, intelligence and vulnerability about her. Her Sandy is neither one-note, flat-footed or cardboard cutout. Instead, Immanuel offers a grounded, free-spirited, three-dimensional portrait of a 1950's high schooler that is real, raw and unafraid to speak her mind regardless of the consequences. She is a force to be reckoned with, a trait that the actress not only believably portrays, but allows her to bring additional nuance to the original book material, thus, making it jump off the page instead of just sitting there.

Vocally, she is at the top of her form. Her heartfelt, endearing rendition of "Hopelessly Devoted to You" is as good as it gets. And her transition from good girl to bad girl at the end of Act II is so convincing, it's true....the other Sandy has truly left the building. 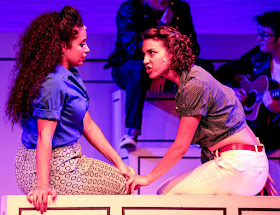 Rizzo, played by Alyssa V. Gomez, has attitude and vamp, with a dash of coolness, which is exactly right for her wise-cracking character. She also has a moody, bluesy voice that connects perfectly with her big solo "There Are Worse Things I Could Do." As Marty, Taylor Lloyd makes all the right moves and turns "Freddie My Love" into a genuine showstopper. Corey Candelet's Eugene is nerdy, twitchy and prone to falling completely on his face, a crazy bit of stage business, which the actor pulls off swimmingly. Natale Pirrotta pumps up the adrenaline as Kenickie in "Greased Lightnin' " as does Luke Linsteadt's Doody in "Those Magic Changes." Taylor Morrow, as Roger, the mooning champ of Rydell High, not only stops the show with his crazed and hilarious musical turn "Mooning" (he is joined by the amusing Audrey Wilson as Jan) but his all-around performance is 100 per cent better than that of  Walter Bobbie who played Roger in the 1972 Broadway production and Hunter Foster who portrayed the same role in the 1994 Broadway revival.

"Grease" is a great addition to summer theater going at Ivoryton Playhouse. It is fun. It is snappy. It is playful. It is smart. It is full of great voices. The familiar story accentuates its relevance through a uniquely different eye. Musically, it is chock full of melody, sentiment and personality. And lastly, the very idea of using a racially diverse cast keeps its soaring and soaring and flying high.
And oh, yes. You'll want to see it again. 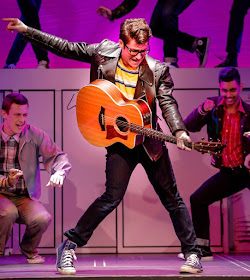