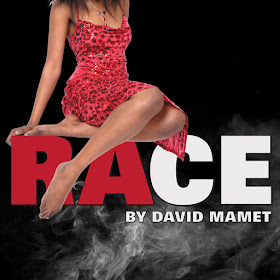 "Race is the most incendiary topic in our history. And the moment it comes out, you cannot close the lid on that box. That may change. But not for a long time while."
David Mamet, Playwright, "Race"

The impeccable head-on swagger and urgency of playwright David Mamet's writing gives "Race" an emotional flourish and depth that creates the necessary sparks in TheatreWorks/New Milford's compelling presentation of his controversial 2009 play.

This is one of those plays that demands and commands your attention from start to finish as it exposes the uncomfortable truths, realities, power games and prejudices behind the pending court case of a well-known, white American male accused of raping a young, black woman in a hotel room.

Is he guilty?
Is he innocent?
Is the case too impossible to win?
Well, that depends. 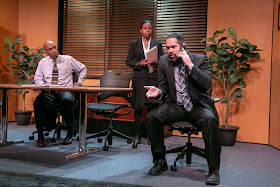 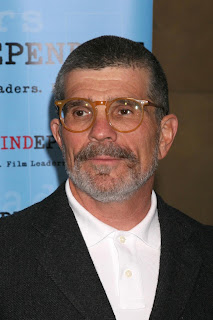 As with "Speed-the-Plow," "Oleanna" and "Glengarry Glen Ross," " Mamet's provocative, edgy, hot-topic play is anything but ordinary.
It presents testy debates designed to challenge its audience.
Its questions and answers are surprising.
Its strategies are savory and controversial.
Its blunt rage and exaggerated expletives are full on.
And when it's over, there's plenty to think and argue about.
Mamet wouldn't have it any other way.

"Do you know what you can say to a black man on the subject of race?" the black lawyer asks the white defendant. "Nothing."

There's always an acutely truthful resonance at the heart of any David Mamet play and director Francis A. Daley finds that pulse and runs with it while staging "Race." The focus, of course, is on the acting, but Daley, as director, finds the heartbeat and conscience of the piece and creates a taut, verbally intense theatrical work that ignites the playwright's talky soundscape, its piercing certainties, its contrasting arguments and its lawyer/client lingo and resolve.

But that's not the only selling point in Daley's nuanced, theatrically intense production. His fascination with Mamet's writing, the play's conceit, the power play of the individual characters, their observations, their thoughts, their confidence and their obvious fight for survival, is addressed with extraordinary tension, depth and creativity. In turn, the play's dialogue, its words and actions, some of which are misunderstood, taken out of context or simply just raw, real and shocking, hit home with piercing, studied impact. 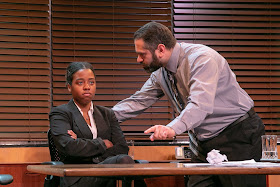 The entire 85-minute play is set against the backdrop of Leif Smith's handsome, functional set design, which in "Race," is an attorney's spacious conference room that houses fake plants, a big meeting table, four chairs, a central glass window covered with brown, closed blinds and a bookcase. The trick, of course, is to keep things moving and centered, with just the right amount of necessary movement and conversation to keep "Race" flowing without any form of hesitation, unnecessary stage blocking or claustrophobic maneuvering.

That said, Daley's staging is fast, fluid and involved. There's only minimal movement when needed or necessary. This, directorial process, in turn, works most advantageously. It also allows the audience, as a voyeur of sorts, to focus solely on the story, the playwright's language and the verbal ping pong match between the four central characters. You believe every moment here, and, willingly go along for the ride, often examining and re-examining your own personal beliefs and prejudices. Then again, that's also the point of the piece and one that Daley makes quite relevantly. 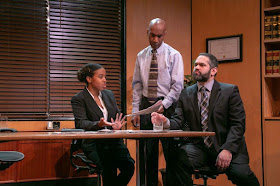 "Race" stars Francis A. Daley as Charles Strickland, Kevin Knight as Henry Brown, Aaron Kaplan as Jack Lawson and Danique Ashley as Susan. As Strickland, a famous, wealthy white billionaire accused of raping a young black woman, Daley, with script in hand (more on this, later), is cunning, focused, indignant and clever, which is exactly what the part calls for. It's a stirring performance and one that Daley attacks with profound professionalism.

As Susan, the newbie African-American legal associate who questions the mind-bending maneuvers and confrontational arguments of her co-workers, Ashley is the real deal. She's genuine. She's professional. She's articulate. She's honest. She gets Mamet. She understands Mamet. And she loves being part of this production. Just watch her. Her gestures, her inflections, her expressions and her line delivery, only further that notion. But who is Susan really? There's a mystery to the character  which Ashley downplays in the beginning of the play. But as "Race" evolves, the set up for who Susan really is, is finally revealed.

As Brown and Lawson, Knight and Kaplan, both outspoken and cynical, work tirelessly to carefully expose the many layers of Mamet's dicey story, its "who's scamming whom" undercurrents, its outspoken conversations about race and its fueled, believable desperation. Throughout "Race," they are completely in sync with the play's barbed intelligence, its dressed-up legal distractions, its professional lingo, it's cynicism and its topical conscience. They succeed on all levels. As actors, they are savvy, personable, excited and grounded. Moreover, you believe everything they say and do without hesitation.

"Race," as written by David Mamet, is a shrewd, entertaining, intelligently written play that delivers lots of arguments about race, law, discrimination, guilt and innocence. It gets the pulses racing. It gets you thinking. It packs an emotional wallop. It is well directed by Francis A. Daley. And the cast, with Daley taking center stage for an ailing actor, delivers smart, sharp-witted performances that heighten the play's allure, its argumentative dialogue and its stinging after effects. 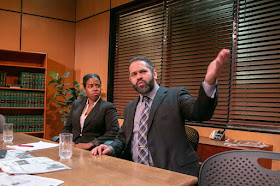 Photos of "Race" by Ghostlight Photography