From the Desk of Jim R, Take 2, Column 189, A Review: "Joseph and the Amazing Technicolor Dreamcoat" (Sharon Playhouse)

Long before "Jesus Christ Superstar," "Evita" and "Cats," Andrew Lloyd Webber and Tim Rice created a modest pop cantata called "Joseph and the Amazing Technicolor Dreamcoat," an 80-minute musical set "many centuries ago, not long after the Bible began."

It was colorful.
Ir was tuneful.
It was entertaining.
It was innocent.
It was fun.

Today, "Joseph" is still going strong as it dances to a more spectacular beat and wildly celebrates its origins in grand, cheerful fashion while retelling the familiar story of an idealistic dreamer who clashes with his jealous brothers who conspire to sell him into slavery in Egypt. The plan, of course,  backfires once Joseph reveals his dream interpretation powers and rises (remember, this is a musical) to the very top of Egyptian society, reaping all its tempting and materialistic rewards.

To bring the story of  "Joseph and the Amazing Technicolor Dreamcoat" to life, Sharon Playhouse has enlisted the talents of Russell Garrett who is making his Playhouse debut in the dual roles of director and choreographer. No stranger to musical theatre, Garrett crafts an irresistible production, framed and sung with tremendous warmth, discipline, style and energy. The show oozes charm and rainbow sparkle from start to finish with a flash-bang-wallop mindset that remains utterly perfect and engaging throughout the two-act musical.

Garrett sets his "Joseph" in the 1960's, a clever and outrageous conceit that breathes new life into the oft-produced musical and sends it through the starting gate with plenty of dash, wit, color, nuance, invention and juicy period mania. None of that corny and tired Bible stylization here. In its place, you get wonderfully-timed bits, bobs, gadgets, props and song-and-dance combos that harken back to the la la land of yesterday uncorking fired up memories of London's Carnaby Street, "Goldfinger," Burt Bacharach, Petula Clark, "Shindig," "Hullabaloo," "Yellow Submarine," The Grand Ole Opry, Federico Fellini, "West Side Story" and the iconic "Rich Man's Frug" from "Sweet Charity," which was choreographed on Broadway and in the 1969 film version by Bob Fosse. Dance wise, song wise and scene wise, this crazed nostalgic inventiveness gives this production a "Wow!" factor like no other. And the "Wow!" factor keeps on coming as Garrett puts his talented cast through some fancy foot-work (his choreography is frenzied, fiery and on tap) that heightens this thrilling re-vitalization of the popular "Joseph" story.

Written by Andrew Lloyd Webber (music) and Tim Rice (lyrics), the musical score for "Joseph and the Amazing Technicolor Dreamcoat" contains 21 songs. They are "Prologue," "Jacob and Sons," "Joseph's Coat," "Joseph's Dreams," "Poor, Poor Joseph," "One More Angel in Heaven," "Potiphar," "Close Every Door," "Pharaoh's Story," "Poor Poor Pharaoh," "Song of the King," "Pharaoh's Dream Explained," "Stone the Crows," "Those Canaan Days," "The Brothers Came to Egypt/Grovel, Grovel," "Who's the Thief?" "Benjamin Calypso," "Joseph All the Time," "Jacob in Egypt," "Any Dream Will Do" and "Joseph Megamix/Finale." The actual score, written in 1968 (this was the duo's first outing) is an eclectic mix of musicality that is both cheeky and broad with crowd-pleasing tunes that range from Elvis-style rock and 1960's pop to French chanson, calypso, country western and pleasurable Broadway.

What's best in this "Joseph" is the orchestral wonder and flourish of Jacob Carll's musical direction, which vibrantly remasters music from over 50 years ago with a richly elucidated wallop more in sync with today's musical theatre than its nostalgic past. The show, of course, still brims with its own life force - visceral, melodic, in the moment - but the overall effect is much more moving and sumptuous, perfectly attuned to the action, the concept, the story arcs and the varying themes and undercurrents at hand.

With Carll on keyboard working alongside a handpicked team of exceptional musicians (Steve Siktberg (guitar), Steve Austin (trumpet), Mike Lee (bass), Rich Conley (reeds), Tim Herman (drums) ), every one of the show's songs - "Prologue," "Jacob and Sons," "Close Every Door," "One More Angel in Heaven," "Any Dream Will Do,"  to name a few - emerges a winner. To complement the talents of the show's leading players, some of the songs have been purposely re-imagined to utilize their splendid vocal ranges (higher belt notes, for example) and musical virtuosity. This, in turn, adds much more depth to their interpretations. Elsewhere, Carll produces a clear, pure sound of real depth and harmony with the ensemble cast, all of whom possess abundant vocal qualities, insight and stamina. With harmonies worked out to the very last detail, the choral blending is immaculate, expressive and impressive. 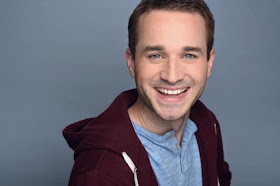 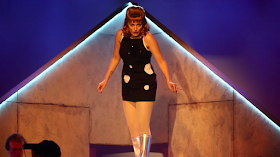 "Joseph and the Amazing Technicolor Dreamcoat" stars Max. J. Swarner as Joseph, Merrill Peiffer as the Narrator, Michael  Glavan as Pharoah/Reuben, Michelle Lemon as Mrs. Potiphar, Sam W. Snyder as Naphtali/Butler, Bill Morris as Jacob/Potiphar, Mijon Zulu as Simeon, Aidan Farren as Levi, Ryan Thomas Curley as Issachar, TJ Swetz as Asher, Nick Lamberti as Benjamin, Tony Harkin as Judah, Daniel Pahl as Dan, Michael Doliner as Gad and Jeffrey Jannitto as Zebulon. Everyone is perfectly cast for their respective song-and-dance roles, which they agreeably project using the right mindset, attitude, charm and theatrical savvy the musical calls for. Vocally, they master the melodic musicality of the Webber/Rice score and take it to new levels under  Carll's exceptional tutelage. And as dancers, they have great fun re-enacting the dance fever of the 1960's in all its Technicolor glory wearing eye-popping Carnaby Street fashions and other period regalia, stylishly designed by costume designer David Jordan Baxter who design work is AMAZING.

In the lead role of Joseph, Max J. Swarner is handsome, charismatic, personable and charming, which is exactly what the part calls for. Vocally, he delivers every song his character sings with polish, smoothness and raw emotion. His showstopping take on "Close Every Door" and "Any Dream Will Do," which Carll re-orchestrated to suit the actor's beautifiul, big-voice sound, is worthy of a standing ovation or two. As the show's Narrator, Merrill Peiffer comes to Sharon Playhouse with a voice, a vocal ability and a charm that impresses at every turn. Her performance is heartfelt and sincere. And she tackles the Webber/Rice score in ways that make it sound fresh, new and wonderfully alive.

Bright, colorful and breezy, "Joseph and the Amazing Technicolor Dreamcoat" is a stunning musical entertainment that embraces the bounce and pulse of the popular Andrew Lloyd Webber/Tim Rice score, its simplistic storytelling, its buoyant conceit and its jubilant song-and-dance merriment. The dream cast -  all ages, all types - has great fun bringing this feel-good musical to life. Their peppy, winning charisma gives the two-act musical a purpose that other incarnations lack. They also bring fun and innocence to the piece along with a certain vitality and freshness that goes a very long way. 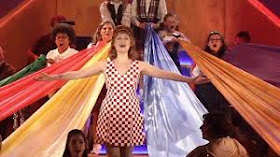 "Joseph and the Amazing Technicolor Dreamcoat" is being staged at Sharon Playhouse (49 Amenia Rd., Sharon, CT), now through August 25.
For tickets or more information, call (8600 364-7469.
website:sharonplayhouse.org
JimRuocco at 2:00 AM
Share