From the Desk of Jim R , Take 2, Column 22: A Review, "The Most Beautiful Room in New York" at Long Wharf, New Haven 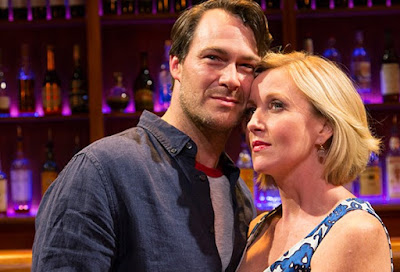 By James V. Ruocco
The casting of Matt Bogart in "The Most Beautiful Room in New York" is just one of the many joys of this sweet, intimate, new character-driven new musical, featuring music by David Shire and book and lyrics by Adam Gopnik. Stepping into the role of David (a proud restaurant owner whose business is about to go belly up), just five days before the first preview, is no easy task. I mean, when you think about it, it's absolutely crazy. It's daunting. It's performance suicide. It's unheard of.
All that blocking. All that dialogue. All that music. All those songs.
I'd hop the next train back to New York, toss my mobile in the East River, go into hiding and not come out until three months later.
But not Bogart. 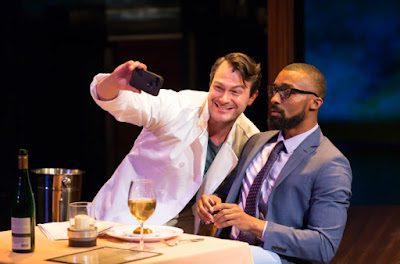 Standing tall, proud and confident on the Long Wharf stage, he's a master craftsman. With script in hand, (well, bits and pieces of it, anyway), he plunges head first into "Beautiful Room's" first  preview performance with such natural brio, style and panache, you are never once reminded that during a specific song, scene or character exchange or two, he might have to glance down at the white, yellow-highlighted paper in his hands for a cue, a note or an important bit of stage business. If he does, it really doesn't matter. He knows the part. He plays the part. And he sings and acts the part, ever so beautifully.
It's an eleventh hour scenario that Bogart pulls off quite swimmingly. He's so real, so alive and so connected, you can't help but cheer and applaud his every move. It's yet another great casting coup for Long Wharf  and just about everyone else connected to this snappy, thought-provoking production.
But wait there's more. 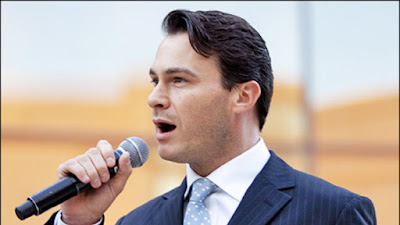 Now that previews are gone, rehearsals are finished and opening night is just a distant memory, Bogart is back in the spotlight for more of "The Most Beautiful Room in New York." As before, he's polished, quick and focused. But now, he owns the part. Not that he didn't before. This performance is just a bit more tweaked and centered. His singing is just as dynamic as it was the first time he wrapped his big, rich voice around the dutifully-layered Shire/Gopnik score. He just does things a little differently. And he's still a great showman and entertainer. 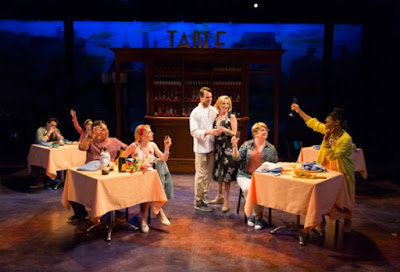 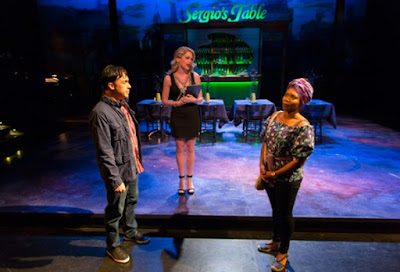 "The Most Beautiful Room in New York" is set mainly in Manhattan's Union Square. Here, Bogart's character David runs a nice little family business called "Table," which isn't doing terribly well. The menu isn't chic or trendy. The bills are not being paid. And "Table's" new lease costs $35,000 a month. Ouch! Double ouch!
That's more than a mouthful of problems and conflicts for a musical. But during the second and third course, David, in an effort to survive, is forced to do business with Sergio (the equally charismatic Constantine Maroulis), an egotistical former business partner who runs a very profitable food chain empire. There's also Claire (Anastasia Barzee), David's beautiful and sexy wife, who, had a fling with the dashing Sergio a long-time ago. Who knows? She could (or might) be tempted to bed Sergio again. 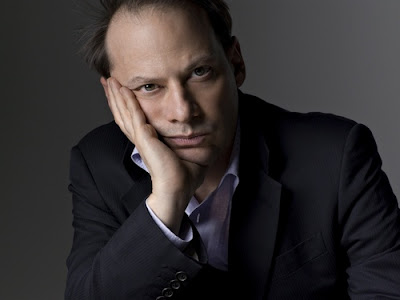 The musical score for "The Most Beautiful Room in New York," as written by Shire and Gopnik, contains a variety of enjoyable, pleasant-sounding songs that are serviceable to the plot and the characters who sing them. They are jazzy, bluesy, popish, romantic and playful. Nothing is thrown in just for the sake of being thrown in. Or just because, the so-called musical handbook of theater dictates how many songs a production should have for both Act I and Act II. Here, everything is carefully structured, planned and distributed amongst "Room's" very talented cast. Musical director John McDaniel and his exceptional seven-piece band keep things merrily rolling along. It's all quite a very pleasurable experience.

Going forward, however, "The Most Beautiful Room in New York” could benefit from additional songs for Sergio (one or two perhaps) along with some additional scenes for the character. When you have someone as talented and personable as Constantine Maroulis in your musical, you want him on stage, front and center, not in his dressing room standing around waiting for the stage manager to say, "Fifteen minutes till your next cue." 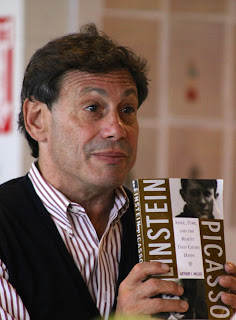 Directed with the usual style, heart and soul that categorizes most of his work, Gordon Edelstein crafts a breezy, heartfelt production that wisely addresses the problems facing small businesses, the threat of competition, the financial burdens and the losses. He also brings a real sense of urgency, belonging and anxiety to the piece, which, in turn, makes it play more believably as a two-act musical. Edelstein really makes you care about all the characters, their individual stories and how everything will (or will not) be resolved at the conclusion of Act II. 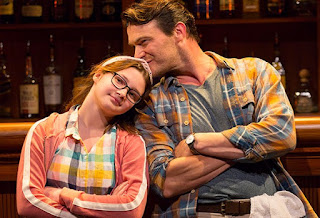 Edelstein is also an actor's director. He cares about the actors. He understands actors. He gets them. He is open to ideas. He is also open to change, which, in a brand new spanking production like this one, is very, very important. Obviously, "Room" is going to be shopped elsewhere. You can feel it the minute you enter Long Wharf. New Haven is definitely not going to be its last stop.

"Something's Growing" a pungent and melodic opening number gets things off to a quick, rousing start. The harmonies, the rhythmic blending, the beats and the pauses, are perfectly and always in sync. "There's Always a Wait For Your Table, another hot, piping hot song achieves a similar feeling at the start of Act II. Claire's songs ("David," "Planet David in the Stars"),  David's songs (Bitter," "Your Table Will Always Be Waiting," "Please Don't Misunderstand") and Sergio's songs ("Take My Life," "And Then I'll Go"), some, of which are also performed as duets, are workable and flavorful enough, and never once stop the show dead in its tracks. You simply savor and enjoy the moment. 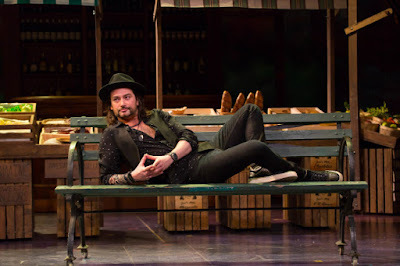 Constantine Maroulis possesses a rich, distinctive voice that is full of charm, wit, punch, drama and drive. He's completely comfortable with Shire's music and Gopnik's precise, often sophisticated lyrics and never gives us less than 100 per cent when acting or singing. The songs suit him perfectly, but we definitely want more. Most definitely.
Acting wise, he always knows what buttons to push. The role of Sergio, of course, suits him like a glove. The character's ego, his dastardly ways, his sarcasm, his Faustian mannerisms and exchanges, are suitably nuanced and performed with devious relish. If anyone's doing "Damn Yankees," anytime soon, Maroulis is your man. 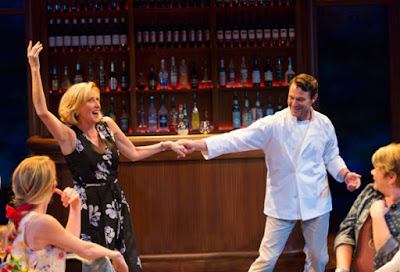 In the role of David's wife Claire, Anastasia Barzee is beautiful, sexy, alluring and complicated. Her singing projects a radiant sound and expressivity when called for. She can also be bold, brittle, direct and passionate when the music and lyrics demand it. To her credit, she and Bogart behave and act like a real married couple. We also get and understand her attraction to the overly complicated Sergio. 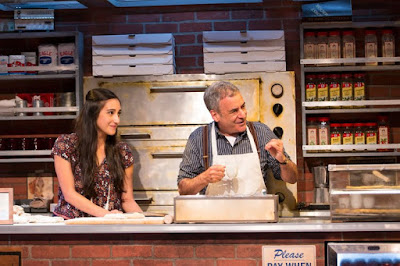 Comedy is KING and I mean KING in bold capital letters whenever Mark Nelson appears on stage. In the musical, the actor plays Carlo, the proud, sometimes misunderstood owner of Carlo’s Anarchist Pizza, a cozy Bensonhurst eatery that he's been running for years. A master at comic timing, expression, holds, beats and delivery, Nelson's sheer comic brilliance gives "Beautiful Room" a refreshing, comic zing. Whether singing the pivotal, but comic "Espresso!" and "Slice of Life"  or just acting, he is Jackie Mason and Jerry Stiller, Italian style. You eagerly await and applaud his every entrance. Elsewhere, Shire also gives him a great comic zinger about President Donald Trump, which, pretty much sums up how America really feels about the current occupant of the Oval Office. 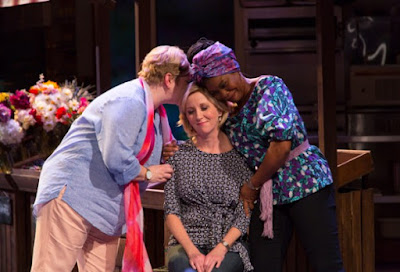 The show's resident lesbian couple, played respectively by Danielle Ferland (Gloria) and Darlesia Cearcy (Phoebe) lend themselves nicely to the proceedings. Ferland, incidentally, originated the role of Little Red Riding Hood in Stephen Sonsdheim's 1987 Broadway musical "Into the Woods" and was truly magnificent. Here, she doesn't get as much exposure as her musical and acting talents warrant, but with a little tweaking, maybe, Shire could give her more do. The same applies to her very talented co-star who rocks the house with her potent musical delivery of "Market Forces.". 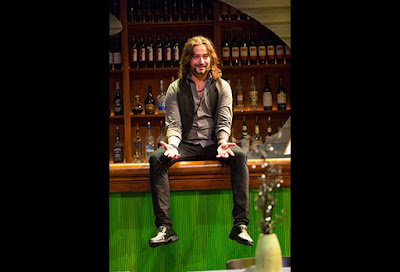 "The Most Beautiful Room in New York" is being performed at Long Wharf Theatre (222 Sargent Drive, New Haven) through May 28th. 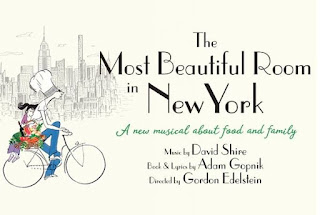 Posted by JimRuocco at 1:29 PM