From the Desk of Jim R, Take 2, Column 32, A Review: "A Midsummer Night's Dream" (Hartford Stage) 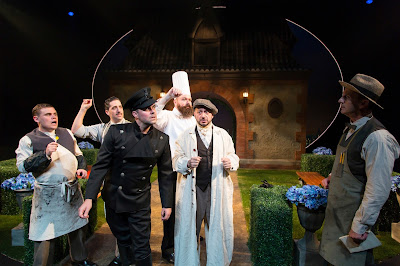 Darko Tresnjak's ability to breathe new life into all things Shakespeare is in a class by itself.  And rightly, so.
As a director, he has never once been hampered by the Bard's rambling exposition, his over reliance on plotlines, his many, many characters or his well-oiled, component pieces that must be played straight with absolutely no changes, no cuts or edits or accessorized experimentation. 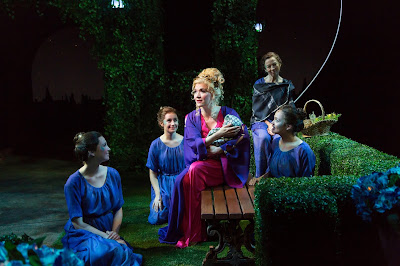 But like a cinematic Federico Fellini or Ingmar Bergman, Tresnjak dances to his own tune. He does it his way...and only his way... much to the delight of the actors, the audience, the production team, the dramaturgs, the benefactors, the starched suits and their droll wives, the LGBTQ community, the students, their freshly-scrubbed and not-so-scrubbed professors and lastly, the critics. And that, in turn, is what makes his productions snap, crackle and pop and explode across the stage in every color of the rainbow without dampening or detracting from the emotional weight of the evening.. 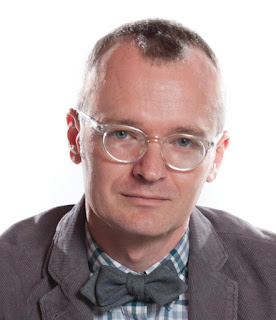 Darko Tresnjak is a genius. He is a showman. He is an auteur. And lastly, he is an original with so many tricks of his sleeve, one is always in awe of his expressive choices and zestful creativity, anxiously awaiting his next move, or, in this case, his next production.

"A Midsummer Night's Dream," Shakespeare's darkly comic, resplendent, opus, puts Tresnjak, at the very top of his game. It is refreshing, astonishing, exuberantly funny, crazy, magical, sexy, delightful and broadly eclectic. There's a lot going on in this joyous Hartford Stage production, but it all make perfect, perfect sense. Delicious, innovative, bold and wildly unorthodox, it is so much fun, you'll want to see it again and again. 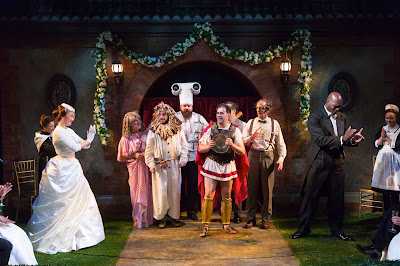 What is most impressive is Tresnjak's fastidious attention to Shakespeare's four different sets of characters: The Court of Theseus, The Young Lovers, The Mechanicals, The Fairies. They purposely have a different look, manner, style, speech pattern, language and uniqueness about them that keeps them afresh and afloat in their own particular stories.
The Court, for example, recite Shakespeare like members of the Royal Shakespeare Company. It's a distinct, clever process that works especially well. The Young Lovers offer polished recitations like A-level Eton scholars or no-nonsense Harlem-schooled students. There's also a youthful vitality about them that heightens their aura throughout the night's proceedings.

The Mechanicals, are rife with Fellini-like comic bits, stretches, bawdy puns and sexual innuendo that has everything to do with Shakespeare or nothing at all. Regardless, you're with them every step of the way, laughing and smiling at their mad, twisty persona's. The Fairies, in turn, have an ethereal quality to their words and actions that also suggest RSC training, but with a dash or two of fairy dust. 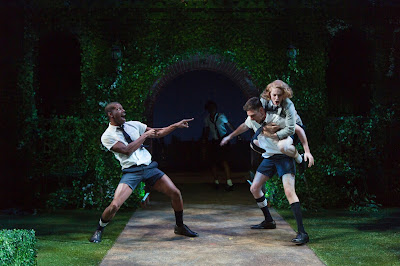 There is also plenty of well-orchestrated, well-placed fun in Tresnjak's frenzied staging, particularly with The Mechanicals that runs the gamut from three-ring circus and silent movie homage to English melodrama and farce that's superbly staged, acted and delivered. Lots of happy tears steaming down your face can't be helped during these particular interludes and dalliances. And beyond the immediate horseplay, this wild and outrageous group have a definitive feeling for Shakespeare, so nothing ever gets lost in the translation.

Elsewhere, Tresnjak crafts a slick theatrical piece that is ingenious, fast-paced, layered and textured. There is a wonderful sense of time and space about the piece. Every entrance, exit, dash of comedy, drama or twinkling bit of fairy dust, is strategically placed and centered. The musical bits, the songs, the dances and the sounds of the night blend seamlessly together without any calculation, whatsoever. So impressive, so delicious, so consistent.

The plot, in brief: It's a magical night in Athens and the surrounding woods. Four runaway lovesick students find themselves in the middle of a raging dispute between their proud families and the king and queen of the fairies. A troupe of amateur actors get sidetracked while trying to rehearse a play. And a fairy named Puck, armed with a special love potion and wickedness, tricks some of the characters into falling in love with the first person they set eyes upon. Ever, so clever. 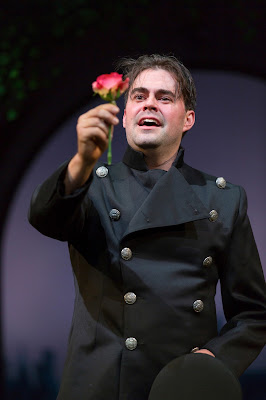 The comic glue of  "A Midsummer Night's Dream" falls rightly into the hands of the tremendously talented John Lavelle who plays the part of Nick Bottom with such dash, wit and personality, if Shakespeare were alive today, he'd probably shout "Bravo" a dozen times or more from the rafters. The character of Bottom, which, as everyone knows is famous for getting his handsome head transformed into the goofy-looking donkey by the elusive Puck, is tailor-made for Lavelle who dashes and romps across the "Midsummer" stage for well over two hours without ever missing a single beat. He is funny. He is crazy. He is over the top. He is Barnum and Bailey with a twinge of Federico Fellini and "Saturday Night Live" thrown in for extra measure. And  he's always chock full of wonderful surprises that Tresnjak pulls from his magical bag of tricks over and over without the slightest hesitation. What an actor! What a performance! 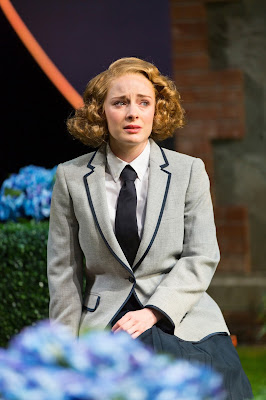 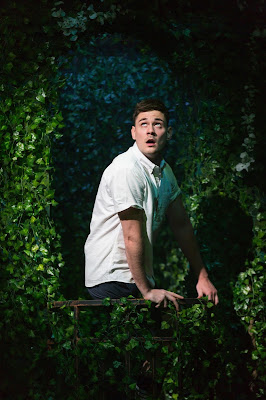 There is a beauty and grace to Jenny Leona's blonde, attractive Hermia that not only piques your interest whenever she's on stage, but makes her character one of the most vital and alluring of the star-crossed lovers. There is an urgent truth to her performance, her line delivery and her characterization that is both enchanting and riveting.  Tom Pecinka makes all the right moves as Lysander, the handsome, boyish young man who is forced to overcome many obstacles in his pursuit of love. He is a natural, resourceful actor who gets lost in the forest of mischief and merriment and aptly proves his character is a lovesick force to be reckoned with. 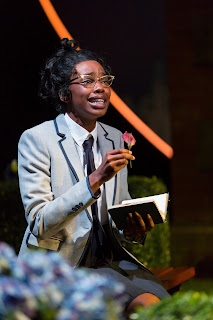 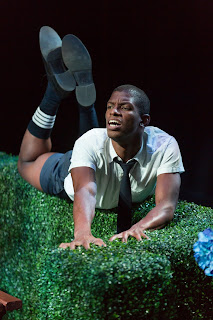 As the lovesick Demetrius, Damian Jermaine Thompson deftly portrays the angst and frustration of a fickle young man who falls quickly in and out of love. His pained expressions and decidedly different Shakespearean line delivery are absolutely perfect for his character and his participation in the story. Fenda Laure Jacquet, as Helena, delivers wonderful, impeccably timed pronouncements about love and its weepy, serious dilemmas and virtues. Like Thompson, she connects beautifully to the piece, its complications and delicious enchantment. 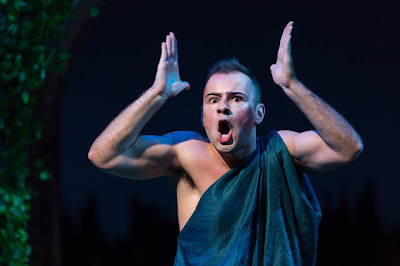 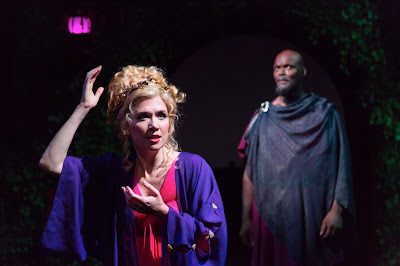 Will Apicella brings plenty of mischief and merriment to the sprightly, quick-witted Puck.  He sprints about the stage with ethereal agility, an enchanting Shakespearean voice and magical demeanor.  Playing the dual roles of Theseus and Oberon, Esau Pritchett is a commanding, brooding actor that offers two uniquely different characterizations like a skilled RSC professional.  The very strong and principled Titania, the fairy queen who is intoxicated with a love potion that has her fawning over a donkey's ass (Bottom, to be precise),  is majestically rendered by the beguiling Scarlett Strallen, a dynamic, charismatic actress with enormous stage presence, range and personality. Her characterization has plenty of allure and passion. Her perfect Shakespearean tongue would make every member of the RSC green with envy. Elsewhere, she plays the part of Hippolyta with appropriate demand, intention and icy snobbery. 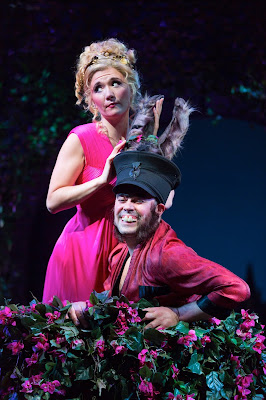 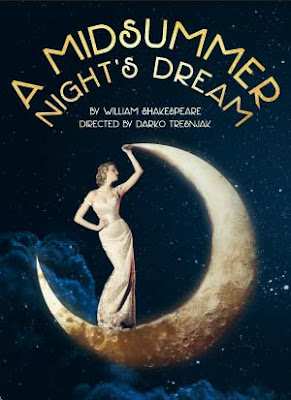