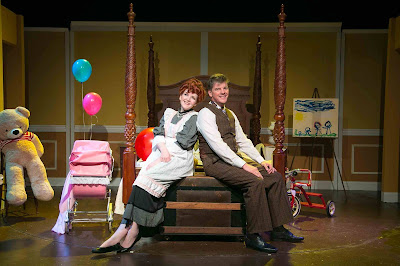 By James V. Ruocco
A man.
A woman.
A wedding.
A life.
Welcome to the world of  "I Do, I Do," that popular 1966 Tom Jones/Harvey Schmidt Broadway musical that takes its cue from the 1951 play, “The Fourposter,” written by Dutch playwright Jan de Hartog and lovingly chronicles the married life of Agnes and Michael from 1895 to 1945 in ways that will make your heart skip a beat or two and flutter ever so engagingly.

Written by Jones, this two-character musical opens with a wonderful wedding scene, then, confronts the nervousness of two people in bed (a fourposter, of course) who've never made love before or have seen each other fully naked in the daylight, in the moonlight or anywhere else, for that matter. 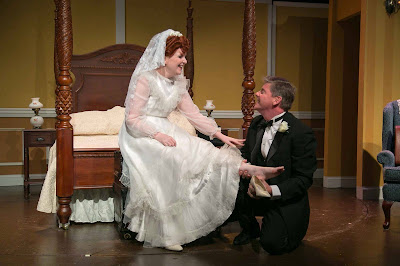 It's a beautiful, tender, romantic and comedic moment that jumps starts this simple little musical and sets the ongoing mood for what's to follow. Then, it delves head first in the private, professional and personal life of Agnes and Michael and finds humor and pathos in everything from the search for a husband's elegant vest and a wife's before-bed night cream rituals to the arrival of the first child where the husband experiences his own labor pains. Much later, it also copes with a wife's loss of self-esteem as the years finally catch up with her while her husband finds comfort in the arms of another woman.
Oh, no!
Oh, yes!
But not to worry.
It all ends happily much to the delight of the on-stage characters and everyone else in the audience. 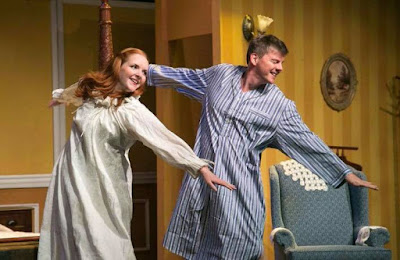 At TheatreWorks/New Milford, where "I Do, I Do" has been happily and magically reborn under the watchful eye of director/choreographer Bradford Blake and musical director Charles Smith, this production intrigues, cajoles, entertains, excites, explodes and delights. The casting of the very experienced Carey Van Hollen as Agnes and the equally accomplished Jonathan Jacobson as Michael is a stroke of genius on Blake's part. As is Blake's decision to place Smith at the piano. Together, this quartet turn this musical examination of marriage over five decades into a savvy, sparkly entertainment well worthy of a standing ovation or two. Or, maybe even, three.

Two character musicals can be especially tricky or tiresome given the fact that both actors are on stage for nearly two hours and have page after page of dialogue to remember, recite and act without ever missing a single beat. There's also a songbook of numbers in between the dialogue that asks both performers to sing, sing, sing. And dance, dance, dance.
Hard, yes.
Not really. 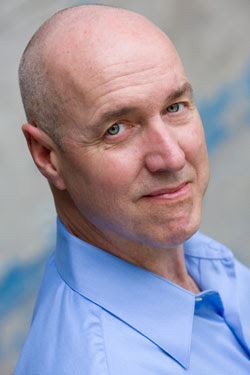 As evidenced in "Into the Woods," his most recent directorial effort at Musicals at Richter, Blake is not one to rest on his laurels. He knows how to paint and develop an interesting stage picture, sustain it and make it jump, fly, surprise and skip across the pavement. He casts his productions flawlessly. He's not afraid to take chances. And there is always a marvelous wonder and wit to the actual production itself.

"I Do, I Do" is no different.
Everything that happens on the small yet resourceful TheatreWorks stage is carefully envisioned,  executed and seamless. Never once does the action, the songs or the performances come to a screeching halt. Instead, Blake's anecdote of  married life is distinguished by a natural drive, sentiment, whimsy, spirit and wonderful sense of entitlement. And therein, lies its pulse and heartbeat.

The musical numbers for "I Do, I Do" are exactly right for the onstage story, its evolution and the characters (in this case, one man, one woman) who bring them so vividly to life. Among them: the title song, "Together Forever," "Goodnight," "I Love My Wife," "My Cup Runneth Over," "Love Isn't Everything," "Flaming Agnes," "Where are the Snows?" "What Is a Woman?" "Someone Needs Me," "Roll Up the Ribbons," etc.

At the piano, Smith works his magic quite beautifully. Everything is in sync with the on-stage proceedings from ballads, duets and solos to novelty numbers. Smith also produces splendid, dynamic vocals from both Van Hollen and Jacobson who clearly understand and communicate the veracity of the "I Do, I Do" musical score and the underlying message behind everything they sing. 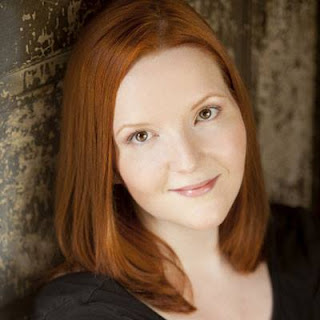 In the recent "Into the Woods," Carey Van Hollen gave one of the most memorable musical performances of the year at Musicals at Richter. It was real, raw, emotional and tender. As the Baker's Wife, a role that seemed tailor-made for the actress, she sang Sondheim's wonderfully complicated songs with snap, zest, passion, and precision.
In "I Do, I Do," Van Hollen  takes hold of the character of Agnes, makes it her own and brings just the right amount of color, shading, emotion to the part to keep it entirely emotional and honest. She sings beautifully. She acts beautifully. She know how to get a laugh without any form of calculation. And she is well-matched opposite Jacobson as Michael in much the same way as she was in "Into the Woods" alongside the charismatic Nathan Mandracchia as the Baker. 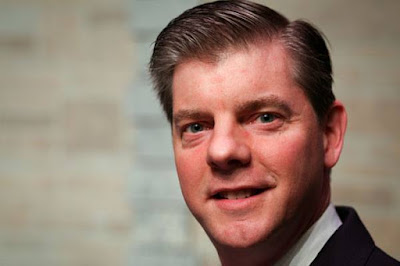 Looking very much like John Davidson's kid brother, Jonathan Jacobson is very much married to the part of Michael. He is dashing. He is charismatic. He is boyish. He is funny. He is ruthless. He is pompous. Like Van Hollen, he  knows how to play a scene to the fullest. He is a master at the droll, comic one-liner. He's reactions are expressions are flawless. And he's completely genuine, both vocally and musically. 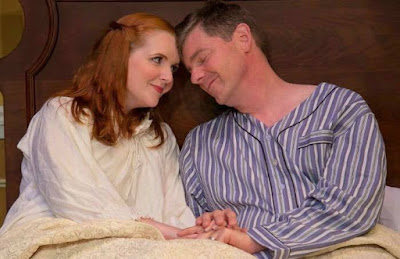 Posted by JimRuocco at 5:40 PM