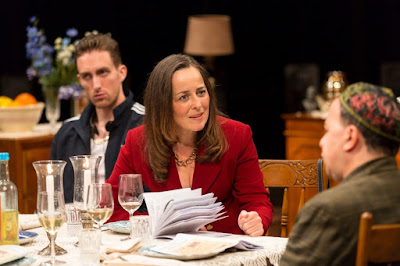 Is there a better moment or scene in theater?
A past of jangles and fragments, embodied  by secrets, lies and atrocities.
A fueled and fiery confrontation between a misunderstood mother and her estranged daughter.
A shock or two guaranteed to set heads spinning.
A family seder where chairs are knocked over, flowers are thrown across the room and glass frames with precious family photos are broken one by one and smashed into tiny little pieces all over the floor.
Elizabeth Williamson's staging of these and other moments in Sarah Gancher's explosive new play "Seder" is enough to blow the roof off  Hartford Stage, push the audience to the edge of their seat in a delirious frenzy, rally a standing ovation of the highest order and produce some very intelligent conversation long after the play has ended.
Astonishing.
Fascinating.
Riveting.
Dynamic.
Brilliant. 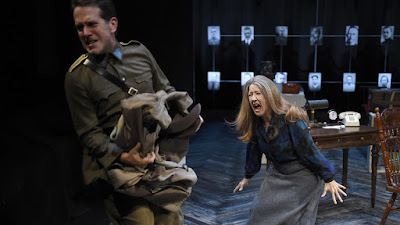 This is the world of "Seder," an unbelievable piece of American theater that shatters the closeted world of one family, vividly exposes its darkened past and present with startling fluidity and drama and gets under your skin in ways that leave you shaken and stirred.
Then, again, that's the point of this complex, marvelously constructed drama. It's designed to make you think, not only about the on-stage characters who bare their souls entirely, but make you examine your own life, your own family, your own past and present and lastly, a future where you may or may not live happily ever after.

The play, set in 20th century Hungary, begins with a woman, Erzsike, by name, entering the House of Terror, a Budapest museum, exhibiting various war atrocities and horrors. Moving through the exhibition, she immediately notices a photograph of herself on the Wall of Murderers. It seems that
Erzsike herself had worked in this very same building (she was a secretary), when she was younger and when it housed the Hungarian KGB.

Much later, she discovers that the photo's placement was not accidental. It was deliberately included in the exhibit by her daughter Judit, who, ironically, is being reunited with her mother later that night (they have not spoken in years) at the family seder. 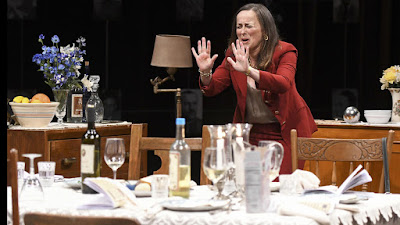 Staging "Seder," director Elizabeth Williamson brings a smart sense of truth, vitality, anguish, and realism to the proceedings. Never once does she make a false move or cloud the stage with any sort of odd calculation or movement. This is a sharp, well-envisioned drama, that wisely unfolds without any intermission. To actually cause a break or rift in the staging by having the audience retreat to the lobby for a 15-minute stretch or alcoholic refreshment would actually dampen or defeat the play's dramatic build-up and progression.

With Williamson at the helm, the play swims deftly between present and past, with each scene and remembrance enclosed in its own special reality and drama. Every scene, every moment, every character tick or line of dialogue is important to the "Seder" story. There are also some very clever bits of staging and technical tricks that separate the past from the present via some intricately designed sound and lighting effects. 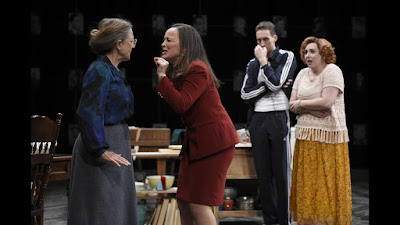 As devised by the playwright, "Seder" derives great strength from its choice, verbal confrontations, which, are loud, harsh, spiteful and in-your-face. Think "Who's Afraid of Virginia Woolf?" "God of Carnage," "The House of Bernarda Alba," to name a few. Here, the effect is the same. Bold, brazen, raw and real as Williamson and Gancher unite as one to make "Seder" vividly come to life at Hartford Stage. There also some very clever, healthy bits of humor interspersed between the play's heavier, dramatic moments.

Regardless, the absolute satisfaction of "Seder" actually comes from the cast behaving so terribly in three-dimensional roles that allow them to rip the shreds out of one another, tear up the scenery, scream and shout profanities, stomp madly about the environs of their stage space and have the absolute time of their lives. Thanks to both Williamson and Gancher, we feel their pain, every step of the way, even when some very, very ugly truths are exposed and the utter jolt and surprise of it all sends shock waves through the theater. 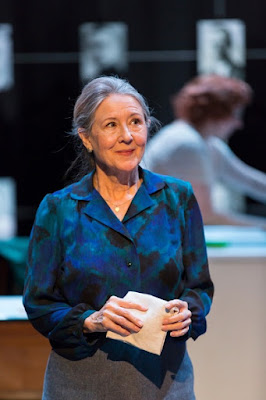 Mia Dillon is an exceptional, dedicated and clever actress who takes hold of a character, develops it, plays it and completely owns it. Here, in "Seder," she plays the older, misunderstood Erzsike who is often at odds with her family and in flashbacks, the much younger woman forced to endure the sexual advances and abuse of her boss Atilla, superbly played Jeremy Webb. It is a brilliant, illuminating performance. 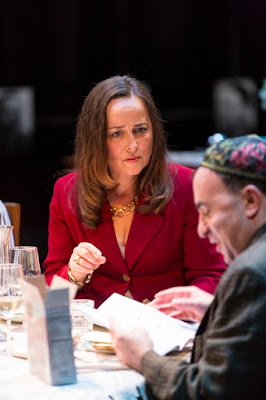 Birgit Huppuch's portrayal of the angry, spiteful and vengeful Judit is astonishing. Her rage, her voice, her body language, her facial expressions are so unflinchingly honest and real, you sit there completely amazed by it all. Her interaction with Dillon is absolutely perfect. The actual experience of seeing both actresses quarrel at such lengths literally will blow your mind. 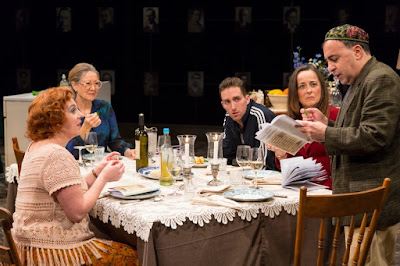 Julia Sirna-Frest brings just the right amount of belief to the slightly insecure younger daughter Margit. Dustin Ingram completely connects to the part of Erzsike's foul-mouthed, quirky son Laci. Steven Rattazi's David is the real deal. He gets some very funny lines while trying to conduct and get through the evening's celebratory seder. And his delivery of the actual Hebrew verbage would make every rabbi proud.

"Seder" is a riveting, satisfying drama with an intellectual, instinctive veneer. Yes, it's characters crash and burn. Yes, there's a lot of yelling and screaming. But there's nothing like conflict to rivet a crowd. And "Seder" travels this path every so convincingly. 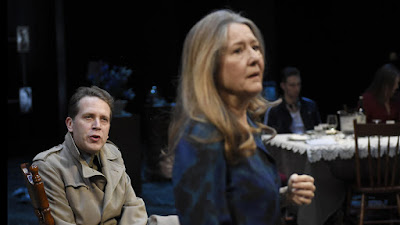 Posted by JimRuocco at 1:09 PM