From the Desk of Jim R, Take 2, Column 71, A Review: "Priscilla, Queen of the Desert" (Downtown Cabaret Theatre) 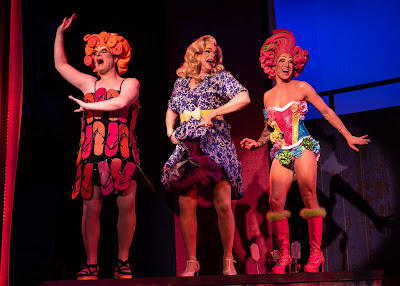 The stage musical "Priscilla, Queen of the Dessert," co-authored by Allan Scott and Stephen Elliott who wrote and directed the acclaimed film, retells the same story, but with bucket loads of outrageous camp and glitter, spectacle and pitch, crazy gags and mayhem, gender-bending costuming, frenzied dancing and a trunk full of pop songs from yesteryear that almost everyone in the audience knows, loves and remembers. 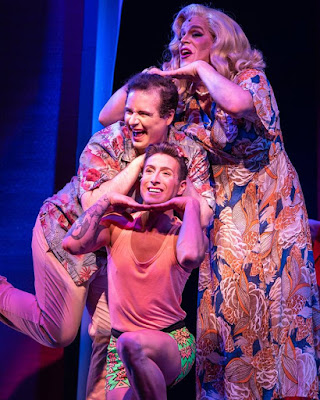 The Downtown Cabaret Theatre production of this acclaimed musical, has been designed and fashioned with enough color, spectacle and dazzle to blow the roof off this celebrated Bridgeport theater. Then again, that's the point of this kitschy, crazy and daring musical where camping it up and acting gay, straight, confused or curious, is perfectly acceptable along with human cupcakes, pink paintbrushes, sparkly high heels, flirty flamboyance and signs that say "Real Entry-Upon Request." 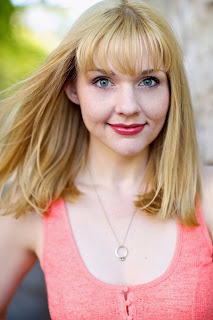 "Priscilla, Queen of the Desert" may be decked out with sequins, glitter, midnight-mad make-up and eye shadowing and gaudy drag regalia, but director Christy McIntosh-Newsom never once lets that get in the way of her directorial storytelling. Working from Stephan Elliott and Allan Scott's book, she gives the audience a very good time, chock full of sentiment, dash, wit, playfulness and candor. There's lot of energy on stage, which works to the musical's advantage. But when the music stops, she offers moments, characterizations and conversations that are as sincere and real as those indicated in the 1994 motion picture.

There's a lot happening on the Downtown Cabaret Theatre stage in terms of the musical's aggressive dance routines, the pop songs themselves, the show's many scene changes and its non-stop entertaining diversions. Yet nothing seems forced, calculated or out of place. McIntosh-Newsom always knows what buttons to push, how to make an important statement, what to define or refine and what to overplay or downplay. There's plenty of snap, crackle and pop to her directorial prowess. She also brings tremendous insight and understanding to the project, its glorification of drag queen performance as an art form and the script's underlying theme that it's o.k. to be different. 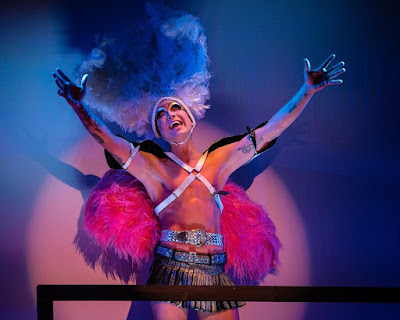 Musically, "Priscilla, Queen of the Desert" is jam-packed with a mega line up of disco songs, all of which have been carefully integrated  into the story and distributed among the three drag-queen principals, the diva trio and the "Priscilla" ensemble chorus of singers, dancers and actors. There's a lot of them, but, then again, this is a big, glossy musical, not a replay of the 1994 Aussie film, which was written for the screen and not for the stage.

Musical director Eli Newsom, whose previous Downtown Cabaret Theatre MD credits include the recent "Jesus Christ Superstar" and last year's "Spring Awakening" and "In the Heights," is the man in charge of bringing it all together. Positioned on keyboard 1, backed by Josh Sette (keyboard 2), Charles Casimiro (bass), Mark Dennis (trumpet), Christopher Cavaliere (guitar) and Gabe Nappi (percussion), he amps up the sound with enough charm, frenzy and wonderment to keep "Priscilla, Queen of the Desert" moving at breakneck speed much to the delight of the audience and everyone on stage.

What follows is a campy, pulsating sing-along soundtrack of pop hits from yesterday including "It's Raining Men," "I Will Survive," "Hot Stuff," "True Colors," "What's Love Got to Do With It?" "I Say a Little Prayer," "Color My World," "Shake Your Groove Thing," "Thank God I'm a Country Boy," "Venus," "Go West" and "Don't Leave Me This Way," among others. It's the kind of music you definitely would hear on the jukebox of some popular gay bar in New York, San Francisco and Boston or a huge Gay Pride celebration of sorts. Regardless, it all comes together nicely. It is playful. It is fun. It is frothy. It is intentional. And, it is inspired. 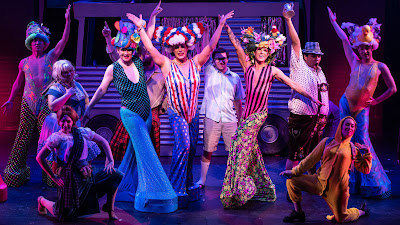 The wonderfully talented Emily Frangipane who choreographed many Downtown Cabaret Theatre productions including "Spring Awakening," "In the Heights" and "Phantom," is in her element here. Her choreographic indulgences are drenched in marvelously clever dashes of verve, camp, color, bawdiness, madness, fantasy, gayness and nostalgia. Everything she does works wonderfully within the context of the show and it's glorification of the drag queen persona. The dances themselves also remind one of something once performed at New York's chic supper club "The Blue Angel" a glittering showcase of musical entertainment on W. 44th St., that featured gay, straight and drag performers of the highest order who not only sang and danced nightly, but once the show was over, came to your table for a round of drinks and impromptu, pleasant conversation. 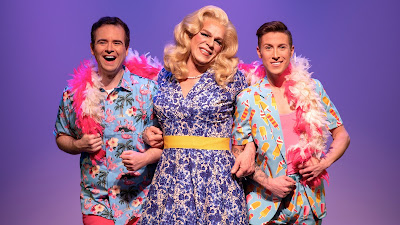 Lance Anthony, in the role of the transsexual Bernadette, looks like Lauren Bacall and Veronica Lake, all rolled up into one. It's a beautiful, detailed performance, both musically and comically, fraught with just the right amount of wit, charm and passion. Tim Rinaldi, as Adam/Felicia, is a force to be reckoned with. He's decidedly over-the-top, when the script calls for him to behave so. And he flounces and flutters in true diva like fashion. As Tick/ Mitzi, Jason Parry executes all the right moves in the musical's sentimental scenes. And he has great fun camping it up alone or with Anthony and Rinaldi in the musical's many production drag numbers.

"Priscilla, Queen of the Desert" is a wickedly wild, rainbow-tinged jukebox musical about love, acceptance, glitter, camp, gayness and being true to yourself, now, always and forever. It touches your heart. It awakens your senses. It gets you up on your feet, clapping, dancing and singing. It also thrusts the drag queen herself into the limelight as an artist, a performer, a singer and lastly, a connoisseur of incredible, over-the-top costuming fashion of the highest order. In short, it sets out to do what it's supposed to do in grand Technicolor fashion. And, then some. 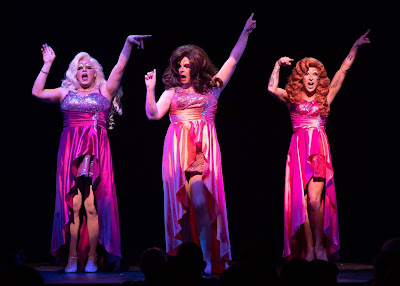