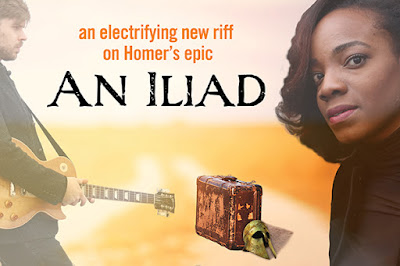 "An Iliad," based on Homer's poetic, mythological glimpse of the Trojan War's tenth year of battle, is pure, invigorating theater of the highest order. It's something you'd find at New York's Public Theater, the Donmar Warehouse in London's West End  or a small, inviting actor/studio space at New York University's prestigious Tisch School of Drama.

This is a bold, deeply satisfying work of death, destruction and survival that gives a majestic pulse to the everyday mortals and gods who popular Homer's "Iliad." It is also a perfect fit for Long Wharf's ongoing, distinguished commitment to real, raw, energetic theater, the kind that raises the bar on acting and provides tasty fodder for its thirsty, appreciative theater-oriented crowd anxious for something new and completely different.

Written by Dennis O'Hare and Lisa Peterson, this adaptation is an "Iliad" of sorts, that takes its cue from Homer's epic poem, its potent translation by Robert Fagles and one of many possibly different "Iliad" stories. It covers similar terrain (war is war, but in a minimalist context, that is ), but at times, it is distinctly modern or classic (contemporary language/ancient Greek verse), in spirit, tone, conversation and execution. No matter. It is an exquisite elegy on all levels that speaks directly to its audience while portraying the collateral damages of war in graphic detail, its unrelenting suffering and its unified fight for survival. 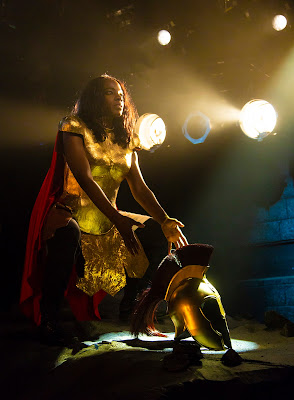 "An Iliad" is being staged by Whitney White, a fine, tremendously talented director whose credits include "What to Send Up When It Goes Down," "Jump," "This Land Was Made," Othello" and "Macbeth in Stride." Here, she crafts a vibrant, active and commanding work rife with inspiration, empathy, pulse and definitive immersion.

Telling the tale of "An Iliad" through the eyes of one main actor and much later, a supporting one, White relies on her cast of two to follow the recurring themes of a Greek tragedy by throwing themselves directly into the spotlight and basking in the ripe vocal deliveries and many character turns set forth by its creators. As "An Iliad' evolves, it elicits the push-pull mechanics and choices of the playwright's accessible language, which, as mentioned earlier, is both modern and traditionally Greek. It's a feat that requires steadfast precision and dedication from all parties and one that White accomplishes with immediacy, boldness and omniscient individuality.

That said, White still has her work cut out her her. Clocking in at an unbroken 1 hour and 32 minutes, "An Iliad' must evolve with the necessary tension, wit and fiery passion set forth by Homer's original work with absolutely no lull in the proceedings. It must also be allowed to move and breathe in ways that are gripping, dramatic and inspirational. One false move, jolt, hiccup or abrupt stop and you have a problem, a major one. 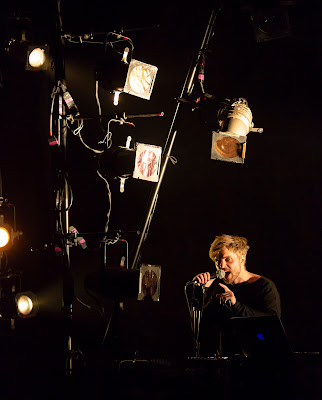 White, clever auteur that she is, never once lets that happen. Staging "An Iliad," she always knows what buttons to push, what to emphasize or downplay, when and how to shift gears in a  millisecond, how to move her actors freely about, when to prompt a light cue, a music cue, a sound cue or a blackout, how to connect and reconnect with the audience,  how to create that special, unbroken bond with every theatergoer and how to hold each and every one of them in the palm of her hands as the "Iliad" story moves forward toward its justifiable conclusion.

The beauty here, is seeing how it all comes together. Working from Denis O' Hare and Lisa Peterson's marvelously constructed play script, White brings a modernistic fidelity and zest to her storytelling techniques. This contemporaneity heightens the play's pivotal dramatic moments, its frequent flights of humor, its narrative luster and its potent mix of ill-fated warriors, battles, emotional tractions, secrets, disjunctions, convoluted intersections and near-purple melodrama. By turns deeply human, honest and provocative, White ignites the play's emotions, its urgency and its complexity with quivering, lofty results. And therein, lies the magic that is "An Iliad." 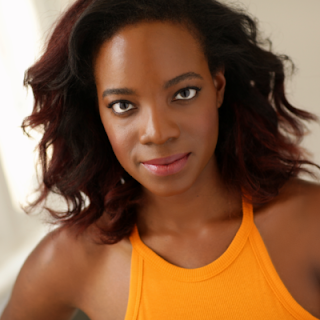 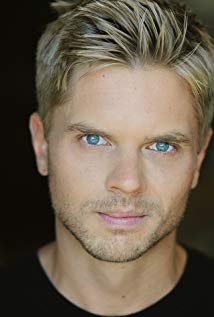 To bring "An Iliad" to life most effectively, an actor of tremendous skill, mindset and gravitas is requited. In Rachel Christopher, White has found the ideal actress to translate the carnage and ravages of war, the litany of battle witnessed through the different millenniums, the parallels, the distinctions, the participants, the differences, the enslavement and the vengeance. The actress must also portray, become and inhabit the bodies of several "Iliad" characters.
They are:
Agamemnon, the King of Mycenae and leader of the Achaean army.
Hector, the son of King Priam and Queen Hecuba and the mightiest warrior in the Trojan army.
Helen, the most beautiful woman in the world, stolen from her husband Menelaus and brought to Troy by the narcissistic Paris.
Priam, the King of Troy and father to fifty Trojan warriors including Paris and Hector.
Andromache, Hector's devoted and loving wife.who begs him to withdraw from the war.
Achilles, the headstrong champion of the Greek armies who commands the Myrmidons soldiers and moves them from his homeland in Phthia in Greece.
Petroclus, Achilles' beloved friend, advisor and companion.
Paris, the handsome, self-centered, spoiled son of Priam and Hecuba and brother of Hector.
Hermes, the messenger of the gods who takes Priam to his enemy's camp.

The artistry here, and one that allows Christopher to move from character to character in a single moment, is her tight, natural reign on the voices, the body language, the expressions, the reactions, the line delivery and the movements of the characters she is asked to portray. No two characters are alike and the majority of them spring to life without a single costume change. And that, of course, is the invigorating lifeline that is "An Iliad."

Christopher, center stage, mesmerizes throughout. As an actor, she is in full control. She gets the "Iliad." She understands the "Iliad." She knows how to perform it and perform it well. The  memorization itself, which shifts gears rapidly and continually with absolutely no warning whatsoever is conveyed with dazzling dynamism and individuality to warrant ten standing ovations. And the overall effect of Christopher's work is one you'll be talking about for weeks to come.

As the Poet's Muse, the handsome, golden-haired Zdenko Martin, on electric guitar, remains in the sidelines, so to speak, playing the show's evocative music precisely on cue and ever so passionately. Halfway through "An Iliad," he gets some dialogue of his own, which he delivers with the regulated intensity and passion indicated by the script and nurtured by White's steadfast direction. 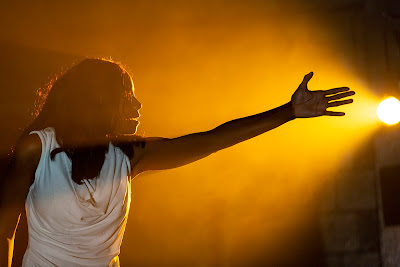 At Long Wharf, "An Iliad" sprawls across the floor of the Stage II Theatre with a modern relevance that does justice to Homer's ancient Greek epic poem about the final weeks of the Trojan War and the Greek siege of Troy after a monumental ten-year battle. Epic, ambitious and very handsomely staged, this production echoes the actor-audience inspiration found at New York and London-based drama schools and universities, the avant-garde complexity of the live performance and those wonderful moments where the lights go out and the theatergoer sits on the edge of his or her seat  riveted by the on-stage events witnessed in the darkness. It's a ritual of the whole that one savors and applauds in the moment - and long thereafter. 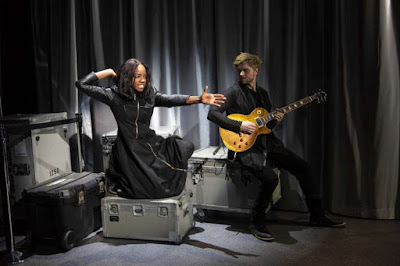