From the Desk of Jim R, Take 2, Column 155, A Review: "Girlfriend" (TheaterWorks/Hartford) 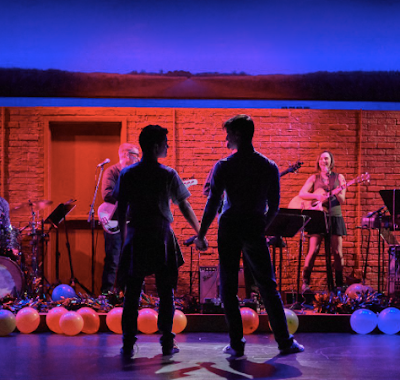 A music tape.
A boombox.
A phone call.
A car.
A drive in movie.
A glance.
A hug.
An embrace.
A kiss.
Another kiss.

Thus, begins the sweet and simple teen romance that blossoms into something more serious in Todd Almond's "Girlfriend,"  an angst-ridden, emotional portrait of young gay love that takes its cue from Matthew Sweet's popular album of the same name.

In the musical, Will, a young gay man in a small Nebraska town has an impossible crush on Mike, a wildly attractive, college-bound athlete who plays baseball, has a girlfriend and is struggling with his own sexuality. Mike, it seems, has also grown tired of being the ever-popular jock and high school hero he's forced to play-act in order for him to fit in. So he turns to Will. And so, the attraction begins.

"My life has finally become the musical I always suspected it was," Will tells us. 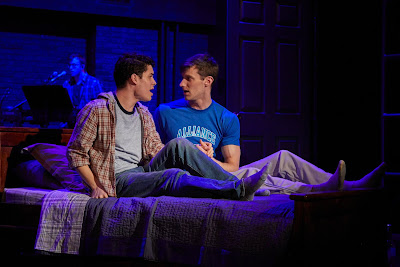 Like "Fun Home,"  "Girlfriend's" workmanship is twofold. It is a story about coming out. It is also a coming-of-age story about sexual awakening, following your heart and not being ashamed of your individual beliefs, lifestyle and wistful longings for same-sex relationships.

Does Mike really love Will?
That is the musical's big question.

"Girlfriend" is being staged by Rob Ruggiero whose TheaterWorks directorial credits include "Next to Normal," "Molly Sweeney," "Take Me Out," "The Goat," "The Understudy," "The Mountaintop," "The Laramie Project," "Constellations" and "The Legend of Georgia McBride." Here, Ruggiero crafts a wonderfully sculptured and nuanced production that is rich, witty and heartfelt. He also brings the right honesty and understanding to the project, which, in turn, allows the material to grow, delight and entice plus maintain its strong sense of individuality, balance and animation.

From a musical perspective, the story of "Girlfriend" is a simple set up - two teenaged boys discover and embrace gay love. Nonetheless, Ruggiero's vision, is one freighted with complications, complexities and uncertainties. And one that never once loses sight of its origins, its rippling undercurrents and its ever-changing landscape. And therein, lies its allure, its fascination and its heartbeat. 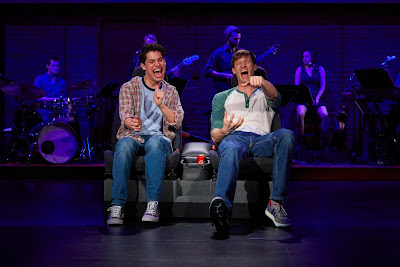 As storyteller and director, Ruggiero doesn't waste a single moment. This being a two-character musical, pacing - the right pacing - is everything in order for the story and its characters to click and resonate with its audience. One false move, one mistimed moment or one abrupt halt in the action and  "Girlfriend" could stop dead in its tracks. Naturally, that doesn't happen here. There's lots going on from scene to scene and song to song and Ruggiero has a tight reign on things from how a scene is to be played, how a song is blocked and staged and how the two central characters relate to one another from their first meeting, their first date, their first kiss and their first night together in the bedroom making love. No matter what one's sexual orientation, Ruggiero's open-hearted treatment of the material makes this tale of young love so sweet and so personal, you can't help but conjure up fond memories of your first romantic encounter and its eventual outcome.

Written in 1991 by Matthew Sweet (musical and lyrics) as an alternative pop-rock album, "Girlfriend's" blueprint for love, conflict and romantic interplay anxiously exposed the heartbreak, optimism, confusion and excitement of new romance. With its guitar-heavy emotions, sweetness and  edgy vocal hooks, Sweet's 15-song compilation bristled with the right pulse, imagination and in-your-face emergence. Its clever, lyrical mix of grunge, pop and sarcasm not only came from the heart, but provided solace for the broken-hearted  men and women who identified with Sweet's angst-ridden glimpse of mainstream love, its positive vibes, its pickup lines its sentiment and its bittersweet realities. 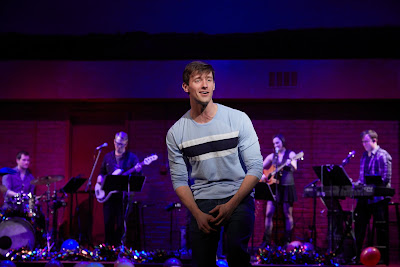 Reimagined for the stage version by playwright Todd Almond, the songs themselves - ten in all - fit nicely into the framework of his bittersweet love story, its progression and the discovery of one's own sexual identity. They are: "I've Been Waiting," "Reaching Out," "Winona," "Looking at the Sun," "Girlfriend," "We're the Same," "Evangeline," "Your Sweet Voice," "You Don't Love Me," "I Wanted to Tell You." Others, however, did not make the cut including "Your Sweet Voice," "Does She Talk?" and "Don't Go."

At TheaterWorks, musical direction for "Girlfriend" is provided by Evan Zavada ( conductor, keys, vocals), backed by the orchestral team of Billy Bivona (guitar 1), Julia Packer (guitar 2, vocals), Adam Clark (bass, vocals) and Elliott Wallace (drums). Placed strategically upstage throughout the entire production, this talented group of five jam most engagingly like a band performing in someone's basement or at a dimly lit bar off a much-traveled highway in small town Americana. It's a great touch and one that works quite well in this particular production.

The music itself - direct, spirited and incredibly universal - resonates with a beating heart and comfort that Zavada fully comprehends, understands and releases with sensibility, strongness and passion. That said, there is also a  sense of humor in the songs which Zavada and company unleash most engagingly along with Sweet's intentional angst, bite, sarcasm, cheerfulness and romantic obsession. Here, nothing gets lost in the translation. Nothing is pumped up or thrown in. Nothing is out of place or repetitive. Instead, the music of "Girlfriend" unfolds naturally and unobtrusively. Musically, Zavada knows exactly what he wants, how to shape and mold things, when to pause and take a breath, how to get his cast of two pumped up and excited over the material at hand and how to heighten certain vocals with brilliantly timed harmonizing from both his two, charismatic leading men and select members of his exceptional orchestral team. 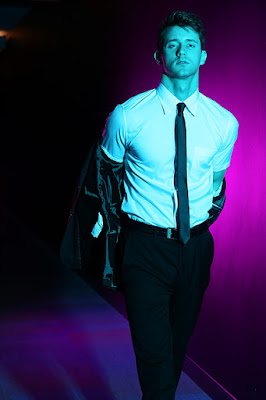 The two-act musical stars CJ Pawlikowski as Mike and David Merino as Will.
As befitting a work of this nature, both actors are fluent in the musical nature of the piece, its message, its characters, its story and its embracement of the gay lifestyle. Taking their cue from the gay characters in "Fun Home," they too play it as it is, simply reveling in the moment, enjoying their exploration of self-discovery and never once pushing for effect. What matters here are the hearts and minds of the characters, their beliefs and how things come together before the final fadeout. It's as simple as that. The duo also share an on-stage chemistry and vibe that's very natural and very, very believable.

Pawlikowski's portrayal of Mike is sharp, focused, sensitive and energetic. He's a handsome prince of sorts. But underneath, we feel his pain and insecurity as he struggles with feelings he doesn't quite understand until he befriends Will and eventually ends up becoming his boyfriend and lover. Vocally, he's a powerhouse of sorts with a rich, clear voice that embraces Sweet's strong and tenderhearted vocals, its lyrical message and its celebration of all things romantic. There's also a simmering sexiness to his song craft offset by a melodic, note-perfect delivery of warmth, good cheer and a one-on-one vocal showmanship between actor and audience. 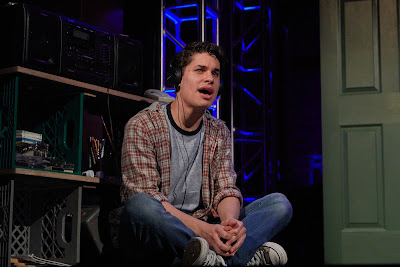 Last seen as Angel in the national touring edition of  Jonathan Larson's "Rent," Merino richly inhabits the character of Will, the young, openly gay high school senior who pretty much rockets to the moon once he romantically connects with the ever-dreamy Mike. Here, as in "Rent," the actor takes hold of a character, makes it his own and runs with it every step of the way. His attraction to Mike is naturally conveyed and believably executed as their relationship is played out, both musically and dramatically.
Vocally, he too is blessed with strong melodic skills that allow him to engagingly connect to Sweet's music, his songs and their intended meaning.

"Girlfriend" is a vibrant, intimate, sweet-natured musical portrait of two gay men who find love following high school graduation. Under Rob Ruggiero's solid, endearing direction, it comes alive with the right passion and conviction that feels utterly real and revelatory.  Matthew Sweet's pop-tinged musical score serves the material well with its playful, lyrical weight of love and loss. The performances are nicely telegraphed by the tremendously talented duo of CJ  Pawlikowski and David Merino. And the love story that plays out over the course of 85 minutes is touching, well told and timely. So much so, it's impossible not to be moved.
Love is love - gay, straight, whatever. And "Girlfriend" celebrates that feeling with unhinged, heartwarming romanticism. 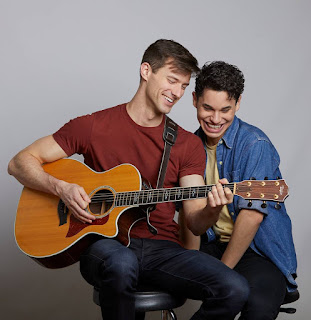 "Girlfriend" is being staged at TheaterWorks at the Wadsworth  (600 Main St., Hartford, CT), now through April 28.
For tickets for more information, call (860) 527-7838
website: theaterworkshartford.org.

Note: "Girlfriend" is the first of three productions to be staged at the Wadsworth  Antheneum while the Pearl Street location of TheaterWorks is being renovated)

Posted by JimRuocco at 7:36 PM