From the Desk of Jim R, Take 2, Column 269, A Review: "Tenderly: The Rosemary Clooney Musical" (Music Theatre of Connecticut) 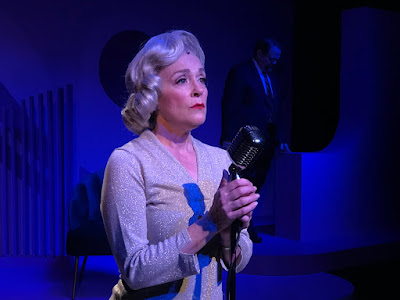 There are lots of reasons why Music Theatre of Connecticut's "Tenderly: The Rosemary Clooney Musical" astonishes, cajoles and delights.

It feels fresh, timely and important.
Its mix of song classics from yesteryear is absolutely sublime.
It's the perfect tonic to escape these very troubled, uncertain times.
It comes gift wrapped with a nostalgic glimmer that is hard to resist.
It contains a story that is primed and ready to pull at your heartstrings.
And lastly, there is the magnificent, expressive performance of Susan Haefner as the troubled, broken songstress.

The production, directed by Kevin Connors, jump starts the venue's 2021-2022 season, an ambitious, eclectic mix up of hand-picked plays and musicals that include "Falsettoland," "Who's Holiday!," "The Mountaintop" and "Buddy - The Buddy Holly Story."

Intimate.
Enjoyable.
Dynamic.
Compassionate.
Misty-Eyed.
You can't help but succumb to its many pleasures. 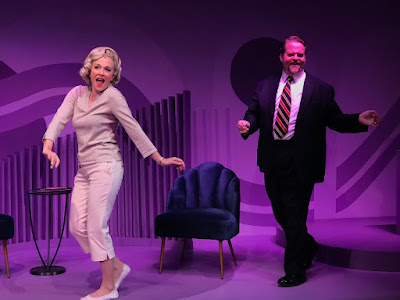 Written by Janet Yates Vogt and Mark Friedman, "Tenderly: The Rosemary Clooney Musical," retraces the singer's life through therapy sessions (she has been self-admitted to a rehab facility) that take place in 1968 following her well-publicized nervous breakdown. Told  through flashbacks, the production pinpoints pivotal moments from both Clooney's personal and professional life including her marriage to actor Jose Ferrer, her troubled childhood, her depression, her drug addiction, her insecurity, her friendship with Bobby and Ethel Kennedy, her film career ("White Christmas," "Here Comes the Groom"), her early radio days at WLW alongside singer/sister Betty, her rise and fall in the entertainment industry, her fight to survive financially and her many comebacks.

The playscript for this production is both genuine and clever as it looks back at Clooney's life, focusing on important, reflective moments that collectively capture the angst, sentiment, emotion and truthfulness of the singer without ever becoming overly preachy, disruptive or out of sync with the progression of the candid storytelling. This, being a musical entertainment, the songs themselves are formatted seamlessly throughout the two-act presentation and work magnificently in capturing Clooney's thoughts and feelings from scene to scene and act to act. More importantly, nothing happens by accident. It's all beautifully modulated, controlled and timed. 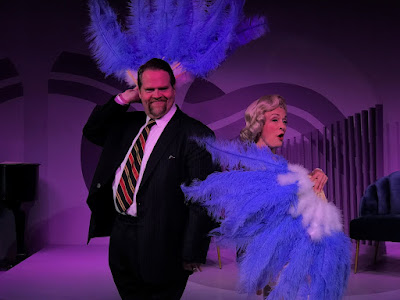 Staging "Tenderly: The Rosemary Clooney Musical," director Kevin Connors is a versatile showman whose insightful, meaningful approach to musical theatre gives this presentation an importance and timeliness, played out against Lindsay Fuori's moody, atmospheric set design (RJ Romeo's lighting palate is also very effective) with crispness, nuance, grace and vitality. From start to finish, this is a beautifully realized interpretation that replays the lived experience of Clooney and how she wrestled with both success and adversity.

As the story evolves, the songs, the short scenes, the multiple locations and the time-tripping are efficiently staged by Connors who makes great use of Fuori's scenic surroundings, framing the action creatively throughout and tying it emotionally to the era that was Clooney's lifeline. In terms of pacing, reaction and involvement, he gets it right every time allowing the material -  both song and dialogue - to work its magic, toy with your senses, surprise, entice and shock you and bask in the play's stirring, nostalgic whimsy. Here, as in other MTC productions including "Cabaret," "Ragtime," "Cat on a Hot Tin Roof" and "Jekyll & Hyde," Connors knows how to let a production breathe, pause, move and connect in ways that are both special and are not easily forgotten. And that's exactly what puts him at the top of his game. 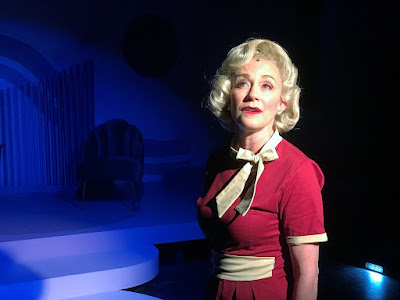 The musical playbook for "Tenderly: The Rosemary Clooney Musical" includes 21 songs from the singer's musical repertoire. They are: "Hey, There," "Come On-A My House," "Sisters," "Count Your Blessings," "Hawaiian War Chant," "It's Only a Paper Moon," "How About You?," "Tenderly," "Straighten Up and Fly Right," "Botch-A-Me," "Are You In Love Again?" "I Get Along Without You Very Well," "Have I Stayed Too Long at the Fair," "Pretty Little Pills," "Tenderly (Reprise)," "I Remember You," "Sway," "Hey There (Reprise)," "Come On-A My House/The Breakdown," "Mambo Italiano" and "This Ole House." It's a celebration of all things Clooney that portrays her rise to fame, her ups and downs, her remarkable talent, her jazz/pop/sentimental sound and lastly, those well-played vintage classics.

Overseeing the musical style and sentiment of the actual story, musical director David Wolfson is the perfect choice to bring Rosemary Clooney's popular song repertoire to the stage. His deft and creative reign of the music moves freely from sweet and dreamy to nostalgic and energetic with the bravura of concert and radio show intimacy. All of this is smartly captured by the maestro (he conducts and plays the piano) and his small but driven orchestra (Steve Taylor/Rich Zurkowsky (bass), Steve Musitano (drums), all of whom bring a melodious quality to the proceedings in terms of exposition, presentation and pacing. The venue's intimate, one-on-one connection with the band, the performers and the in-house audience heightens this feeling, often stirring up fond memories of the supper clubs and showcases of yesteryear. 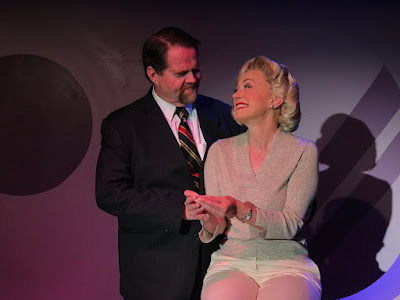 Playing the late, great Rosemary Clooney, the mesmeric Susan Haefner is both poignant and powerful in her portrayal of the singer's personal struggles, demons, breakdowns and continual fight for survival. It's the performance of the season and one that the actress embraces with the style, personality, magic and cheeriness that once was Clooney.  As the story unfolds, there is real honesty, verve and spunk to her portrayal - natural, intuitive, gifted and personal. It's also a character turn that comes from the heart without any form of hesitation or calculation. Haefner is so tremendously gifted, you never doubt for a moment that she is Rosemary Clooney.

Vocally, she recreates the singer's musical repertoire - "Hey, There," "Come On-A My House," "Mambo Italiano," "This Ole House," among others - with form, seasoning, confidence, emotion and kick. It's a connection like no other, but without any form of copycatting. Here, she puts her own personal spin on the vocals, making every one of Clooney's songs stand out individually with shading, style and personality reflective of the late singer herself, but, at the same time, very much her own.  No matter what she sings, her voice comes shining through with great dimension, feeling and individuality.

As the Doctor, the psychiatrist who attempts to understand and access Clooney's mental breakdown, John Treacy Egan offers a Freudian-like interpretation fraught with genuine empathy, forcefulness, drive and sensitivity. It's a weighty, important part that the actor invests with considerable range and emotion alongside Haefner.

He too, is asked to play multiple roles, both dramatically and musically, all of which he tosses off effortlessly, flanked by the actress, the on-stage band and the cozy performance space. Perfectly cast opposite Haefner, Egan and his co-star share a remarkable, innate chemistry and showmanship, which in a musical of this size, goes a very long way. 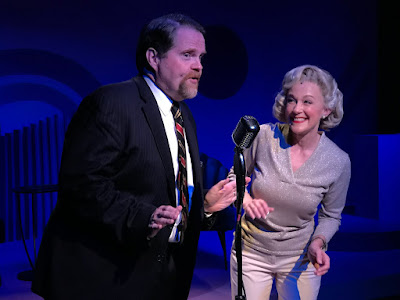 A fascinating, complex musical portrait of a woman whose success often toyed with her emotions, "Tenderly: The Rosemary Clooney Musical" creates the right sense of wonderment and pain with riveting, blunt emotion. Susan Haefner crafts a feverish, blazing performance under Kevin Connors' winning, intimate direction as does the equally charismatic John Treacy Egan.

Musically, it's all here - staged, performed and sung - with thrilling remembrance and shimmering musicality. The show itself is a privilege to behold and one that is fresh, truthful and so much fun. So much so, you'll more than likely want to see it again or break out your favorite recordings of Clooney's work for an at-home concert of one hit after another including "Come On-A My House," "Hey There" and "Mambo Italiano." 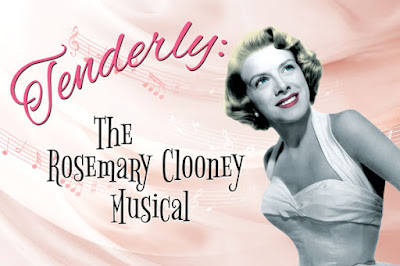