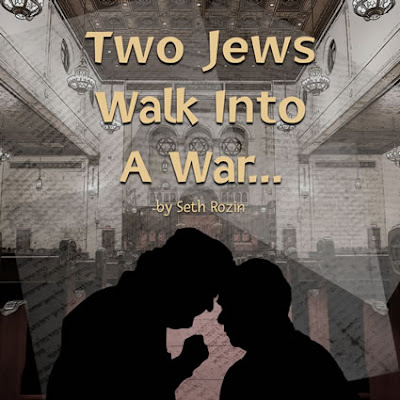 In Seth Rozin's timely two-character play "Two Jews Walk Into a War," the religiously observant Ishaq and the more secular Zeblyan are the last two Jews left in a bombed-out synagogue in Kabul, Afghanistan.
Both men - highly opinioned in their beliefs, ideals and traditions - share a dislike for one another despite the fact that they've been thrown together in shared isolation amidst chaos, war, uncertainty, disappointments, resentments and religious harassment.
As the play opens, both men have different ideas for the future of Jews in Afghanistan. One wants to build a brand new temple designed to attract Jews from all over the world. The other brags about becoming a father by bedding a converted woman who will anxiously bear his children.
But first, there is the question of the Torah  - a scroll containing the laws of God as revealed to Moses  and recorded in the first five books of the Hebrew scriptures - and the plan to dictate it from memory on soiled parchment from an outside garbage bin.
Discussing passages like Talmudic scholars, the two men engage in daily arguments about God (named Hashem, Yahweh or Tetragrammaton in the Hebrew Bible), the Torah's sacred passages, Judaism, rabbis, commandments, masterbation, lesbian women and homosexuality. 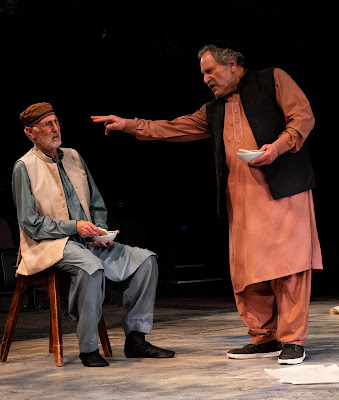 At Playhouse on Park, Rozin's work kicks off the theater's exciting 2021-2022 season that includes "Miss Bennet: Christmas at Pemberley," "Five Guys Names Moe," "Divas: Double or Nothing," "The Agitators" and "Pippin."

It is a curious bit of theatre, offset by expressive dialogue, acerbic one-liners and glib, satisfying shtick. Played out through 16 short scenes, "Two Jews Walk Into a War," takes its cue from "Grumpy Old Men," "The Odd Couple" and "Waiting for Godot,." among others. It is funny. It is serious. It is thought-provoking. It is surprising. It is heartfelt. It is edgy. It is dramatic. And the last five minutes are guaranteed to get under your skin and more than likely reduce you to tears.

As playwright, Rozin is an adept storyteller. Everything that happens is carefully constructed and modulated within reason. Like "Waiting for Godot," you have to listen to every single word, line of dialogue and character exchange. It also helps if you are familiar with Judaism, Middle Eastern culture, the Taliban and all those widespread media reports detailing the exodus of Jews from Kabul. If you are not, some of what happens in this 85-minute presentation might confuse you, cause you to lose interest or knock you completely off track. Therefore, suggested research is a must to fully appreciate Rozin's writing, his characterizations and detailed descriptions of the play's main and secondary events. 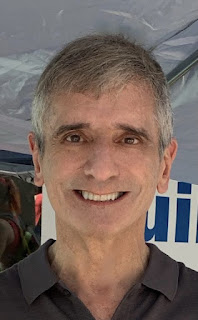 Staging "Two Jews Walk Into a War," director David Hammond (Artistic Director/Emeritus of PlayMakers Repertory Company) entertains his audience with scenes and important moments that are fast, well-orchestrated and smartly paced. He navigates Ishaq and Zeblyan's story with proper calibration, thus, eliciting the right response for the onstage characters and those theatregoers seated in the audience on all three sides of the Playhouse on Park venue. Given the serious and comedic nature of the piece, at times, the dialogue can be heavy with anchored sadness and information aplenty but Hammond never lets his production stop dead in its tracks. Instead, he dives in with ideas and staging that are both involved and emotional.

Hammond is at his directorial peak during the last five minutes of the play. Here, Rozin brings a twisty, unexpected conclusion to the piece that Hammond invests with sensitivity, beauty and truthfulness. It's one of those stirring moments that should (and will) move you to the edge of your seat fighting back tears as the houselights fade to black and the production is finally over. 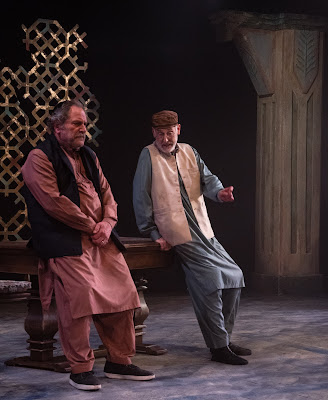 In the roles of Ishaq and Zeblyan, Mitch Greenberg ("A Shayna Maidel," "The Diary of Anne Frank") and Bob Ari ("Frost/Nixon," "Art") deliver two moving, personal, authoritative performances that keep the action grounded and truthful. As actors, they are absolutely perfect for their respective roles and share a charismatic camaraderie with each other and the Playhouse audience. From scene to scene, they play off one another with the dash and chutzpah of two vaudevillians, but never go overboard to get a laugh, a tear or a shake of one's head.

Always at odds, they revel in the play's language, its emotional shifts, its adroitly managed Judaism, its apparent fact-ness and newsworthy canvas. It's a job well done - and then some.