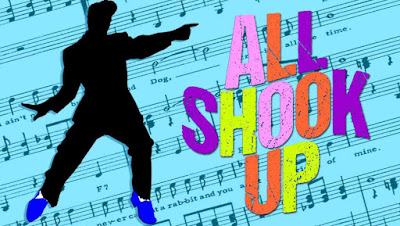 "All Shook Up,"  the Elvis Presley inspired musical about small-town Americana during the Eisenhower era, takes it cue from several Broadway musicals including "Footloose," "Grease," "Bye, Bye, Birdie," "Good Vibrations" and "Mamma Mia,!" among others.

But that's not necessarily a bad thing. If anything, it sets the stage for a night of non-stop entertainment where bright and bouncy is the bill of fare, offset by distinctively shaped familiar musical songbooks, sit-com laughter, period dances, family-friendly parodies, shakeups, outbursts and surprises and a cast list of characters common to old-fashioned movies and TV shows from the 1950's.

What separates this production from others this summer is that "All Shook Up" has been solely designed to showcase members of the Sharon Playhouse 2018 "Teen Camp," who, prior, to opening night, were given a two-week rehearsal process to master the mechanics and craftsmanship of a full-fledged Broadway musical, culminating in ten performances at the acclaimed summer theater. 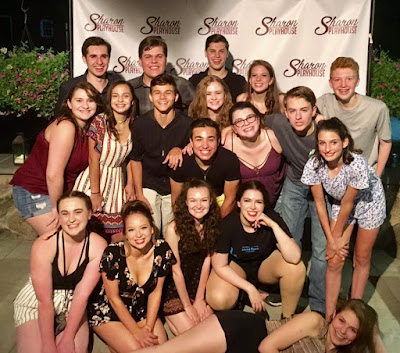 What especially gratifying about this particular "Teen Camp" is that every single one of these teenagers is absolutely serious about musical theater performance and their individual role or roles in the actual production. They are talented. They are personable. They are charismatic. They are energetic. And they when they come together as one, they are spontaneous, thrilling and spectacular.
Sharon Playhouse is to be commended for creating this summer program and encouraging young people to follow their dream.

The plotline for "All Shook Up," borrows some of the tasty ingredients from William Shakespeare's "Twelfth Night " for its playful conceit. That includes mismatched lovers, lusty and forbidden romances, comic buffoonery, sidekicks delivering love letters, and lastly, a woman disguising herself as a man to win the heart of the man she loves.

To bring "All Shook Up" to life, director Sarah Combs has cast the entire production well, using the only the very best performers (ages 13 to 19) to play the leads, supporting roles and the singers and dancers of the ensemble. She has also surrounded herself with a tremendously talented technical team, which includes Thomas P. Swetz (set design), Zach Straeffer (lighting design), David Baxter (costume design), Jeremy Oleska (sound design) and Karla Woodworth (props design).

As director, she gives tremendous voice and humanization to the story, the characters, the sub plots, the outcomes and the show's dizzying musical theatricality. She has researched the 1950's time period well from top to bottom to front and center. Everything that happens on the Sharon Playhouse stage has been carefully timed and positioned. The entire cast acts and behaves as if they were uprooted from the 1950's and dropped down into Sharon, CT. via Dr. Who's Tardis. The show's silly, corny and playful dialogue is played straight, chock full of nuance and believability. Every single one of the scene changes is fast and fluid and expertly handled by the production's incredible backstage running crew. And no one makes a mistake or misstep under Combs' deft, creative tutelage.

First and foremost, Combs has got a story to tell and she tells it well. The show itself  has been designed exclusively as feel-good entertainment and that's exactly what you get. There is no Elvis to speak of, but the musical plays like something you'd find in one of his movies, only its live and played out in glorious Technicolor.
It dances. It sings. It cajoles. It stings. It bites. It produces huge belly laughs. It make you smile. It make you stand up and cheer. It gets you hot and bothered. And given the talent Combs has assembled, its amazes and amazes and amazes.. 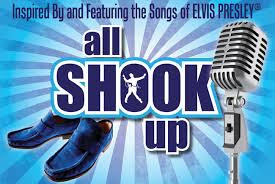 Musically, "All Shook Up" takes it cue from other jukebox musicals where the songs and not the plotline are the main attraction. That said, its creators have included more than 25 Elvis Presley classics that fuel the musical's energetic, snappy and pumped-up nostalgic musical songbook. The good news is that each and every song fits seamlessly into the night's entertainment from solos and duets to big, high octane, showstopping  production numbers. Nothing is pre-packaged, drippy or gooey. This is 100 per cent Elvis just the way you like it. And it's all been designed solely to knock your socks off, work you into a frenzied state of breezy delirium and get you clapping and clapping until your hands hurt.

At Sharon Playhouse, "All Shook Up"  springs to life under the musical direction of Jacob Carll (conductor/keyboard), Rich Conley (reeds), Joe Deveau (guitar), Mike Siless (trumpet), Steve Kessler (trombone/keyboard 2), Ben Basile (bass) and Tim Hermann (percussion). Carll, a talented musician with credits ranging from "Footloose" and "Avenue Q" to "9 to 5" and "Urinetown," works his magic here and brings a unique freshness, snap and pulse to each and every one of the musical numbers. Yes, this is the music of Elvis Presley. Yes, there's a certain homage and nostalgia to the "All Shook up" musical songbook. But at the same time, there's so much more going on here. 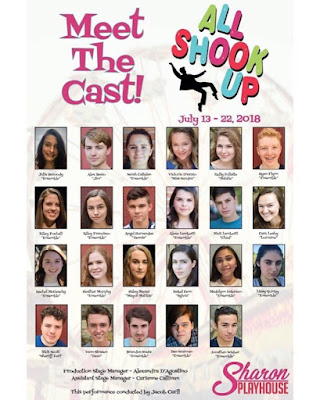 What makes "All Shook Up" snap, crackle and pop is the way Carll and his orchestral team wrap themselves around the music to make it sing. Everything has its time and place in the actual story, but the songs themselves have been pumped up and re-imagined for a modern day audience without losing any of their tangy, pungent 1950's flavor, dimension, melancholy, sweetness and social commentary.  That concept not only breathes new life into the familiar Elvis soundtrack, but lets you experience the music on an entirely different level, which is exactly the point. No boring, tired retreads here
.
This production shines like a brand new 1958 Cadillac going that extra mile and living the dream along that fast and slick musical highway. And the "All Shook Up" cast (leads, supporting players, ensemble) demonstrate great showmanship throughout, tackling every single song. beat and harmony as if it was written especially for them. They are AMAZING. And finally, in the big production numbers, the rich choral sound that fills the Sharon Playhouse stage is ovation worthy at every musical turn.

The dancing in "All Shook Up" is amazing, energetic and thrilling. Choreographer Grace Mihalchik dishes up dance moves, styles, beats and rhythms that vividly and superbly reflect the 1950s period from whence they came. Creatively, Mihalchik connects with the material, its songbook, the characters and the many, many dance numbers that propel the action forward. No two numbers are alike.

Here, you get individual numbers that are brilliantly choreographed using extremely complicated and very stylized 1950's dance moves dance that cry Equity and not Teen Summer Camp. Mihalchik is too professional to go the paint-by-numbers route. Instead, she crafts a thrilling musical dance entertainment where every single cast member on stage has his or her individual moment, recreating dance moves designed for Broadway heavyweights. How very lucky the "All Shook Up" cast is to have someone of Ms. Mihalchik's caliber in their corner. And how lucky are we to sit in the audience and watch this woman set the Sharon Playhouse stage ablaze with such energy, talent and electricity. 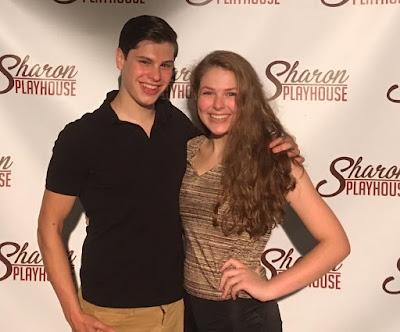 In the lead role of Chad, the guitar-playing roustabout who rides into town and causes the entire female population to drool, swoon or faint at the sight of him, Nick Lamberti has the kind of dreamy good looks, swagger, smile and persona, necessary to pull the part of Chad off believably and ignite the necessary sparks, passion, tension and intrigue. He's a major talent and a force to be reckoned with from the moment he appears on stage. He's an exceptional singer, dancer and showman. He's got the Elvis moves down perfectly. His character's unbridled narcissism is believably conveyed. He loves being on stage in front of an audience. And even though the show is rehearsed, he has a natural charm and confidence about him that makes one believe everything is happening in real time.

Kelly Follette, as Natalie Haller, the tomboyish mechanic who disguises herself as Ed in order to pursue the man she loves, is charming, personable, intelligent and charismatic. She has great fun bringing both characters to life. And she does it ever so perfectly. Vocally, she is powerful and commanding. And she is perfectly matched opposite her brooding, handsome co-star. 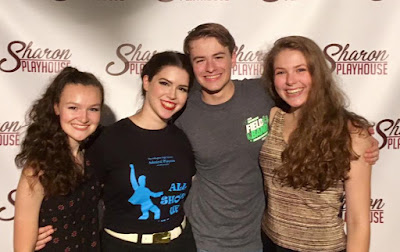 Angel Hernandez hits all the right marks with his energetic, comic portrayal of the nerdy and geeky Dennis. As Sylvia, the local bar owner, Isabel Penn is "spot on." She also has a wonderful singing voice, which is used to full effect in "There's Always Me."  Alex Besio, who plays her love interest Jim Haller brings plenty of charm and charisma to the part of a troubled man who has lost his wife and is anxious to start over.

Other standout performances come from Cara Leahy as Lorraine, Haley Napier as Mayor Matilda Hyde, Vann Strassen as Dean Hyde, Victoria D' Orazio as Miss Sandra and Nick Scott as Sheriff Earl. All five are appropriately cast for their respective roles, which they bring to life most engagingly.
Their singing, their facial expressions, their body language, their line delivery and their interaction with the rest of the cast is believably rendered.

The "All Shook Up" ensemble is headed by Lizzy Quinby, Ryan Flynn, Julia Baroody, Brandon Swetz, Sarah Cattelan, Kiley Foxhall, Riley Francisco, Madelynn Peterson, Alexa Lamberti, Rachel McGeachy, Heather Murphy and Dan Warman.  Their involvement in the production is fueled by exceptional singing, dancing and acting skills. Just look at their faces. They are having the time of their lives and it shows every time they are on stage doing what they love best.

"All Shook Up" is the musical hit of the summer. It is lively and inspired. It is fast-paced and light-hearted. It is bright and bouncy. It is sexy and charming. It contains one hit song after another. The performances are incredible. And the rapturous applause and standing ovations that greet every performance are well deserved. So go and enjoy. You won't be disappointed. And who knows? In the years ahead, you might see some of the "All Shook Up" cast members on Broadway. It's been know to happen. And, it has. 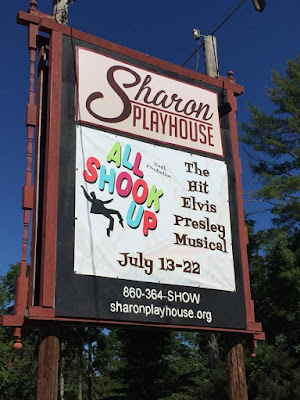 Posted by JimRuocco at 4:57 PM