From the Desk of Jim R, Take 2, Column 85, A Review: "Hand to God" (TheaterWorks/Hartford) 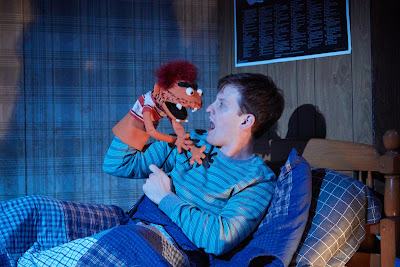 In "Hand to God," an unhappy teenager named Jason suddenly finds that the puppet named Tyrone he has created not only has a mind of its own, but has taken full possession of both his left hand and his unsuspecting mind.

"You want the devil," Tyrone shouts. "I'll give you the devil."

And that's just the beginning.

Mind you, all of this is meant to be funny. And it is. It really is. 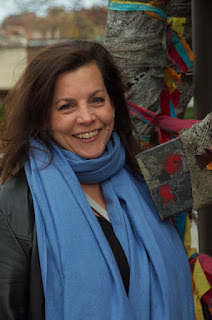 Under Tracy Brigden's spirited direction, "Hand to God" is fast, furious and frenetic with well-paced laughs coming in all directions. The strength of the piece is, of course, its antic energy, which Brigden uses to full advantage. Creatively, she knows how to frame a joke, how to position it, how to make it fly and how to make it fit unobtrusively into the core of the non-stop action. The material itself contains gobs and gobs of hysterically funny stuff, funny lines, funny sets up and funny stage business. The trick, therein, is to make it all seem quite natural while going for the punchline and the laughter without any sort of calculation. Brigden pulls this off swimmingly.

"Hand to God" hits the mark on all accounts. Each line of dialogue is spoken with the mindset and wisdom of someone skilled and schooled in palpable madness, cheeky innuendo and farcical torment and in-your-face absurdities. It's all marvelously accentuated and delivered scene by scene, act by act with plenty of surprises, jolts and unexpected chaos thrown in for extra measure. You laugh out loud, you shake your head in wonderment and you slap your knee as the proceedings get crazier and crazier, which is exactly the point of this wildly wicked piece of theater. 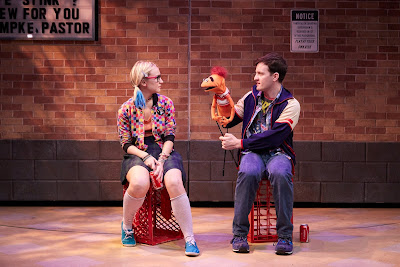 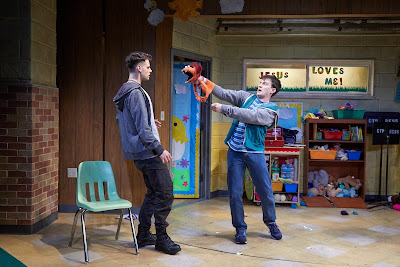 "Hand to God" is littered with terrific comic performances well suited for the material at hand. All five actors bring appropriate squeals of excitement, absurdity and cockiness to the piece, matched by precision-drilled physical comedy technique reminiscent of both "Noises Off" and "The Play That Goes Wrong." 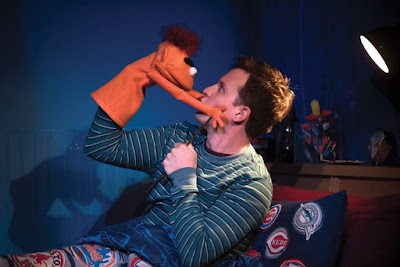 In order for the role of Jason and Tyrone to work, you need someone with amazingly accurate comic timing to pull off the difficult feat of playing two different characters (in this case, man and puppet), who can shift gears and roles at any given moment without any form of hesitation. In Nick LaMedica, Brigden has found the ideal young actor to step front and center as both the naive Jason and Tyrone, the possessed puppet prone to obscenities, threats, insults and sexual manipulation. It's a dual acting role that demands 100 per cent accuracy, timing and puppetry showmanship in order for you to believe that each character is completely separate from the other. LaMedica never lets his guard down for a moment and delivers the comic performance of the season. He is incredible. 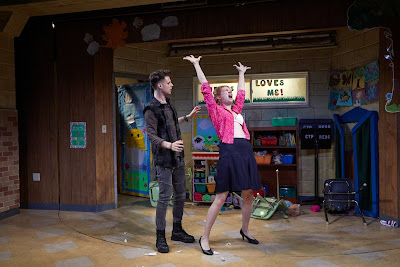 Lisa Velten Smith is howlingly funny as Margery, Jason's widowed, oversexed, often misunderstood mother who teaches puppetry and longs for sexual fulfillment and acceptance as a Bible-practicing Christian. This is a vivid, colorful performance, chock full of surprise and craziness at any given turn. As Timmy, the hot, sexy young teenager and bad-boy rival of Jason, Miles G. Jackson oozes enough charm and James Dean-like rebellion to not only seduce and penetrate a very willing Margery for some down-and-dirty onstage sex but get several women and homosexual men in the audience very hot and bothered. It's a feat he pulls off magnificently. 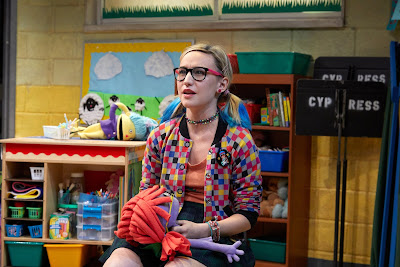 As Jessica/Jolene, Maggie Carr manages to be both nerdy and sexy as Jason's bewildered love interest. She is funny. She is crazy. She also knows how to deliver a joke or punchline in true stand-up fashion. Peter Benson, as Pastor Greg, superbly projects the image of a Southern milquetoast pastor willing to do anything for the Lord himself and his thoroughly mixed-up and confused congregation. He's so in sync with the part, you'd swear he actually was uprooted from a Lutheran Church in Texas.

"Hand to God" is a daring, robust, wicked, sexy comedy anchored by a rare, emotional comic energy that is truly inspired. The laughs keep coming and coming. The non-stop mayhem of the script is hilariously orchestrated by director Tracy Brigden. And the cast have as much fun bringing this story to life as we do watching them. Who knew a blasphemous puppet who takes possession of a teenager's left hand could be so funny? In short, what's not to like? 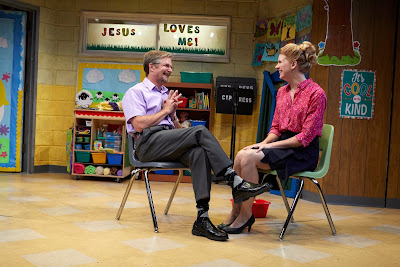