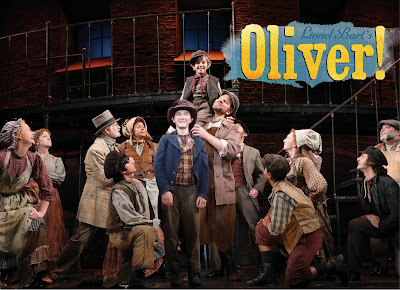 There is nothing frothy, giddy, clownish, gooey or squeaky-clean about Goodspeed's thrilling production of Lionel Bart's "Oliver!"
It's still the same musical that first saw light in 1960 at London's West End and subsequently, three years later, on Broadway.
But this "Oliver!" is unlike any other "Oliver!" that's been revived or produced over the last decade or two.

It is menacing.
It is dark.
It is earthy.
It is wild.
It is saucy.
It is daring.
It is unsettling.
It is disturbing.
It is clever.
It is real.
It is amusing.

Director Rob Ruggiero isn't interested in sugarcoating the story or delivering a musical with a decidedly very happy ending. Instead, he goes back to the original source material for inspiration: "Oliver Twist" by Charles Dickens. That conceit, in turn, not only allows Ruggiero to breathe new life into this 58-year-old musical, but shape and mold it against the dark and grim backdrop of Dickensian London that Dickens himself created.

Nothing is downplayed or misinterpreted.
Here, you get living, breathing, real people living in impoverished 19th century London, a place populated by thieves, pickpockets, prostitutes, murderers, scavengers, drunks and kidnappers. Life is cruel. Life is unkind. Life is unfair. Life is disappointing. Life is inhuman.

The challenge, of course, is to flesh out this thematic gloom and doom and make it sing, make it soar, make it fly and make it dance. And that is exactly what this "Oliver!" does. 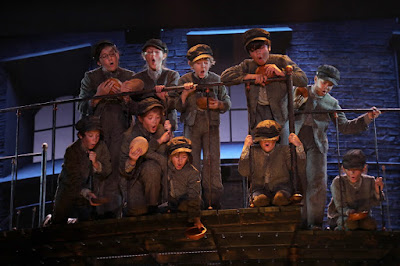 Lionel Bart's "Oliver!" retells the classic story of Oliver Twist, a young orphan boy who runs away from his workhouse surroundings and meets The Artful Dodger, a pickpocket of sorts, who invites him to join and live in a household of young boys (girls are added for this production) run by Fagin, an older gentleman who trains everyone to rob and steal for their master in exchange for food and lodgings. 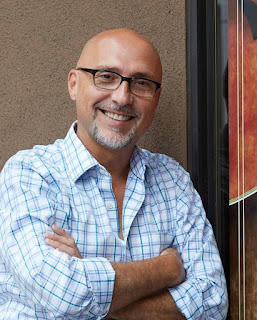 Ruggiero's ingenious, deeply moving staging of "Oliver!" brings the audience face to face with the bleakness and grim realities of life and the human condition in 19th century London without the sweet comforts and strawberry syrup of other "Oliver!" revivals that exist solely to entertain and soften the blow without any semblance of realism. There are laughs, of course. And some of the musical numbers are deigned to bring a smile to your face.
But what's refreshing and unique about this production is that it shatters your emotions using characters and situations that are painstakingly real and completely aware that they exist in a crowded environment grappling with chaos and the concept of their own morality.

That said, the musical opens with a new, ground-breaking moment that chronicles the unhappy birth of young Oliver followed immediately by his real mother's death. It's a pivotal scene that sets the tone for what's to follow as Ruggiero reworks and reshapes some of the material to heighten the play's realism and story board advancement. Bill Sikes, for example, is much more scarier, menacing and sinister than before. He is meant to frighten you and he does. But underneath, he loves Nancy. He hurts Nancy. He bruises and kills Nancy. But yet there's a strange, acceptable desperation to their odd coupling that other productions leave unanswered. In turn, Nancy's big musical number "As Long As He Needs Me"  becomes not only a cry for help about victimization, but one that explains Sikes' dominance over her, in and out of the bedroom. And sadly, she won't walk away. 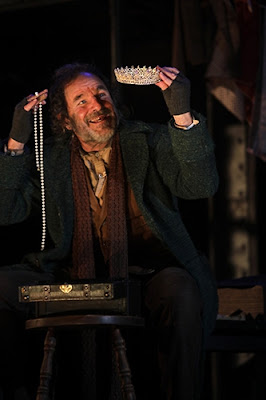 Elsewhere, the heat is purposely turned up on both Mr. Bumble and the Widow Corney for comic relief as they engage in some well-orchestrated flirtation and sexual frivolity that brings more dimension and scope to their characters. This conceit also extends to the characters of Noah Claypoole and Charlotte as they too find comfort in anything and everything sexual.
Fagin, in turn, is still fun. But here, he is much more criminal and crooked and there are many more sides to his already idiosyncratic personality. Bet, Nancy's sidekick, also gets more to do this time round (both musically and acting-wise) instead of being just a one-note character. And three songs, which are often cut from the story...."I Shall Scream!" "That's Your Funeral" and "My Name"......are wisely retained, reworked and played out to their fullest capacity in very exciting, imaginable ways.

Despite some changes to the story, "Oliver!" is still "Oliver!."
When necessary, Ruggiero amps up the musical's playfulness, high spirit, wonderment and sense of adventure. Given the musical's London setting, he also pays close attention to the attitude, the personality and the different class representation of the many characters who populate the "Oliver!" story. Here, as in "Rags," which he directed as the Goodspeed last season, he is very conscious of the period, the setting, the style and the heartbeat of everyone involved and everything that happens to them as the story evolves. It's all beautifully realized and perfectly in sync with the songs and the dances set forth by his creative team. 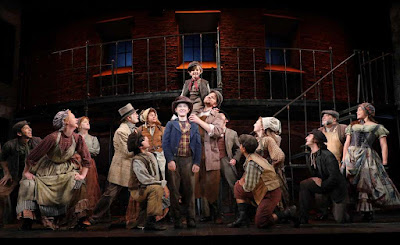 With "Oliver!" (and "The Will Rogers Follies" before that), Michael O' Flaherty celebrates his 27th season as Goodspeed's resident musical director. He's talented. He's challenged. He's carefully attuned to the choices and different styles of the musical's that round out the theater's year-by-year calendar. His orchestral team of musicians is first-rate. And when teaching the songs, the harmonies and the intricate choral numbers to his team of actors and singers, he always gives 110 percent.

Here, he does an incredible job bringing the popular Lionel Bart score to life. Assisted by F. Wade Russo, Pete Roe, Liz Baker Smith, Karin Fagerburg, Matthew Russo and Sal Ranniello,  O'Flaherty conducts "Oliver!" with inspired virtuosity, vision, thought and imagination. Yes, we've heard the songs before. Yes, we know who sings them. Yes, we know what's going to happen. Yes, we know what song goes where in both Act I and Act II. But it doesn't really matter. With O' Flaherty at the helm, it's as though we are hearing "Where is Love?" "Food, Glorious Food" and "It's a Fine Life," among others, for the very first time.

Lastly, there's also a bawdy, brazen, in-your-face truthfulness to the proceedings, which other, less-accomplished musicians and musical directors miss. Here, O' Flaherty and company always know what buttons to push. You want dark, you get dark. You want sexy or frothy, you get sexy and frothy. You want endearing or character-driven. You get endearing and character-driven. No matter what direction or tone the musical story takes, it's all marvelously conceived and controlled. 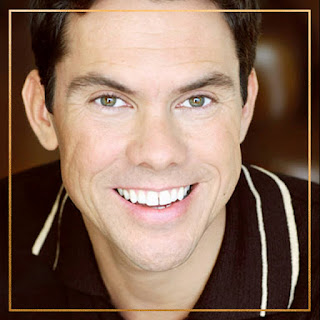 Given its Dickensian roots, the choreography in Lionel Bart's "Oliver!" can't be dished out as Broadway escapism or candy-coated nostalgia with a raspberry twist. In order for it to work its magic and work it well, you need someone behind-the-scene's who gets Dickens, understands Dickens and has a working knowledge of the 19th century "Oliver Twist" novel and its dark and twisty machinations. Otherwise, things could get pretty dicey or end up looking like "Half a Sixpence" meets "Oliver Twist: American Style."

The employment of British-born James Gray (he hails, from Bristol, UK) as choreographer for this particular "Oliver!" is a stoke of genius on everyone's part. The fact that he's English definitely helps  this "Oliver!" stand dark and tall like something you'd find in a 19th century English music hall, London's Black Market or the backstreet alleyways that lie in close proximity to the streets and locations referenced by Dickens in "Oliver Twist."

Pro that he is, Gray delves head first into the musical numbers like a 19th century historian and crafts them with passionate fervor, angst, gritty charm and spindly authenticity. He is very conscious of the musical's many different settings, its bleak and grimy characters, the different classes they represent and the darkness of Dickens's imagination and wordplay. Everywhere you look there's an authentic whiff of the real Dickens, whether its the opening "Food, Glorious Food," the lively "Consider Yourself," the crafty "Oom-Pah-Pah," the thievery paean "You're Got to Pick a Pocket or Two" or the colorful and endearing  "Who Will Buy?"

As choreographer, Gray surprises, cajoles and excites. He takes chances. He reinvents. He reinterprets. He leaves you awestruck. And, he never once, repeats himself. As "Oliver!" unfolds, he makes the right, appropriate choices in terms of style, period, mood, movement, beat, rhythm and interaction. It's all very, very English and beautifully in sync with Ruggiero's direction, O' Flaherty's musical direction and the marvelous, inventive musicality of the entire "Oliver!" This is "Oliver!" like you've never seen before. 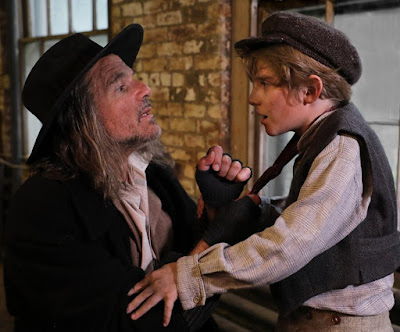 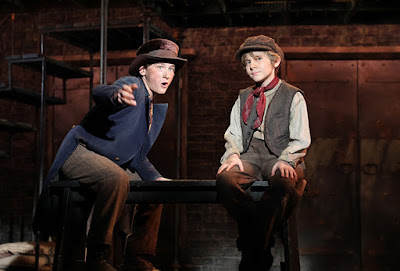 Because everyone of these performers is so very right for the the parts they have been asked to portray by Ruggiero, O' Flaherty and Gray, the actual "Oliver!" material brilliantly unfolds in the manner it was conceived by Lionel Bart. Nothing looks rehearsed. Nothing looks out of place. Nothing fall flat. Nothing is hurried or calculated. The dialogue, some of which is pulled from the original "Oliver Twist" story by Charles Dickens, is believably imagined and rendered. The beats, the pauses, the exchanges, the character interactions and the breaks unfold quite naturally. And when it comes time for a few heated jolts, scares, surprises and nasty twists of fate, everything is reenacted in true Dickensian style. 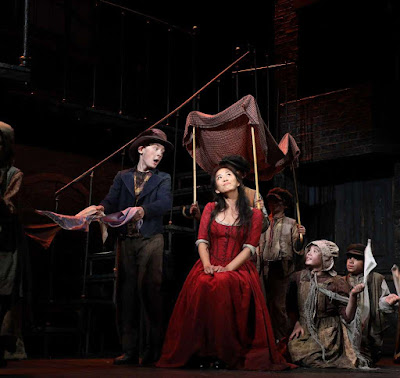 Vocally, everyone delivers his or her musical number or numbers with fluent efficiency, flair and imagination. They also take their time to express and convey the intended meaning behind each and every one of the Lionel Bart songs. And in terms of casting, the entire "Oliver!" cast look, act and behave as if they stepped out of the Charles Dickens novel which serves as the musical's inspiration.

In conclusion, "Oliver!" is a smart, dynamic production full of contrast, style, polish and cliffhanger quick-footedness. It is full of great voices and surprises. The Dickensian story itself accentuates its relevance through a uniquely different, more credible eye. It pulls you in and keep you there for well over two hours. Musically, it overflows with apt darkness, wit, charm and endearment. And the 19th century environs of the Goodpeed itself, lend itself nicely to the story at hand and the people who bring this musicalization of "Oliver Twist" to life, night after night. Or at any given matinee. 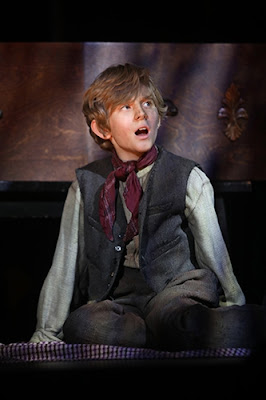