From the Desk of Jim R, Take 2, Column 86, A Review: "Barefoot in the ParK" (Sharon Playhouse)

Then and now, some things never change.
Rents in New York City are pricey.
Fifth-floor walk ups are exhausting.
Heating is problematic, especially in the winter.
Landlords are pricks.
Neighbors are quirky, bothersome, crazy and idiosyncratic.
And almost always, something goes wrong when you least expect it.

In Neil Simon's blissful comedy "Barefoot in the  Park," two newlyweds, fresh from spending six days honeymooning at New York's Plaza Hotel, are ready to settle into their new top-floor apartment on East 48th Street.
He's uptight.
She's a free spirit.
There's no bathtub.
There's no drinking glasses.
The bedroom is so small, it can only fit a twin bed.
It's winter.
There's a hole in the roof.
There's no heat.
And oh, yes, the furniture hasn't arrived yet.

Not to worry.
This is Neil Simon.
And this oft-performed comedy is not only worth a revisit, it's a winner chock full of laughs, surprises, eccentricities, love and merriment. 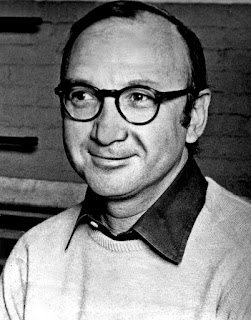 The trick, of course, is to do it right. No gimmicks. No long pauses. No overkill. No set ups. No calculation. No obvious kick to jump start the punchline.
At Sharon Playhouse, the enlistment of Clayton Phillips as director of "Barefoot in the Park," is a stoke of genius. He understands Neil Simon. He gets Neil Simon. He know what to do with Neil Simon. He knows what not to do with Neil Simon.
He also knows and understands the play script, the characters, the scene changes and the progression of the story over two separate acts. Wisely, there are no updates or changes to the dialogue. It's the 60's. That's it. End of! 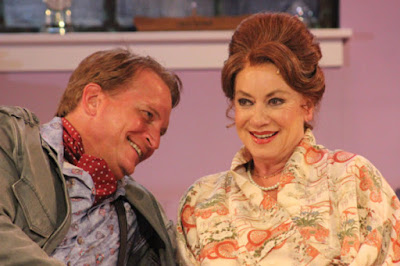 That said, Phillips crafts one of the best productions of "Barefoot in the Park" that has been showcased over the last 20 years. Everything about it is right; the casting, the acting, the set design, the lighting design, the costumes, the props, the furniture, the music, the sound cues, the subtleties, the rhythms, the pacing, the jokes, the pauses, the set ups, the interactions, the poses, the positioning, the mannerisms, the blocking, the stage business, the innuendo. Everything simply falls into place ever so sweetly and magically as if it is all happening in real time without any form of rehearsal process, whatever.
The latter, of course, is meant as the highest compliment to every involved in the entire production, on stage or off, at Sharon Playhouse.

As "Barefoot in the Park" unfolds, Phillips keeps the action moving at lightning speed, pausing now and then, to get all of the Neil Simon subtleties, nuances, shadings, colors, beats and pauses across while taking the characters and the audience along for the ride. In Act 1, one of the key jokes is the fact that it's not only winter outside, but everyone of the characters has to walk up five flights of stairs (six if you count the outside stoop) and enter an empty apartment with no furniture.

In most productions, this running gag is never fully realized or acted upon by the cast or the director. It's there, but mostly, as an after thought. Here, Phillips does the complete opposite. The sound, in the hallway and the approaching footsteps, has a perfectly synced echo sound which complements the pending action. When we finally see the characters coming up the last flight, holding and clutching onto the railings, the doorway and finally, entering the apartment, they can barely walk, talk or find their male or female composure. What follows produces huge, huge belly laughs, just the way the playwright intended.

The wild and wacky stage business that Philips gives each of his actors (John Champion as the Telephone Man, Marc Boissey as the Delivery Man, among others) is skillfully timed, shaped and molded and reminiscent of stand up comedy from the old vaudeville days. But again, it is never forced or reenacted like bad theater at an eight grade school play. It is very real, very energetic and very honestly conceived. In Act II, that same conceit applies to Paul and Corrie's big, heated argument, Victor Velasco's hilarious seduction of Mrs. Banks (Corrie's mother) and the craziness of the morning after. 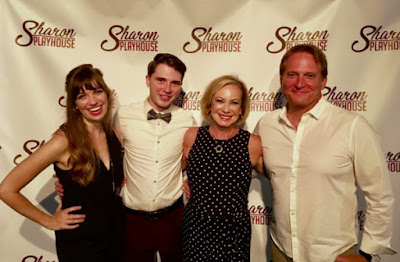 As Paul Bratter, the stuffed-shirt husband and young new lawyer and newlywed who tries to maintain his calm and  keep his suits and pajamas pressed tight and clean, Craig Bryant Belwood puts a decidedly different spin on the character of Paul, which, in most productions, is normally played as a heartthrob or romantic leading man. This Paul, however, comes across like Clark Kent, Felix Unger, Matthew Broderick and George Bailey, all rolled into one. It's a change that Belwood invests with the knowledge, confidence and charm that the part calls for, aided by some hilarious physical shtick and broad comic stokes that make this Paul Bratter come alive in ways you really haven't seen before. It's a win-win situation for all. And wait till you see his big quarrel scene in Act II. Simply hilarious. 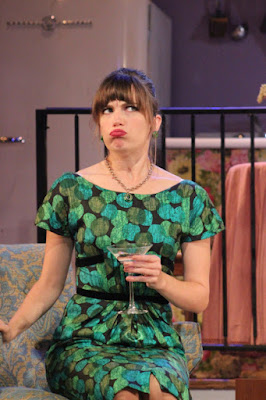 Rebecca Tucker, in the role of Paul's wife Corrie, is perky, pretty, loving, tender, vivacious, spirited and caring. It's a part she plays with the exact energy, pulse and adventure Simon envisioned for the character when he created "Barefoot in the Park." But she doesn't just play Corrie, she owns it. Her line delivery, her mood swings, her character interactions, her playfulness, her giddiness and her angst is all very real, honest and brilliantly orchestrated. She is so perfectly in sync with the character, she never once appears to be acting. She's the real deal: 100 percent. If  they ever do another revival of "Barefoot in the Park" on Broadway (the last one was done in 2006),  just ring Tucker. She's the perfect fit.

Susan Cella, in the role of Corrie's mother, Mrs. Banks, commands and demands your attention whenever she's on stage. It's a role she invests with a comic style and persona that is pure Simon through and through and one where she gets the most out of every line, pause, beat and rhythm that both Phillips and the playwright toss her way. She also handles the show's slapstick and physical demands (her comic expressions are priceless) like someone who has been doing this sort of broad comedy all her life. Who knows? Maybe, she has.

On Broadway in "The Pirates on Penzance" or on tour in "Grease" or "Annie Get Your Gun," Rex Smith was a natural, honest and energetic performer who took hold of a part, made it his own, ran  with it and always traveled that extra mile. It's a creative process that works wonders here as the actor steps forth to reenact the part of Victor Velasco, the suave, eccentric upstairs neighbor and continental roué that is very much a flirt, a ladies man, a cad and a bit of an oddball all rolled into one. His performance is dashing, comical, hilarious and whimsical, but very, very real. And he plays it just the way Simon meant for the character to be portrayed. 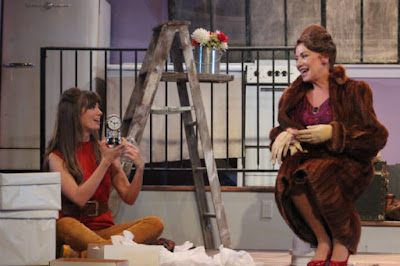 "Barefoot in the Park" is yet another triumph for Sharon Playhouse in a stellar summer season lineup that has included Cole Porter's "Anything Goes" and "All Shook Up."  It is well-acted, smartly directed, cleverly designed and wonderfully respective of the original source material created by  Simon. Coming to Sharon, CT, fifty-five years after it first opened on Broadway, it is still a very funny, funny show. It make take place in 1962, but the story, the dialogue, the characters and the laughter is still very timely. It is well worth a trip or two to this charming, first-class theatrical venue.
So grab yourself a ticket and enjoy.

Posted by JimRuocco at 4:38 PM