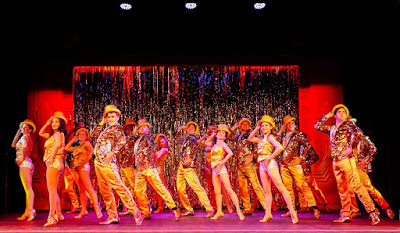 "A Chorus Line" has it all.
There are conflicts and clashes.
There are explosions of hope and freedom.
There is restlessness and curiosity.
There are also some deliciously wicked bits about boners, tits, ass, homosexuals, dressing up in drag, dance class, acting class, "The Red Shoes," being Puerto Rican, being Chinese and being the misunderstood straight boy who really likes to dance. There is also that hungry cry for acceptance, expression and artistic freedom in the uncertain landscape of the Broadway musical world.

The concept for "A Chorus Line," as devised by James Kirkwood, Jr., and Nicholas Dante, is incredibly simplistic, clever and alarmingly unique. As the musical unfolds. a select group of dancers are taken though the painful yet rewarding process of a lengthy audition for an upcoming Broadway show. Lining up along the front of the stage, they talk about themselves, their motivations, their ambitions, their childhoods, their backgrounds, their sexuality, their heartaches, their careers, their futures and why they all became dancers. 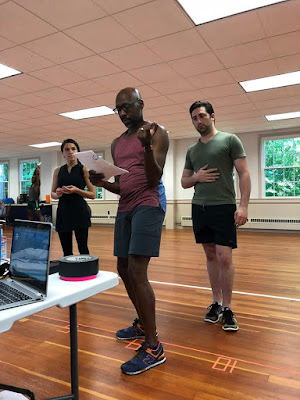 "A Chorus Line" is being directed by Todd L. Underwood who recently staged and choreographed the exhilarating revival of the 1972 Broadway hit "Grease" at Ivoryton Playhouse. Here, Underwood crafts a fascinating production that maintains a great sense of passion, realism, optimism and fidelity.

Yes, "A Chorus Line" is 43 years old. Yes, most of the audience have seen the musical before. Yes, the dancer's life in Broadway theater has evolved since the musical first sprang to life back in 1975 off-Broadway at the Public Theater before transferring to Broadway's Shubert Theater, three months later.

Regardless, Underwood keeps the musical locked in the time frame from whence it came. But his approach is fresh, timely and invigorating even if you already know how it all ends. Throughout the production, he delivers many home truths about the era, the people, the rejection, the pride, the competition, the gayness of some of the male dancers, the lifeline of a dancer and show business, in general. Anyone, in turn, can empathize with their situations. We've all been there at some point in our lives. 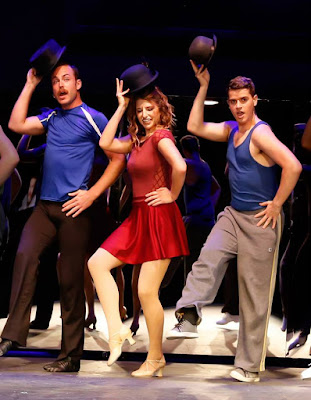 The closeness of actor to audience also allows one to witness things they might have missed in a large Broadway theater or National Tour venue. More importantly, the in-your-face theatricality of it all, asks you to play judge or casting agent before the final eight dancer's are selected at the show's conclusion. The process, of course, is irresistible.

Doubling as the show's choreographer, Underwood pays homage to Michael Bennett's original choreography, but brings his own sense of style, purpose and design to the proceedings. There is great variety in his dance moves, all of which excites with definitive scope when the whole ensemble dance together. It's so refreshingly delectable, a feverish buzz and pizzazz fills the auditorium that unites both actor and audience as one.

The Tony Award-winning musical  score by Marvin Hamlisch (music) and Edward Kleban (lyrics) includes the famous finale number "One;" the hauntingly romantic "What I Did For Love;" the wickedly playful and acerbic "Dance: Ten; Looks: Three;" the stirring and poignant ballad "At the Ballet;" and "I Hope I Get It," the anonymous dancer's desperate cry for work on Broadway and a guaranteed weekly paycheck. 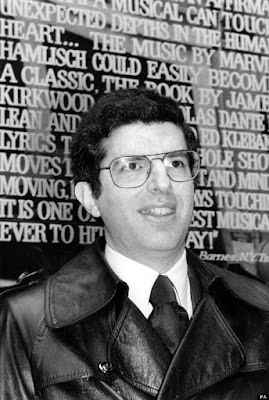 At Ivoryton, Michael Morris, whose in-house musical direction has included "Rent," "West Side Story," "Saturday Night Fever" and most recently, "A Night With Janis Joplin" and  "Grease," breathes new life into the popular "Chorus Line" score, using the polished, personal and perfectly honed Broadway musical showmanship he is famous for.

Part of the magic and charm stems from Morris' ability to bring real emotion, grit and humor to each of the musical numbers as "A Chorus Line" evolves. Whether they are solos, duets or perfectly synced ensemble numbers that deftly arise from the main personal stories that are being told, they are reproduced with faithfulness, allegiance, class and lush, emotional quality. 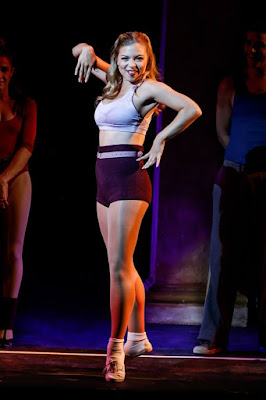 In "Grease," Alexa Racioppi rocked the Ivoryton Playhouse stage with her flip and colorful portrayal of do-gooder Patti Simcox. As Val, the foul-mouthed dancer who opted for plastic surgery to thrust her into the Broadway spotlight, she not only gives the performance of the season, but turns her big musical number "Dance: Ten; Looks: Three" into a glorified showstopper that makes you want to shout back "Encore," "Encore," Encore."
Vocally, she is pitch-perfect and never misses a beat. Acting wise, she's every bit as charismatic and sexy as Pamela Blair who originated the role back in 1975 on Broadway. She also has great fun saying the world "Fuck" multiple times and showing off her womanly assets, as dictated by the script and director Todd L. Underwood. 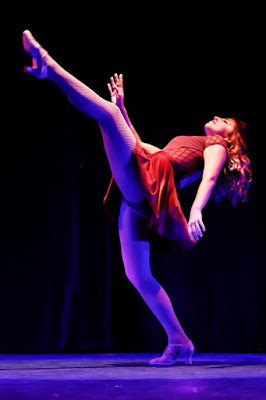 Stephanie Genito's Cassie is an intriguing blend of pathos, confessional despair and dance exhibitionism. The latter, of course, permeates her big number "The Music and the Mirror," performed with high-kicking stamina, rawness and desperation as her character begs for one last change "to dance," if only in the chorus. We really feel and understand Cassie's pain and fight for survival.

Natalie Madlon is as right for Diana as was Priscilla Lopez in the original 1975 Broadway production. She also delivers Diana's two big songs "Nothing" and "What I Did for Love" in an achingly real and beautiful voice that would make both Hamlish and Kleban stand up and cheer. It's one of those standout performances that lingers long after the production has ended. 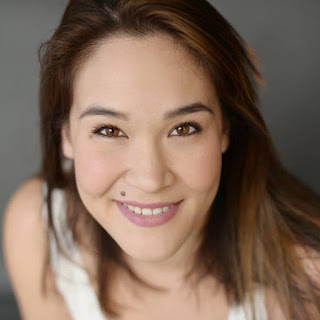 Lili Thomas' Shelia is bold, brassy, sarcastic, bitchy and fucked up, which is exactly what the part calls for. And Thomas never misses a beat, tick or quirk. Edward Stanley makes a suitably compassionate, authoritative Zack. Schuyler Beeman hits all the right character notes as the gayish Greg, as does Sam Given, in the role of the wildly flamboyant Bobby.

There is beauty, style and grace to Kayla Starr Bryan who plays Bebe. That same analogy applies to Liv Kurtz, as Maggie. Both actresses make "At the Ballet" completely memorable on their own or when they are joined by Thomas' Sheila as the song evolves ever so passionately. This is yet another musical number that makes you want to cry, "Rewind, please!"

Carl Zurhorst (Al) and Amanda Lupacchino (Kristine) make "Sing" soar musically. Their comic timing and complete grasp of the song's quirky and crazy concept is sensational. Corey Candelet's Don overflows with charm and charisma while Ronnie S. Bowman, Jr.'s, Ritchie commands your attention, whenever he's on stage. As a dancer, the effect is just the same. Simply brilliant.
. 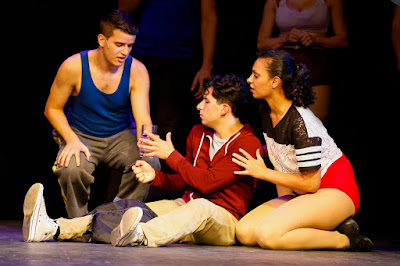 As Paul, Joey Lucherini renders an endearing, impassioned portrait of a young man anxious for familial and showbiz acceptance through a very lengthy, deftly-paced monologue during which the character discusses his homosexuality and performing in drag at cheap clubs while waiting for his break into Broadway theater. It's all very, very moving. 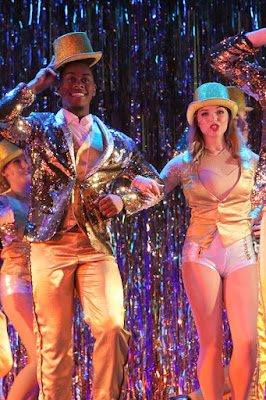 Lovingly staged and lovingly recreated and imagined, the Ivoryton Playhouse production of "A Chorus Line" is an exhilarating celebration of dance and the dancers who are part of its choreographic ensemble. The show's timelessness and simplicity still impresses. The cast sizzles and gives individual voice to each and every one of the characters they portray. And finally, the singing, the dancing and the personal stories are authentic, believable and consistently superb. 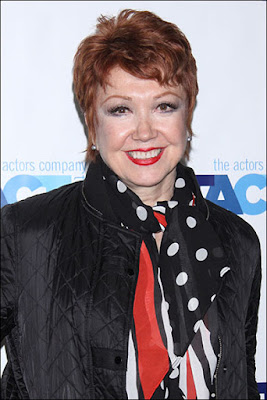 This review is dedicated to Donna McKechnie, the actress/ dancer who created the role of Cassie in the original 1975 Broadway production

Posted by JimRuocco at 1:55 PM