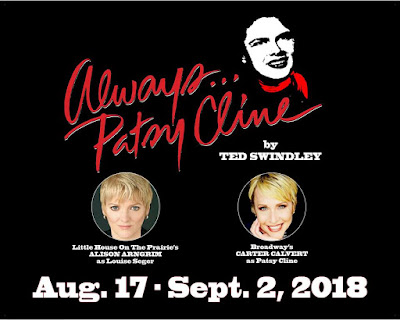 It's more than just a tribute. It's a slice of country music Americana with a down home twist.

"Always...Patsy Cline," which has settled into Sharon Playhouse for an exclusive, very exciting run, is based, in part, on the real-life friendship between the Nashville country star and Houston housewife Louise Seger.

From the moment Seger first heard Cline pour her heart out in song on a 1957 television broadcast of 'The Arthur Godfrey Show," she became the singer's number one fan and continually hounded the local radio station's disk jockey to play Cline's music continually on the radio. He was more than happy to oblige. 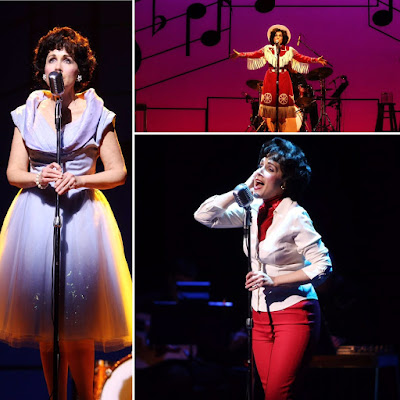 In 1961, Cline and Seger officially met when the singer, who, was travelling alone for an concert engagement, bumped into her biggest fan at the venue itself an hour-and-a-half before showtime. It was there that their friendship began and would continue via phone calls and letters until Cline's untimely death in a plane crash two years later.

The musical, fondly looks back at their relationship, combining humor, song, dance, sadness and sweet dreams. The actual narrative, delivered by Seger herself, also pinpoints the high points of Cline's chart-busting success through the songs that made her famous. Sweet, oh, yes.

In the directorial chair, Alan Wager, the very talented artisan who staged the stylish and tuneful "Anything Goes" earlier this season, brings great knowledge, wit and understanding to the country-western backdrop of "Always...Patsy Cline." There's admirable clarity, charisma, dazzle and pathos to his staging. Not to mention a heartfelt tenderness, softness and kinship that gives the two-act musical, added strength and passion. 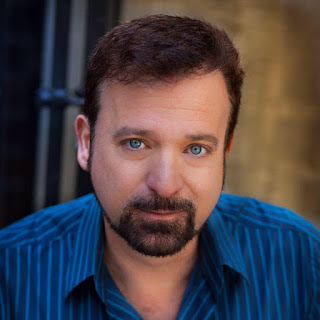 Wager, however, is not one to rest on his laurels. Working from Ted Swindley's already-proven script, he delves head first into its emotional center and looks for new ways to make a difference, celebrate the voice and sound of Patsy Cline and show what the singer and Seger really had in common.

This creative process, a clever mix of color, dash and nuance, fuels and drives "Always...Patsy Cline" past the running gate. The characters, for example, are more realistic and full-bodied. The jokes, the comedy, the stage business and the stage blocking have more spark, punch and animation. There's also more pizzazz to the story, which, in the hands of someone less experienced, would have ended up as just another musical, followed by one song after another. Here, Patsy Cline's heritage is timeless, uninhibited and universal. Wager wouldn't have it any other way.

The music songbook for "Always...Patsy Cline" contains the following songs: "Back In Baby's Arms," "Anytime," "Walkin' After Midnight," "I Fall to Pieces," "It Wasn't God Who Made Honky Tonk Angels," "Come On In (And Sit Right Down)," "Your Cheatin' Heart," "Stupid Cupid," "You Belong to Me," "San Antonio Rose," "Lovesick Blues," "Sweet Dreams," "She's Got You," "Shake Rattle and Roll," "Three Cigarettes in the Ashtray," "Crazy," "Seven Lonely Days," "If I Could See the World (Through the Eyes of a Child)," "Just a Closer Walk With Thee," "Blue Moon of Kentucky," "Gotta Lotta Rhythm," "Faded Love," "How Great Thou Art," "True Love," "If You've Got Leavin' on Your Mind" and "Bill Bailey." 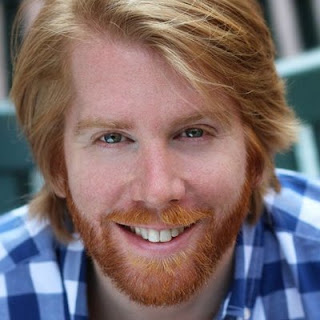 At Sharon Playhouse, musical direction is provided by Eric Thomas Johnson whose orchestral credits include "Into the Woods," "In the Heights," "The Drowsy Chaperone," "Fiddler on the Roof" and "Oklahoma!" A deft, smart and powerful  musician with a real flair for this sort of flavorful entertainment, Thomas crafts a lively, memorable song fest that captures and radiates the talent, the drive, the charm and the spunk that was Patsy Cline. 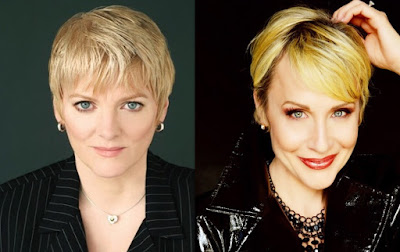 The performances: simply brilliant.
There's a smooth, smoldering passion and richness to the vocal sound of Carter Calvert, which makes her a natural for the part of the late country western music star. Affectionate, sorrowful, personal and vibrant, she transports the audience back to a time long gone by with genuine affection for Patsy Cline, her music, her song style, her legacy and the star power that capitulated her to stardom in the recording industry. And like the singer herself, she becomes lost in the emotion of the music and its lyrics, wistfully, gracefully and naturally. 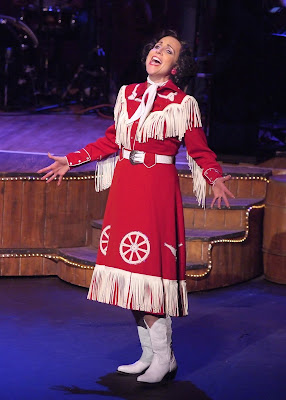 The voice that is embodied here is Calvert's, of course, with just the right mix of Cline's indelible sound, phrasing, range and sassiness. It's all very original and marvelously pitch-perfect as the actress recreates that magic that was "Crazy," "Sweet Dreams," "Walkin' After Midnight," "I Fall to Pieces," and so many others. Calvert also loves being in front of an audience whether she's singing, drinking, chatting, talking or journeying down memory lane pulling one hit song after another from the trunk load of song hits fashioned by the show's creators.There's such star power here, it's impossible to take your eyes off her.

As Cline's most devoted fan Louise Seger, Alison Arngrim offers a five-star performance that amazes, cajoles and excites at every musical, comical and emotional turn. It's a role she was born to play and play it she does like a red, white and blue firecracker on the Fourth of July. Her grasp of the show's comedy shtick, its jokey, well-timed one-liners, its vaudevillian burlesque stage business and several impromptu ad libs with the audience is absolutely brilliant. She's on fire from start to finish and there's no stopping her. And wait till you see her bump-and-grind bit. Simply, amazing. 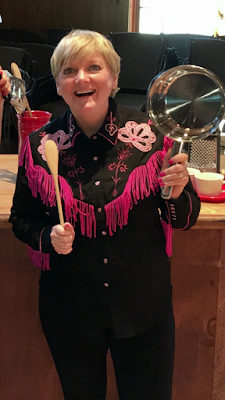 The actress, who, most people remember as the spoiled, selfish and devious Nellie Oleson from NBC's "Little House on the Prairie," radiates such natural charm and charisma, you could watch her perform all night. She is well-matched opposite Calvert. The duo share an on-stage bond and camaraderie which makes the Cline/Seger friendship completely palpable  And when, they sing a song or two, their completely different musical styles, blend together as one, most energetically.

"Always...Patsy Cline" is a heartfelt, endearing musical that celebrates the legacy of this incredible entertainer, her music, her star power and her friendship with Louise Seger, the Houston housewife who became her biggest fan. The stellar six-piece band, led by Eric Thomas Johnson is right in sync with all things Patsy. And the two lead performances by Carter Calvert and Alison Arngrim are sweet, emotional and ovation worthy.
The two-act musical closes the 2018 summer season at Sharon Playhouse, which included the show-stopping "Anything Goes," the vibrant "All Shook Up" teen showcase and Neil Simon's best-loved comedy "Barefoot in the Park."
With an impressive line up such as this one and the promise to keep the Playhouse running year-round with cabaret showcases and fun-night's-out until the summer of 2019, expect Alan Wager (Artistic Director) and Robert Levinstein's (Managing Director) tenure at the Sharon home base to last a very long time. They love theater and so do we. They also go the extra mile in everything they say and do, and that, in a nutshell, is what puts this savvy theatrical producing duo at the top of their game. Bravo! 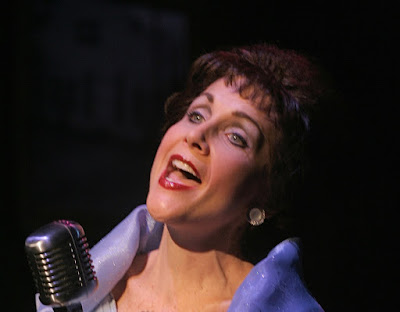