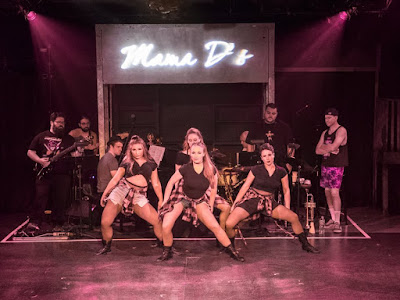 "Mama D's Gay Nineties Romp" is a lively fusion of comedy, music, magic, dance and burlesque that draws you into a seductive world of entertainment where anything can happen and does and everyone dances to a decidedly different beat.

Boys wear dresses, high heels and mermaid costuming whenever the mood strikes them. Or they simply become androgynous when dancing alongside the show's females.

Girls wear naughty feminine garb and men's clothing. They also gyrate madly, hump a basketball or two and come into the audience shaking their booty with wild abandon.

Barbie invites Ken to "come into her box."

Sexual innuendo and one-liners are delivered with vaudevillian aplomb. 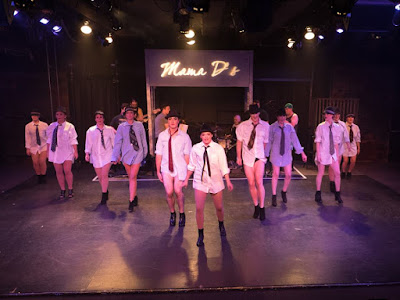 Not to worry.
It's all part of the fun and excitement that "Mama D's" is famous for.

It's all pretty amazing...and then some.

And oh, yes.
No one is naked.
No one accidentally uncovers their private parts.
And no one, steps out of line unless it is dictated in the script.
This is the updated pre-war Berlin of Christopher Isherwood's "Cabaret" stories mixed with a flavorful dash of 1990's decadence and turn-of-the-century British musical halls. 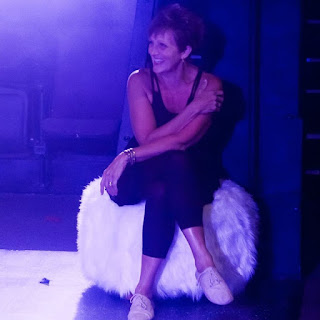 At Playhouse on Park, "Mama D's Gay Nineties Romp" has been conceived, directed and choreographed by Darlene Zoller, the theater's co-founder and co-artistic director whose directing/choreographic credits include "Cabaret," "Chicago" and the most recent "In the Heights," which found audiences cheering her incredible choreography night after night. A deft, free-spirited and insightful director, she instills this production with just the right amount of sexiness, boldness, brashness and bawdiness, the script calls for. She knows exactly what buttons to push, how to develop and shape a punchline, when to turn up the heat, when to soften it and how to catch her audience off guard when they least expect it.

In a musical production of this caliber where just about anything goes and does, all for the sake of entertainment, dance is everything. That is the lifeline of "Mama D's" and Zoller fills the Playhouse on Park stage with one exciting production number after another, each and every one different from the next. Given the show's R-rated concept, there is plenty of humping, riding, kicking, gyrating, slithering, bouncing, shaking and touching, all of which compliments the individuality and uniqueness of the numbers themselves. There's also a lot of spread legs on chairs, on the floor or in squatting positions that boldly recalls the heated magic and sensuality of Fosse in "Cabaret" and in "Chicago." Mix that with a bit of Zoller and the result is electrifying. 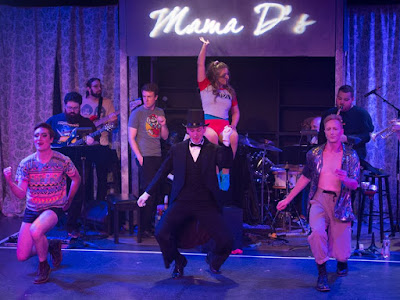 Here, as in "In the Heights," Zoller's creative genius explodes and explodes in glorious MGM Technicolor. There are sparks. There are flames. There is fire. There is style. There is uniqueness. There is individuality. There is passion. There is sensuality. There is amazing fluidity. Everyone is at the top of their game, doing what they love best: singing and dancing. No matter what Zoller crafts or creates, each and every dancer maintains that contagious flourish, zest, pulse and marvelous theatricality that Zoller is famous for. Stand alone or collectively, it's all pretty amazing.

The song book for "Mama D's Gay Nineties Romp,"  a collective mix of songs from the 1900's and 1990's, is a well chosen mix of music hall favorites, pop favorites, rock favorites and Top 40 hits guaranteed to get you all hot and bothered, which, when you think about it, is the point of the entire show. 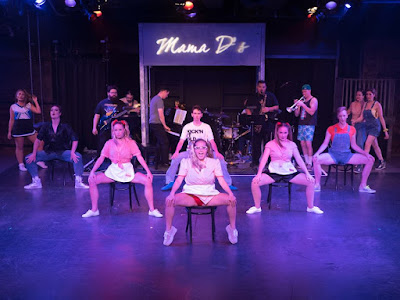 Strategically placed from start to finish, with comic bits, sexual innuendo, naughty burlesque and cherry-red shtick thrown in for extra measure, the songs themselves are sexy, inviting, playful, hot and heated. With Colin Britt, as musical director, and conductor of the "Mama D's" orchestra, each of the musical numbers fulfills its intended purpose and the show's ever-changing mood swings, gaiety and pulsating frivolity.

There are showstoppers, ballads, tangy ensemble numbers and songs that are syrupy-sweet and ripe for picking. Britt, in full control, has great fun with everything. And, the cast, from lead singers to ensemble, deliver breakout vocals and choral sounds that are full-bodied, imaginative and in sync with the "Mama D's" concept and allure. 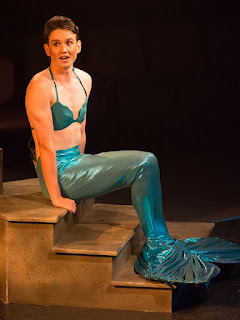 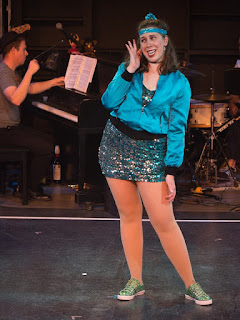 The cast, an intoxicating mix of actors, dancer and singers, is headlined by the charismatic and boyish Jake Blakeslee, from the Hartt School of Music, the always funny Amanda Forker, the sexy Sandra Manante and the dynamic Peej Mele. There are lots of other talented individuals in the cast, including Playhouse on Park's effervescent Meredith Atkinson, but "Mama D's" doesn't come with any playbill or listing of who's who. Nonetheless, everyone is in sync with the show's concept, it's bawdy humor and its hypnotic production numbers. They have as much fun performing as we do watching them.

"Mama D's Gay Nineties Romp" is must-see entertainment. It is naughty. It is sexy. It is wild. It is clever. It is passionate. It is exciting. It's the perfect summer entertainment for a hot summer night. It gets the juices flowing. It gets you all hot and bothered. It gets you clapping and stomping your feet. It gets you singing and singing out loud. It also invites you to witness some of the finest actors, singers and dancers ever to grace the Playhouse on Park stage. This is ovation worthy stuff that makes you want to shout "Encore" and "Bravo" over and over again. 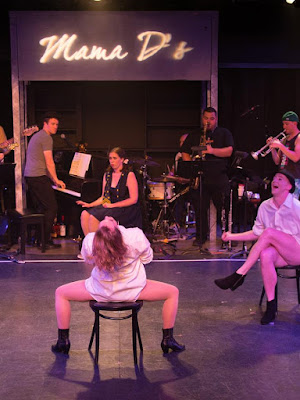