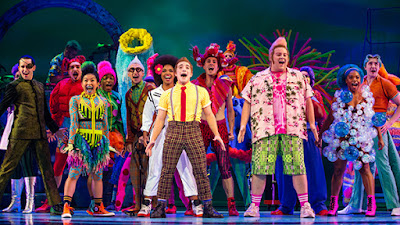 A head-spinning musical jam-packed with enough jaw-dropping magic, color, brightness, imagination and flourish to cause an explosion of the highest order, "The SpongeBob Musical" is a thrilling theatrical experience that pays homage to the long-running animated cartoon, but with a style and mind of its own that is absolutely brilliant at every single turn.

Make no mistake about it, this is a bubbly musical delight that is giddy, charming and heartfelt. It has been reimagined for the theater with optimism, bounce and good cheer. It turns adults back into kids with a contagious, good-hearted spiritness. And for children, it excites with a freshness and a  hypnotic magnetism that is all too irresistible.

The show's book, by Kyle Jarrow, is chock full of upbeat reminders about life, friendship and togetherness as well as wisely-timed bits and bobs about family, survival and instinct as the citizens of Bikini Bottom find themselves in danger from a Mount Humongous volcano about to erupt and destroy everything in its path.

Not to worry, though. This is the world according to SpongeBob and not Quentin Tarantino or Roman Polanski. So by the time Act II reaches its big frenzied climax, you-know-who saves the day and things end happily for all and life continues - as they know it - in Bikini Bottom. 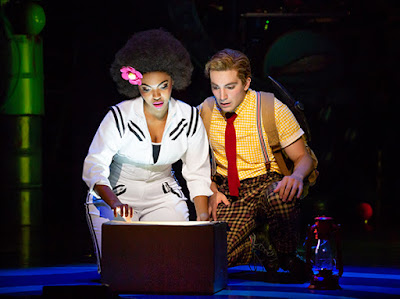 Staging "The SpongeBob Musical" is Tina Landau who directed the Tony nominated 2017 Broadway production of "SpongeBob SquarePants." A keen and crafty storyteller, Landau is completely akin to the well-imagined adventures of the title character, his aquatic friends and neighbors, the underwater city of Bikini Bottom and the musical story envisioned by Kyle Jarrow. She is the right choice to direct this grand and colorful musical that tips the light fantastic, raises the bar for avant-garde conceits, swims and basks in all its underwater glory and lovingly retains the light-hearted spirit of SpongeBob himself and his giggly, phantasmagorical thoughts, philosophies and ideals.

This is a big, expensive musical with mad attention paid to the look, feel and style of the watery playground and world conceived by the show's tremendously talented creative team including David Zinn (scene and costume design) and Kevin Adams (lighting design). No brain freeze, here. Or action that short circuits and gets swallowed up whole by the bigness of it all. Instead, Landau turns the SpongBob world into a giant 3-D coloring book of rainbow colors, bold colors and glow-in-the dark colors that keep the story alive and afloat with nary of hint of overexposure, overkill or calculation. Here, she knows what she wants and she goes for it. She also takes chances and giant leaps but never once sacrifices the story or its characters for the sake of larger-than-life visuals. 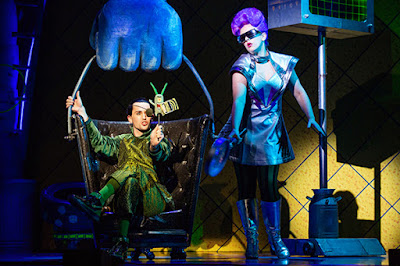 The musical, of course, is an eyeful but Landau's cleverly staged moments and revelations are genuine, crafty, rewarding and fulfilling. Things are fast, fluid and well-timed to move the action forward swimmingly (no pun intended). Everything happens for a reason. No two scenes are alike. No one gets upstaged. And nothing gets lost in the translation. What's fun here is watching how it all comes together with Landau pulling the strings and using some of the most ingenious staging imaginable. There are moments when you just sit there watching the action unfold, marveling at the directorial choices and bold strokes of Landau's creative vision and the humongous, take-charge attitude of it all. It's "Wow factor" every step of the way. 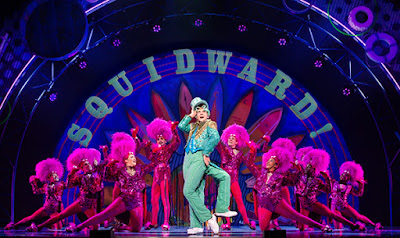 The songs themselves are peppy, delightful, engaging and plot moving. They are strategically placed throughout the story and naturally reflect the musical's themes, undercurrents, animation, eruption and joy ride mania. Musical director Patrick Hoagland, doubling as both conductor and keyboardist, brings a flavorful style and rhythm to the musical numbers that feeds off the energy and mindset of the entire cast, all of whom display extraordinary finesse and total confidence under his inspirational leadership. His fresh perspective and full command of the orchestra also complements and heightens the unexpected textures, the thematic sunniness and the potent charm of the music itself.

The choreography for "The SpongeBob Musical" has been devised by Christopher Gattelli. Not your typical Broadway musical stuff, it is fun house glam and glitz, happy go lucky tap, jazz and hip-hop and contemporary playground carnival all rolled up into one. It is original. It is spiraling. It is animated. It is commanding and confident. It is reactive. It is sharp and soft. It is full of whimsy, color and chain reactions. It also has a wonderful robust harmony about it. From production number to production number, there's a choreographic versatility to Gattelli's work, mixed with cartoonish athleticism, lyrical expressiveness, frantic electricity and humorous prompting. The dancer's confront the challenges and the versatility of the movements, beats and patterns with fearless aplomb. And yes, they are amazing. 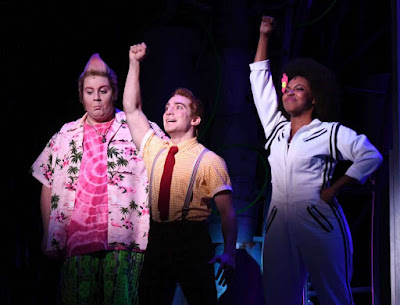 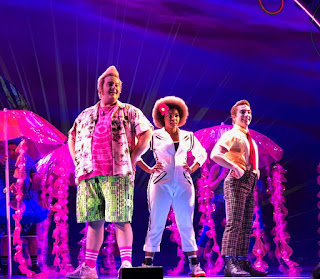 The two-act musical stars Lorenzo Pugliese as SpongeBob SquarePants, Beau Bradshaw as Patrick Star, Cody Cooley as Squidward Q. Tentacles, Daria Pilar Redus as Sandy Cheeks, Zack Kononov as Eugene Krabs, Tristan McIntyre as Sheldon Plankton, Morgan Blanchard as Patchy the Pirate, Ritchie Dupkin as Perch Perkins and Meami Maszewski as Pearl Krabs. Everyone is perfectly cast for their respective roles, each projecting the right attitude, mentality and personality associated with each of the parts they are asked to portray. As directed by Landau, they also offer more rounded, intuitive  portrayals of the popular SpongeBob characters with a smattering of Nickelodeon oomph and dash thrown in for extra measure. Vocally, everyone masters the melodic intricacies of the musical score and demonstrates an impressive flair for the show's different musical styles, mood swings, zaniness and important rhythmic influences.

As the show's self-titled SpongeBob, Lorenzo Pugliese is a dynamic, loveable and comical character with plenty of dash, presence and personality. Beau Bradshaw's Patrick Star is a sheer delight and Cody Colley delivers a show-stopping turn as the four-legged Squidward Q. Tentacles.

"The SpongeBob Musical" is sweet, frothy good fun in bright Crayola crayon colors that snap, crackle and pop with the adventuresome spirit the Nickelodeon TV show is famous for. Everything about it Technicolor theatrical from the sets, the costumes, the props, the scenery and the lighting. The cast is engaging, cheerful and naturally high. The songs are perfectly in sync with the storytelling. And the happily ever after ending leaves you begging and wanting more of this contagious, exhilarating amusement designed for kids and adults of all ages anxious to be swept up in the SpongeBob story and its very magical, saltwater world. 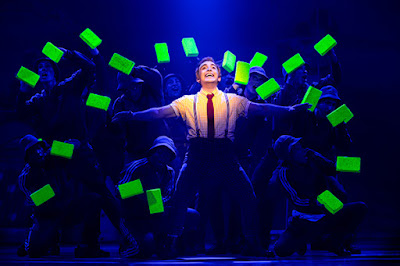 Photos of "The SpongeBob Musical" courtesy of Jeremy Daniel