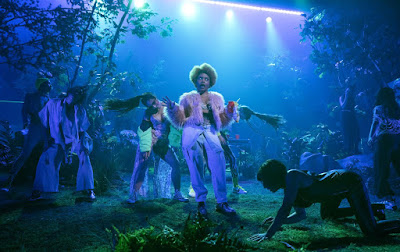 The apparent frenzy and wildness of Yale Rep's "Girls," a maddening, entertaining and bizarre new take on "The Bacchae" embodies all the certainty, authority, sexuality, absurdity and lather of a superbly ushered rave presented in glorious, acid-tripping Technicolor.

It sings.
It speaks.
It flashes.
It entices.
It satisfies.
It engages.
It delights.

It also celebrates Yale Rep's ongoing commitment to original, avant-garde works that are unique, odd and decidedly different but very much in the moment of expressive, dynamic and memorable theatre that is surreal, jaw-dropping, experimental and pretty much "out there." And "Girls" gets that message across with a refreshed admission spiked with a ritualistic leap and flourish, which is perfect for its story of female opinion, power, responsibility and collectivism. 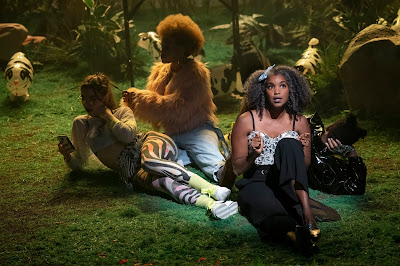 At Yale Rep, "Girls" is being staged by Lileana Blain-Cruz, a creative talent and director with a wild imagination and passionate confidence who moves crazily through the world of Euripides and Greek tragedy with a gift for tumbling madness, jazz-like dementia and revolutionary re-ordering. Here, wildness is the heart and pulse of this re-worked telling of "The Bacchae" and she fans out the bathos, anxiety and war zone hysteria with yelps, cries, chants, speeches and Bacchic shrills and laments that thrust the action forward like a hurried outdoor storm that intensifies and swirls absurdly out of control with its intensified flourish and force that demands attention at every turn.

Some of it, you grasp. Some of it, leaves you baffled and confused. Some of it, leaves you shaking your head in wonderment thinking, "What the fuck was that?" But in the long run, it doesn't really matter. Blain-Cruz knows exactly what she wants and she delivers it with delicious delinquency and lightning-bolt imagination, offset by quirky measures, tones and twists that arouse, sway, intrigue and tumble. It should also be noted that "Girls" plays like one big outdoor party of glee and trance-like abandonment with female voices front and center ready to reveal the strange, hypnotic and bizarre elements that have shaped and molded their already equally messed-up lives. 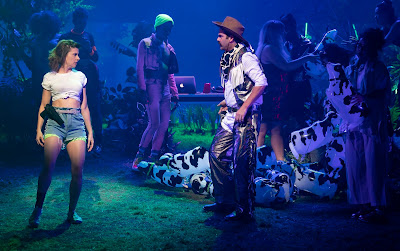 It's all pretty powerful stuff, strategically placed and ingeniously performed in between Raja Feather Kelly's pulsating, fevered non-stop choreography that's timed perfectly to the beat of background music that sizzles with pleasure-toting wickedness, delirium and in-your-face raunch and perversity.
Depending on the moment, some figures appear burdened, trudging slowly to the dance rhythms and beats at hand while others glide happily about expressing joy and personal freedom with infectious energy. They even find time to hump the scenery, play with inflatable plastic cows or flirt with one another via orgasmic enlightenment and debauchery.

"Girls" stars Nicholas L. Ashe as Deon, Jeanine Serralles as Gaga, Will Seefried as Theo, Tom Nellis as Dada and Haynes Thigpen as Cowherd/Rere/Acting Sheriff Officer Ronnie. The Girls are played by Gabby Beans, Ayesha Jordan, Amelia Workman, Zoe Mann, Daniel Liu, Keren Lugo, Julian Sanchez, Jenna Yi, Maia Mihanovich, Anula Navlekar, Jennifer Regan, Gregory Saint Georges, Jackeline Torres Cortes and Adrienne Wells. Everyone works individually or as a team to bring out the play's playful or tragic trajectory, its ironic words and conversations, its dark truths and propulsive illuminations, its barbed levity and comic counterblasts. With Blain-Cruz offering detailed insight on how everything should be played and acted before a live audience, the cast stands tall and proud covering the whole spectrum that is "Girls" with boldness, ingenuity, gusto and a dash or two of intimate, hydralazine strangeness. 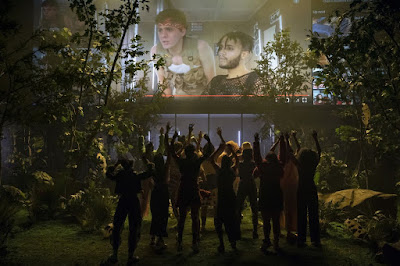 As theatre, "Girls" amps up the madness in energetic, weighty fashion, mixed with fantasies, observations, alerts, pronouncements and political stances that creates a hypnotic fervor that Yale Rep takes full advantage of. Its crazed, fucked-up take on "The Bacchae" is bizarre, mangled and dizzying with LSD-driven dazzle and a coked-up mindset that blasts you in the head, kicks you in the ass, toys with your senses and shakes you up vicariously in ways you never thought possible. Then, again, that's the point, isn't it? This is 21st century Euripides with a Studio 54 glaze and drug-induced, live stream euphoria that invites you to come in, take a look and succumb to its bold, water colored collage of fanaticism and derangement and then run out into the street dazed and stirred by the stoned, tripping, loaded insanity of it all. 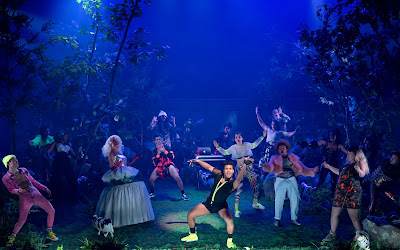