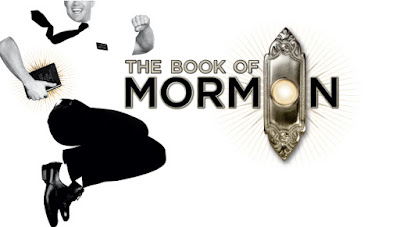 The national touring company of "The Book of Mormon" is a big, splashy, explicit musical parody that attacks Mormons, Mormonism and missionaries with a lively animating spark of intelligence and satiric elan, that is so much fun, its witty take on the beliefs and practices of The Church of Jesus Christ of Latter-Day Saints, is impossible to resist.

This is a musical that overflows with giddy contempt and stinging acidity as fresh-faced Mormons (is there any other kind?) head to Uganda to preach the word of their Christ and build a new congregation of followers anxious to learn all about the Third Testament of the Bible. There are laughs galore and plenty of bounce, bite, sting and color to keep you happily entertained at the expense of Mormons everywhere, including those headquartered in Salt Lake City, Utah and Independence, Missouri.
Who knows?  You may even find yourself curiously googling information about the holy book of Mormon itself or inviting a friendly Mormon or two over for an early Friday night supper. 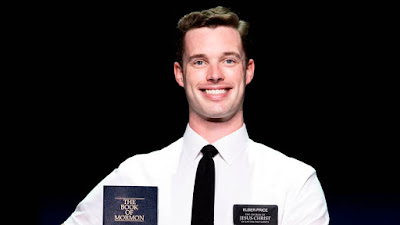 Staging "The Book of Mormon" is Trey Parker and Casey Nicholaw who won the 2011 Tony Award for Best Direction of a Musical. Here, they create a madcap world that is chock full of cartoonish wit, energy, chutzpah, vulgarity, blasphemy and gayness. There's jokes about dysentery, baptism, medicine, vagina's, the male penis, sacrilege, homosexuals, lesbians, Africa, sex with frogs, maggots in the scrotum, religion, famine, Satan, Jesus Christ, the Bible, sexual intercourse, blow jobs, poverty, resurrection,  "Star Wars," "Star Trek," "The Lion King," "The King and I" and so more more. Nothing, of course, is off limits, a running gag that allows Parker and Nicholaw to run hog wild in very original and creative ways that heighten the musical's enjoyment from start to finish. The whole show is mapped out with such flourish, depth and drive, nothing ever gets lost in the translation.  It's a wild and wacky ride that is both uplifting and incredible and one that shows why "The Book of Mormon" took home nine Tony Awards including Best Musical. 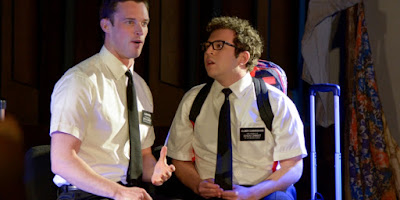 Gleeful, crazy and wonderfully harmonious, each of the musical numbers drives the production forward with heart, optimism, emotion and unabashed silliness. Satirizing organized Mormon religion with lampoons, pronouncements, declarations and playful escapist-like teasing and bashing, the tunes themselves are joyous, melodic, acidic and inspirational. They all fit perfectly into the framework of the story and are so very right for the characters who sing them and bring them to life night after night.

As "The Book of Mormon" evolves, musical director Andrew Graham and his orchestral team emphasize the extreme playfulness, madness and social jest of the music and lyrics, its twisty mindset and mood swings, its rainbow-tinged gay overtness, its saucy flavoring, its risqué implications and its over-the-top mechanics. Careful attention is also paid to the lyrical brashness of the piece, its tangy truths and upsurps, its magnificent wordplay, its deft phrasing, its jovial promiscuity, its distinct melodies and its giggly beats and rhythms. With Graham upfront and center, the orchestra is always in full swing and never once misses a beat or important song cue. They have fun. We have fun. They laugh. We laugh. And under Graham's expert tutelage, the entire cast (leads, supporting players, ensemble) deliver every one of the show's songs with the perfect pitch, confidence, pizazz and harmony intended by the show's creators. 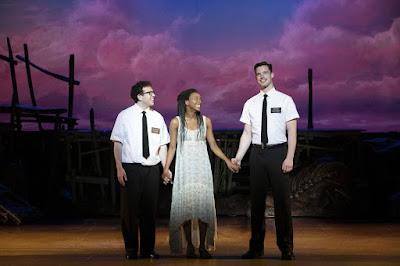 Given that fact that "The Book of Mormon" has been designed solely as pure escapism with an homage to Broadway's golden past, dancing is everything in a musical of this caliber. Doubling as the show's choreographer, Nicholaw concocts a sweet, pungent bubbly dance euphoria that mixes elements of George Gershwin, Fred Astaire, Gower Champion, Gene Kelly and Busby Berkeley, among others, with intricate, daring and highly original dance moves, maneuvers and stylizations that snap, crackle and pop in every color of the rainbow.  He takes chances and runs with them. He surprises and delights. He leaves you awestruck with giddy delight. And he never once, repeats himself. He makes the right, appropriate choices in terms of style, mood, movement and dance tableaux and brings a fresh, slick, distinct feel to the proceedings, offset by plenty of froth, kitsch, electricity, attitude, eccentricity and craziness. 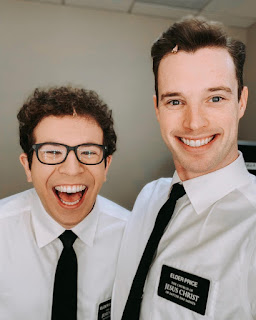 The two-act musical stars Liam Tobin as Elder Price, Jordan Matthew Brown as  Elder Cunningham, Alyah Chanelle Scott as Nabulungi, Andew Huntington Jones as Elder McKinley and Jacques C. Smith as Malfala. Everyone is suitably cast for their musical comedy roles, which they deliver most engagingly using the right mindset for lampooning, coupled with appropriate mischief, attitude, charm, angst, camp and hysteria. Vocally, they are in perfect unison, singing alone, in duets or with the ensemble, smartly mastering the melodic drive, pulse and heartbeat of the musical score. Vocal standouts include "I Believe," "Hello," "You and Me (But Mostly Me)," "Turn It Off," "Sal Tlay Ka Siti," "Joseph Smith American Moses" and "Hasa Diga Eebowai (Reprise)"

Big-hearted, well-intentioned and absolutely hysterical, "The Book of Mormon" is explicit, in-your-face fun that cheerfully reflects Broadway's golden age of musicals while satirically exposing the absurdities of the Mormon doctrines and its smiley-faced do-gooders. The hard-working cast is both accomplished and animated. The R-rated language is appropriately crazy. The songs are tremendous fun. And the dancing is done in such a clever good way, its bare-faced cheek and dazzle will send you out into the night thinking naughty thoughts about those door-to-door religious salesmen with gleaming teeth peddling Mormonism all across the USA anxious to recruit you and yours into their big money-making institution.

Posted by JimRuocco at 2:47 PM