From the Desk of Jim R, Take 2, Column 230, A Review: "Christmas on the Rocks" (TheaterWorks/Hartford) 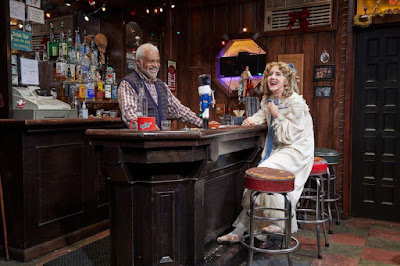 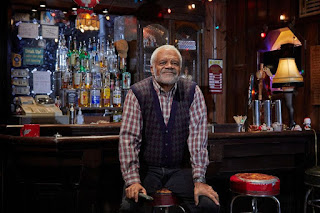 And so, it begins.
Again.

"A Christmas Story."
"It's a Wonderful Life"
"Rudolph the Red-Nosed Reindeer"
"Frosty the Snowman."
"A Christmas Carol"
"The Nutcracker"
"A Charlie Brown Christmas"

In "Christmas on the Rocks," a playful, addictive, wildly wicked holiday confection of seven different stories wrapped neatly in bright ribbons, glitter and shiny red, green and gold yuletide gift paper, theatergoers finally learn what actually happened to seven different child characters from their favorite Christmas stories, who, for story purposes, have now grown into adulthood and are completely messed up. 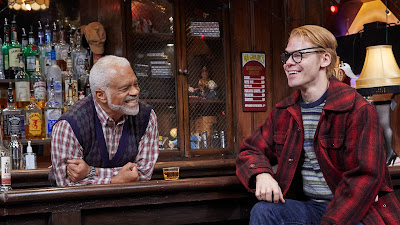 Then, there's "Rudolph the Red-Nosed Reindeer's" Hermey, that lovable gay elf from the North Pole who now finds pleasure and contentment from flying the rainbow flag proud and high and taking a wild ride on Rudolph's big, shiny bright nose. But sadly, he's also very, very jealous of that very famous reindeer.

Karen, the little girl from "Frosty the Snowman" who brought that famous icy wonder to life, is also beset by problems. Homicidal as hell because she never got any recognition or acclaim for her snowy white creation, she gets revenge by melting him into oblivion with her hot blow dryer and drinking up his watery remains when the police finally come calling. Drunken Tiny Tim from "A Christmas Carol" has become his own Ebenezer Scrooge, a man he believes, despite inspired visions from the Ghosts of Christmas Past, Present and Future, actually had a very real "psychotic break." 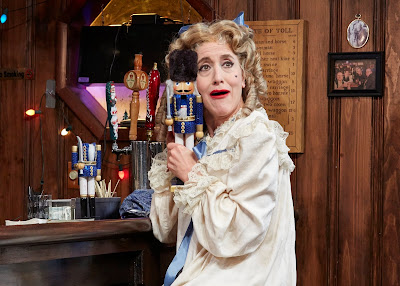 Clara, that beautiful young girl from "The Nutcracker," has not only lost her looks, but resembles Baby Jane Hudson from "Whatever Happened to Baby Jane?" That's not all. Her handsome Nutcracker Prince is having homosexual liaisons with her brother Fritz and loving every minute of it.
And finally, there's shy, perplexed Charlie Brown from the "Peanuts" stories who tells everyone that Snoopy, No. 4 has died,  Patty and Marcie have joined the lesbian movement,  Lucy is now his nagging wife and Schroeder is "straight" and not "homosexual." But wait, there's also good news. In "Merry Christmas, Blockhead," the final segment of "Christmas on the Rocks," he finally gets to dance and chat with that Little Red-Haired Girl who has remained in his everyday thoughts ever since the very first day he saw her in the school lunchroom. She too has crushed on him. Sweet! Oh, yes. 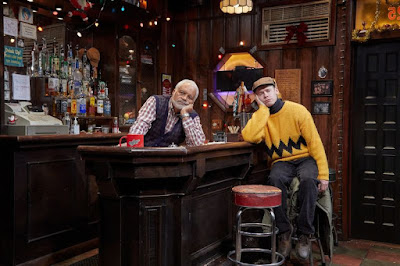 This encore presentation at Hartford's newly renovated TheaterWorks  dazzles, sparkles and cajoles with its decidedly quirky, offbeat, well-timed R-rated humor and irreverent scenarios provided by playwrights John Cariani, ("All Grown Up"), Jacques Lamarre ("A Miserable Life," "Merry Christmas, Blockhead"),  Jeffrey Hatcher ("Say It Glows"),  Theresa Rebeck ("God Bless Us, Everyone"), Edwin Sanchez  ("Still Nuts About Him")  and actors Jenn Harris and  Matthew Wilkas "My Name Is KAREN!"). It's all set in a local bar on Christmas Eve, but this time the man behind-the-bar is none other than "The Love Boat's" Ted Lange, who, for this go-round, is also renamed Isaac. And why not?  It's a great idea. It also gives the play a refreshing, feel-good honesty as each of the play's characters enter the bar, take a seat, introduce themselves to the understanding bartender on tap and get him up to speed on the do's, don'ts and mishaps in their lives. 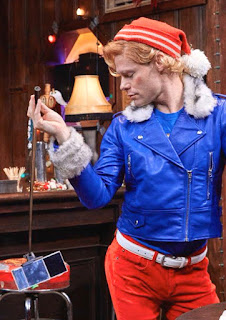 Rob Ruggiero, Artistic Director of TheaterWorks, is back in the director's chair for the seventh retelling of this off-the-cuff annual Christmas story. Staged with just the right amount of comic zing, snap and pulse, this edition of  "Christmas on the Rocks" never once loses its grasp on its acerbic storytelling, its offbeat craziness and dizzying conceit, its colorful characterizations, its cheeky dialogue, its nostalgic references to the actual movies and Christmas stories it parodies and its cheery yuletide giddyap. As director and storyteller, Ruggiero crafts a skillful, wonderfully inventive piece of theater that is fresh, alive and sparkly and guaranteed to release the juvenile giggler within. Even if you're seen the show before - lots of people in the audience have - there's still plenty to laugh about. Better yet, the play itself shows no sign of age or slowing down.

Nonetheless, Ruggiero is not one to rest on his laurels. With the casting of Ted Lange as the show's new bartender, Ruggiero had added some new dialogue to the piece with references to both "The Love Boat" and Lange's popular shipboard character. There's also some new staging, blocking and more face-to-face interaction with each of the characters and a sweet-and-sentimental nod to "The Love Boat" during the show's final moments that finds Lange dressed up in his "Love Boat" gear doing some very recognizable Isaac moves that fans of the actor and the long-running Aaron Spelling series will absolutely love. It all works perfectly within the context and framework of the "Christmas on the Rocks" story.

Putting Ted Lange front and center in "Christmas on the Rocks" and naming his character Isaac not only changes the actual playing ground for the 90-minute comedy but moves it in an entirely new direction. It's faster. It's funnier. It's different. He's also the real deal who just doesn't pour drinks, smile or listen casually to everyone who enters the bar tells him their troubles. Lange's Isaac is a compassionate, cynical and caring leader who steps out from behind-the-bar and offers the right kind of in-your-face honesty and emotion every bartender should have.
His line delivery is raw, honest and perfectly in sync with the irreverent humor inherent in every one of the comic scenarios. His comic expressions are timing are flawless. His interaction with both Harrison and Harris is believable, confident and well orchestrated. He has great fun with each of the play's seven different stories. He projects the warmth, vulnerability and persona at his character's core. He is the play's driving force and guiding principle. 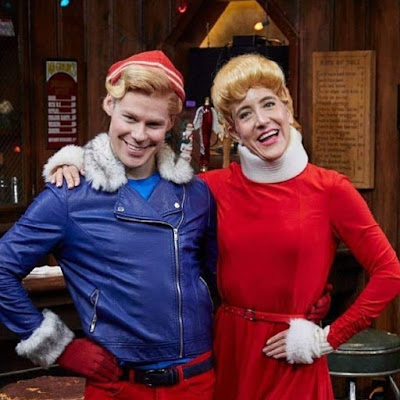 Returning to TheaterWorks for the second year in a role, Randy Harrison is a great ball of fire and energy completely at home with this type of off-the-wall humor and craziness. He is cute, cuddly, giddy, charming and full of wonderful surprise and merriment. He knows how to play comedy inside out, backwards and forwards, upside down and front and center. He can get, build and shape a laugh unobtrusively. The fact that you never can tell what he is going to do next - he has lots of tricks and surprises up his sleeve - adds pleasurable depth and resonance to his performance. He also brings his own sense of naughtiness and dare to the production, particularly when playing the very effeminate Hermey the elf with wicked, rainbow-high abandon. Playing opposite Lange, Harrison is much more grounded, livelier and funnier. He also handles Ruggiero's new direction and story arc tweaking with breezy charm, attitude and kick. 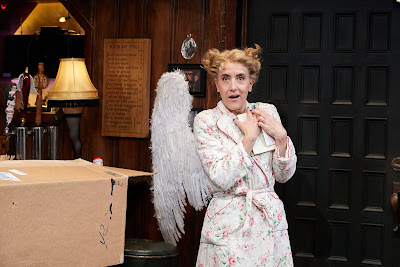 The wonderfully animated Jenn Harris, now in her seventh year with "Christmas On the Rocks," is an amazing actress and tremendously gifted comedienne whose line delivery, comic expressions, body language and reactions are so incredibly conceived and orchestrated, you laugh, cheer and applaud her every comic move. Like Harrison, she too is on fire to the point where you can't take your eyes off her for a moment for fear of missing something important. Her interaction with Lange in their individual scenes together is absolutely flawless and timed to perfection as is her sweet-tinged camaraderie with Harrison in the play's final scene, which also features Lange. This sort of comic domain is natural territory for Harris and she does it ever so well. Then and now, her performance in "Christmas on the Rocks" is fresh, uplifting, unique, genuine and always at the top of her game.

Surprising, hilarious, unpredictable  and contagiously gleeful, "Christmas on the Rocks" is a natural fit for TheaterWorks this holiday season. It is wild and wacky. It is deliciously obscene. It is refreshing and irreverent. It is flip and cheeky. It is chock full of wicked and crazy comic moments, dialogue and one liners that keep you laughing and laughing and laughing. The addition of "The Love Boat's" Ted Lange to the production as Isaac the bartender is a casting coup that gives this oft-revived comedy a welcomed shot of adrenaline. Under Rob Ruggiero's zany, inspired direction, the show never once misses a comic beat. Jenn Harris and Randy Harrison have never been better.
From start to finish, this celebrity stuffed comedy packs a flash-bang-wallop of non stop fun that relies on fantastic, offbeat humor and a bravura sense of confidence to pull things off. There isn't a Christmas show out there quite like it. And that alone is reason enough to put "Christmas on the Rocks" on your "things to do" list this holiday season. It's the real deal...and then some. 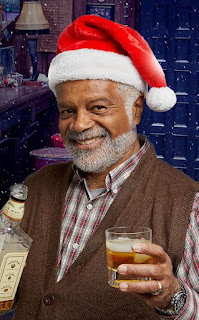 Photos of "Christmas on the Rocks" by Larry Nagler

Posted by JimRuocco at 1:01 AM