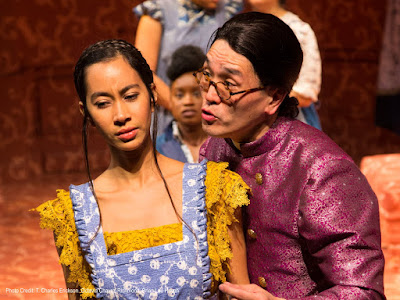 There are many ways to stage novelist Jane Austen's "Pride and Prejudice" without losing the richness of her writing, her carefully choreographed plot and her hugely entertaining views of the world, its people, its upward mobility and its absurdities.

In Long Wharf's brilliantly skewered interpretation, playwright Kate Hamill digs deep into the novel's very readable text and concocts a tale of great comic relief that pushes the boundaries of manners, marriage, education and morality in the most entertaining of ways. It's still the same story, but its crafted without the stiff, upper lip dramatics of a BBC One/PBS Masterpiece presentation or a  sprawling, atmospheric widescreen movie adaptation from the popular heyday of the Merchant-Ivory
filmmaking team. 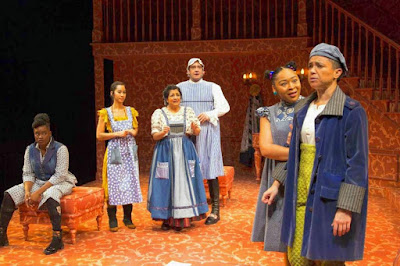 This nontraditional take on Jane Austen is decidedly wicked and gleefully oddball, reinforced by a joyride of ideas, jokes, scandals, proposals and cross-casting wildness that plays by its own set of rules.

High spirited and self confident.
Jaunty and lively.
Nutty and peculiar.
Poignant and priggish.

"Pride and Prejudice" is a laugh-a-minute triumph for Long Wharf.

Set in rural England during the early 19th century, the play centers on the themes and conflicts between marrying for love and marrying for economic reasons. For plot purposes, none of Mr. Bennet's daughters - Lizzy, Mary, Jane or Lydia - can inherit his estate so they are pressured by both he and Mrs. Bennet to marry well and find financial security in what is commonly known as "good marriages."
And so, the game begins. 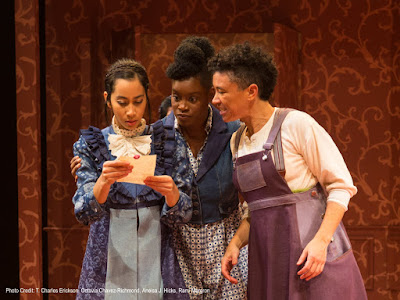 At Long Wharf,  "Pride and Prejudice" is being staged by Jess McLeod whose directorial credits include "Hamilton," "Hype Man," "Wolf Play," "Marry Me a Little" and "Season on the Line." In shaping Hamill's playtext for the stage, McLeod creates a lively atmosphere where private conversations, upper class exchanges, chance meetings and very British philosophies and dispositions are tossed and bandied about with outrageous and giddy abandonment. At the same time, nothing is out of place or shockingly tactless. As "Pride and Prejudice" evolves, McLeod giddyaps from one scene to the next with a vigorous, refreshing gait that is confident, inventive, apparent and knee-deep in panto-like assertiveness and melodrama.

Timing is everything here and McLeod balances humor and wit with dynamic, well-oiled flashes, flourishes, sweeping, sloping and expansive gestures that compliment the merriment and drawing room theatrics at hand. It's all very genuine, unexpectedly funny stuff that lives up to its potential and tears into the 1813 source material of Austen's legacy with a voice that is pulsating, snarky, devious, enlightening and magical. McLeod also marshals her eight-member cast swiftly and expertly through the play's fast-paced scene changes with nary a blip, halt or hiccup. It's Austen through and through played mainly for laughs, coasting effortlessly from Netherfield to Pemberly and back again. 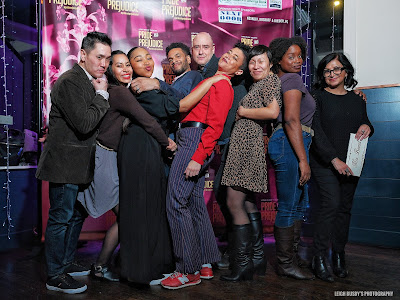 Everyone in the cast are tremendously gifted, talented performers whose charm, warmth, wit and knack for this type of full-tilt mayhem and craziness give the production its unifying lift, pulse, drive and fever-pitched adrenaline. Under McLeod's flavorful and fancy-free direction, each actor inhabits the role he or she is given with the right comic dash and flourish that serves the material well. Everyone understands his or her role inside out and all around. They are quick on their feet. They know how to play comedy and they play it well. They give the play's cross-casting conceit and cross-dressing merriment the creative aplomb it deserves. They have great onstage chemistry with one another. They know how to get a laugh without exposing the punchline. They can also shift gears in a millisecond whenever they are asked to change from man to woman or vice versa.

Silly, lightweight, witty and extremely likeable, Long Wharf's mounting of "Pride and Prejudice" breathes new life into Jane Austen's celebrated 19th century romance. It gallops and stirs. It delights and cajoles. It takes liberties with the actual story and gets away with it. Playwright Kate Hamill creates a madhouse of giddy romantic mayhem. Director Jess McLeod goes full-tilt in well-timed fashion. The entire cast has great fun with the insanely wacky material. And finally, every element works splendidly in this harmonious, liberating staging that conveys the age-old struggle between pride and love with such riotous exhilaration, it's impossible not to be moved by its social mayhem, its screwball indulgence and its gooseberry empowerment. 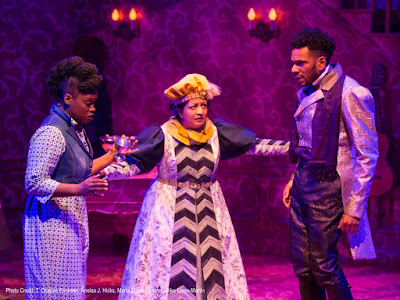 Photos of "Pride and Prejudice" courtesy of T. Charles Erickson