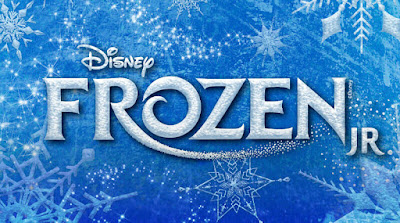 Brimming with infectious charm, winter-white enchantment and plummy abundance, "Frozen Jr.," presented by the Broadway Kids & Company School of Performing Arts, is a musical triumph of sorts that basks in the lyrical uplift of its story, its well-played familiarity, its catchy musical score, its colorful characters, its effortless grace and its very happy ending.

This production also benefits mightily from the school's clearly established range of talent and newcomers that come from kids and teenagers of all ages.

Ava Burrows, as Anna, brings a wide-eyed charm and innocence to the role of Anna that is confident, well-played and full of appropriate sparkle.

Carston Bakoledis, in the role of Olaf, is a wonderfully animated snowman.

Sebastian Martelle's Hans is a dashing Prince with a dark side. 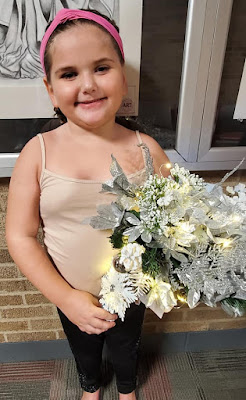 Making her stage debut as a member of the Summer Chorus, six-year-old Kayla Miller of Waterford sings, dances and performs with a natural effervescence and sweetness that makes her stand out whenever she's on stage.

Inspired by Hans Christian Anderson's "The Snow Queen," "Frozen JR.," written by Jennifer Lee, tells the inspirational tale of a determined princess (Anna) who sets off on a wintry journey alongside a rugged iceman (Kristoff), his loyal reindeer (Sven) and a cheery snowman (Olaf) to find her estranged sister (Elsa) whose icy, magical powers have inadvertently trapped their kingdom in an eternal winter.  Not to worry though. In true Disney fashion, the spell is broken, the ice melts, the sister's embrace and everyone lives happily every after.

Staging "Frozen JR.," director Kristin Burrows crafts a musical presentation that is lively, passionate and full of dash and imagination. As director, she is fully committed to the Nordic tone of the piece, its tongue-in-cheek humor, its energy, its accomplished presence and its comforting theatricality. She has great respect for the Disney material itself, its syncopated flourish and its established sense of wonderment, charm and fairy tale dimensionality. As "Frozen JR." evolves, the production is also awash with a feel-good radiance and joyful leap that remains consistent from start to finish. Burrows' directorial ingenuity is further embellished by her ability to craft a show that is very much in the moment in terms of performance, staging, blocking, scene changes, musicality and story arc alchemy and evolution. She doesn't waste a minute. She knows exactly how a scene or song is to be played, sung or acted. She takes chances and runs with them. She lets the material breathe, entice and resonate. She keeps the action flowing at breakneck speed. She gives the musical's fictionalized setting of Arendelle its specific atmospheric Nordic feel and 19th century authenticity. As choreographer (able dance assist is provided Hannah Burrows and Sarah Landolfi), she brings plenty of icy sparkle and adventurous spirit to the show's many dance  numbers, dispatching crisp, intricate moves and maneuvers that display clean lines, frosty detail and whimsical nuance. And even though these are just kids and teenagers, the sharp, demanding choreography she develops for "Frozen JR." is hardly kiddie or recital like. Instead, it is pretty amazing stuff that is effortlessly displayed and performed with brilliantined showmanship by everyone involved.

The musical score for "Frozen JR.," written by Kristen Anderson-Lopez and Robert Lopez, contains 18 songs pulled from both the 2013 animated film and the 2018 Broadway production. Many have been modified, reconfigured or re-orchestrated for the "JR." edition. They are "Let the Sun Shine In," "A Little Bit of You," "First Joik," "Do You Wanna Build A Snowman?" "For the First Time in Forever," "Dangerous to Dream," "Love Is an Open Door," "Reindeer (s) Are Better Than People," "You're Hired," "In Summer," "Hygge," "Let It Go," "For the First Time in Forever (Reprise)," "Mountain Fall," "Kristoff's Joik," "Fixer Upper," "Colder by the Minute," "Finale."

The songs themselves - catchy, character-defining, spunky, engaging, romantic, jubilant - are strategically placed throughout the production and primed with that earnest conviviality and sweet-tinged euphoria necessary for the musical to breathe, pulsate and take shape. Musical director Joni Gage gives the large "Frozen JR" cast the assurance and confidence they need to glide from one musical number to the next emphasizing the lyricism, the virtuosity and the complexity of the music. All of it is presented as polished as anyone could wish for with cast members of every age and size more than up to the challenge of making "Frozen JR." sing, glow and soar to the fullest. 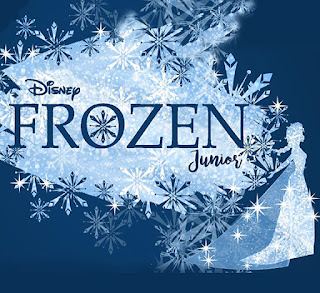 As Anna, Ava Burrows naturally conveys her character's sweetness, spunk and drive in lighthearted, endearing Disney fashion. She also is a wonderful singer who handles her many musical moments brightly, efficiently and emotionally. Shea Flaherty is the perfect fit for the part of Elsa. It's a role she inhabits with an icy coolness, strength and emotion. And when it comes time to sing her character's big number - "Let It Go"- she stands tall and proud letting you feel every moment of Elsa's accepted embracement of her very own magical powers. Sebastian Martelle portrays Prince Hans with the honesty, nobleness and romanticism the part demands. Much later, when his character is revealed to be deceptive, calculating and cruel, the actor plays Hans' villainy with wicked, twisted aplomb. Olaf, Sven and Kristoff, played respectively by Carston Bakoledis, Paige Walestra and Thomas Kelly, all have their individual moments which they play with life-sized animation, twinkle and freshness.

Technically, the sense of wonder that is "Frozen JR." comes from Burrows' handpicked design and backstage crew teams, all of whom play a part in the traditional and technical mechanics that keep the production up and running from act to act and scene to scene. From set crews and props crews to scene change crews and hair, makeup and costume crews, everything is expertly conceived and timed to reflect the Disney illusion and luster of "Frozen JR." with no halts, blips or lulls in the proceedings.

Taking its cue from the celebrated 2013 animated film of the same name, "Frozen JR." not only retains the magic and joy that made the film so popular, but comes gift wrapped with a groundbreaking cheer and Disney-like shine that makes it feel more magical, more mystical and more enchanting than ever before. Under Kristin Burrows heartfelt, uplifting direction, this tale of two sisters, both of whom are heroines in their own right, dazzles and cajoles with lots of vitality, imagination and well-positioned Nordic folklore and mythology. The costumes (design work provided by CC Curtiss, Patty Williams and the costume crew), lighting (designed by Matt Donnelly), sound (designed by Mike Gagnon) and sets heighten the story's allure. The entire cast - leads, supporting, chorus, ensemble - wonderfully reflect BKC's ongoing commitment to theatre, performance, expression and individuality. And that, in a nutshell, is why this production "let's it go" (no pun intended) with the sparkle, wit and icy skip and snap "Frozen" is famous for. 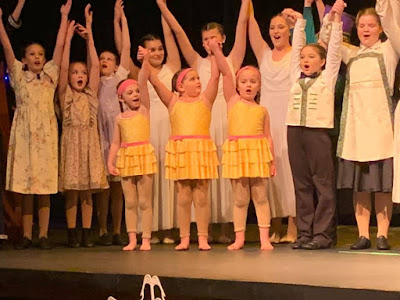 The Broadway Kids & Company School of Performing Arts production of "Frozen JR." was staged at St. Bernard School (1593 Norwich-New London Turnpike, Uncasville, CT) on December 14 and 15, 2019.
For more information about BKC or upcoming productions, call (860) 691-0060.
website: broadwaykidsandcompany.com
Posted by JimRuocco at 11:13 AM