From the Desk of Jim R, Take 2, Column 10, A Review: "Evil Dead: The Musical," presented by the Warner Stage Company 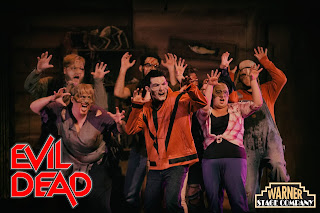 The plotline is simple enough: five college kids travel by car to a deserted cabin in the Tennessee woods (the owners are nowhere to be found) for a weekend of fun, uninhibited fucking, oral sex, booze, assorted games, mayhem and whatever else should cross their mind. Curiosity, of course, leads them to the basement where they find "Naturom Demonto," a very dusty, weathered copy of the Sumerian "Book of the Dead."
Naturally, they should run, but they don't. Instead, they listen to an old but engrossing audiotape by a very mad but dead professor that conjures up talking trees, talking moose heads, demons, spirits, zombies and other assorted wackos.
Before you can "American Horror Story" or Lady Gaga, one by one, the kids are turned into zombies (i.e., demonic possession)  amidst a plethora of violence, bloodshed, violence, bloodshed, violence, bloodshed...
Well, you get the picture.
Thus, unfolds "Evil Dead: The Musical," a madcap, exuberant retelling of Sam Raimi's '80's cult horror classic films, replete with an odd but justified musical score, buckets and buckets of stage blood, an enthusiastic cast of ten (an eleventh is regulated to audio only) and lots of hilarious Warner Theater kitsch to keep you deliriously entertained from the moment the houselights dim till the show's over and it's it's time to go home. 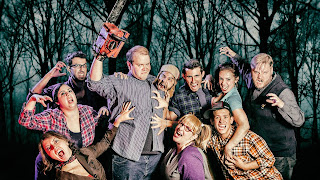 To direct "Evil Dead: the Musical," the Warner Stage Company enlisted the tremendously talented Keith Paul whose directorial credits include "Reefer Madness," "Lost in Yonkers," "Runaways" and "James and the Giant Peach." Staging a B-movie horror spoof  is no easy task, but Paul, pulls it off magnificently. He has as much fun directing the production as we do watching it. And since this is a spoof with a capital S, the dialogue, the lyrics, the gore, the physical gags, the stage blocking, the shocks, the sexual perversity, the lighting mishaps, the jolts and the screams and purposely and effectively played over-the top times ten.
And therein, lies the fun of "Evil Dead: the Musical." 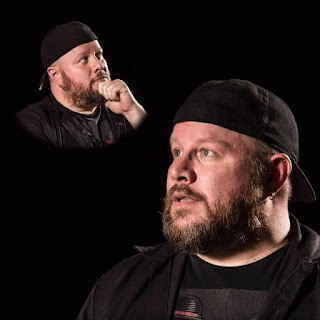 As with other horror musicals of this genre, including "Re-Animator: The Musical," this production houses its very own "Splatter Zone" (the first seven or eight rows) for those theatergoers anxious to get sprayed in the face (or all over their body) with lots of colorful red stage blood that could shoot out at you at any given moment in the story. 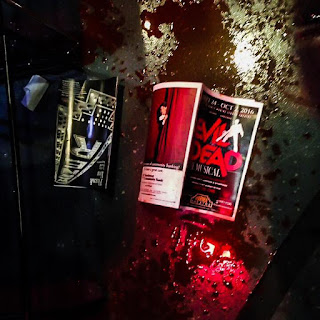 But not to worry.
Those willing to take the "Evil Dead" plunge sign waivers before the performance and are given clear plastic poncho-sized raincoats to keep them protected. Really? Yes, really.
But do these diehard horror really want protection?
Hell, no!
As more and more of the stage characters met their untimely doom (there's more than just five) audience members at Saturday's opening night performance, actually went ape, begging, screaming and crying for more BLOOD, which, when you think about it, is exactly why this select group of horror fans, Halloween-dressed groupies and aliens (I did see a space ship hovering above the Warner Theater before and after the performance) chose to sit in the "Splatter Zone."
And the cast, in turn, are only too happy to oblige, making sure the "Splatter Zone" crowd gets their fair share of blood. 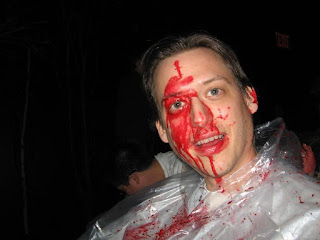 "Evil Dead: The Musical" stars Josh Newey as Ash, Jenna L. Morin as Cheryl, Cole Sutton as Scott, Olivia Hoffman as Annie, Shelby Raye as Linda, Ruben Soto as Jake, Caitlin Barra as Shelly, Daniel R. Willey as Ed, Jake Finch as Fake Shemp and Bryce Chamberlain as Moose and the Spirit of Knoby.
With Paul at the helm, every one of them performs with gleeful abandon and enjoys his or her moment in the spotlight. They never make a mistake. They clearly understand the show's deadpan camp. And it's B-movie gags, clichés and magnified fright and bloodshed. 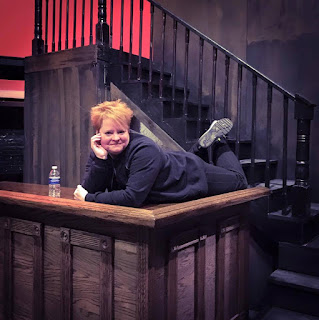 Choreography for "Evil Dead: the Musical" has been envisioned by the award-winning director/choreographer Sharon A. Wilcox whose theatrical credits include "Rock of Ages," "Rent," "Pippin," "Hair" and "Ragtime." A true visionary who completely understands and connects with the material at hand, she once again creates stage magic with "Dead's" big ensemble musical numbers "Do the Necronomicon" and "Blow that Bitch Away." In typical B-movie fashion, she pulls out all the stops as the cast cuts loose with some pretty intricate, well-orchestrated footwork that actually makes you want to jump up out of your seat and join in. 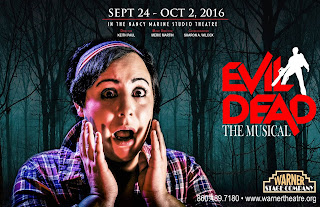 Lastly, there's the musical score (Meric Martin serves a musical director), which, to its credit, is serviceable to the plotline and its glorified B-movie camp, and nothing more. There's nothing remotely hummable about it, but then again, this isn't Sondheim, Webber & Rice or Cole Porter. It's "Evil Dead: the Musical."  Nonetheless, I did find "What the Fuck Was That?" completely amusing. So much so, I found myself singing the lyrics long after the show ended and on the ride home. Oddly, there was not a zombie in sight.