From the Desk of Jim R, Take 2, Column 250, A Review: "This Property is Condemned" (Connecticut Repertory Theatre) 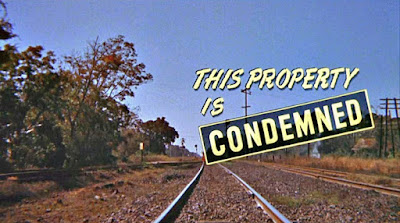 One of Tennessee Williams most famous one acts, "This Property is Condemned" charts the conversational interplay between 13-year-old Willie, a young Southern girl living at a condemned Mississippi boarding house and 16-year-old Tom, a teenaged boy who stumbles upon Willie one afternoon on the town's railroad tracks as she tries to balance herself decidedly from the water tower starting point to a finishing locale without falling or losing her control.

"The principal used to say there must've been something wrong with my home atmosphere because of the fact that we took in railroad men an' some of 'em slept with my sister Alva," she tells him. "She was 'The Main Attraction.' But the house is sure empty now. I'm not supposed to be there but I am. The property is condemned but there's nothing wrong with it."

Unlike the 1966 film version, which starred Natalie Wood, Robert Redford, Kate Reid, Mary Badham and Jon Provost - reworked for a near two-hour format which the playwright loathed - the stage play contains only two characters - Willie and Tom. The others are talked about at length, which, if you've seen the film, spark interest and memory and heighten the actual story as scripted by Williams. If not, the plot line still intrigues as does the ongoing banter between the two teenagers orchestrated with nuance, character and compassion by the playwright.

In terms of casting, "This Property is Condemned" works especially well if Willie and Tom are played by actual teenagers. The Connecticut Repertory Theatre revival of the play abandons this rule of thumb using actors in their 20's, both of whom are Asian. It's a casting conceit that breaks with tradition but nonetheless, keeps the material fresh and exciting, even though it takes some getting used to at the very start of the play. 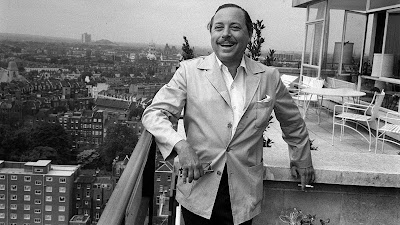 As storyteller, Williams portrays real characters in real situations. The structure and story arcs are clean, direct and specific, thus, setting the mood, atmosphere and style of the piece for interpretation. "This Property is Condemned" contains lots of quotable dialogue and conversation that is beneficial to the advancement of the story and especially easy to visualize, a factor that heightens the drama at hand. The emotional attachment he creates is filled with metaphors, references and irony, similar to that of his other plays. Combined with just the right amount of pathos and compassion, "This Property is Condemned" skillfully exposes the harsh realities of life, its heartaches and its subsequent desires.

Staging "This Property is Condemned" falls into the more than capable hands of director Dexter Singleton whose CRT credits include the recent "Talk to Me Like the Rain and Let Me Listen" and the upcoming "And Tell Sad Stories of the Death of Queens." Using the Zoom process to full effect, the edits, close ups, split screens and full screens are definitive and resourceful. It's all very carefully thought out under Singleton's directorial hand unfolding with the pace, desire and quickness intended by the playwright.

The performances are fluid, driven and intense.
In the role of Willie, Katelyn Trieu delivers a focused, relevant performance. Though she is hardly thirteen, she gives the play a modernity, meshed with connection, engagement and cautiously regulated charm. As Tom, Andre Chan brings strength and complexity to the part. He works especially well opposite Trieu and evokes the right kind of spirit and kindness that benefits the material on all levels.

A fine achievement for Connecticut Repertory Theatre, "This Property is Condemned" exposes the flat-out truths of the playwright's writing, its flippancy, its conventional vitality and its beautifully crafted sensibility. Director Dexter Singleton deftly lays out the hyperkinetic pulse and reality of the piece and keeps at-home viewers thoroughly engaged for a full 25 minutes. The contributions here, set forth by all involved, make CRT's trilogy of one-acts, well worth the visit in these very troubled, uncertain times. 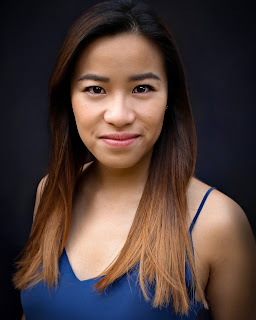 Connecticut Repertory Theatre's production of "This Property is Condemned" is being streamed online, now through March 21. Performances are 2 and 8 p.m. March 20 and 2 p.m. March 21. Tickets are $5. Event link and password will be emailed to you prior to the virtual performance. The box office is open 1 hr. prior to start of production. For additional information. call (860) 486-2113.

(This production is dedicated to the victims of the Atlanta, Georgia shootings)