From the Desk of Jim R, Take 2, Column 52, A Review: "Steel Magnolias" (Playhouse on Park) 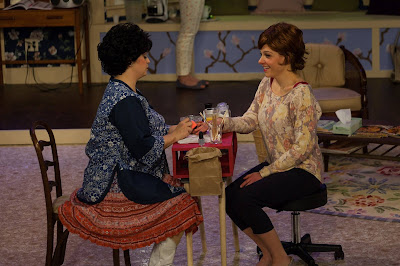 First performed off-Broadway in 1987, but best known as the 1989 film that starred Dolly Parton, Sally Field, Julia Roberts and Shirley MacLaine, Robert Harling's "Steel Magnolias" was based, in part on real-life incidents from the playwright's own life.
If you've seen the film or the play before, then, of course, you know what happens. But for those of you who haven't, a lot happens, both good and bad, to this particular group of female friends inside Truvy's, a cozy beauty parlor where everyone's words and personal conversations set the mood for what follows, both on stage and off.
This bright, breezy and very welcoming Louisiana hair salon is the main setting for Harling's sparkling, poignant comedy drama, which is lovingly and truthfully brought to life in Playhouse on Park's first production of 2018.
It sparkles.
It dances.
It delights.
It enlightens. 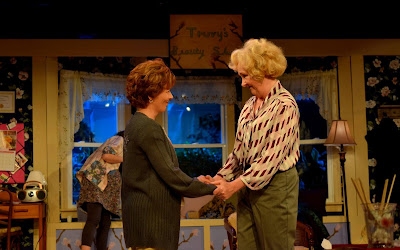 It celebrates womanhood, the stories of womanhood and the heartaches of womanhood with  marvelous splashes of peach, pink and magnolia. Plus a fair amount of glitter, dazzle and plenty and plenty of hairspray.
It also affords every "Steel Magnolias" actress the opportunity to shine on every level, not just in the freshness and vivacity of the material, but in the characters themselves.

In Harling's eyes, all six are bright, colorful, exciting, important women with plenty of baggage, history, back story, quirks, ticks, beliefs and oh, yes, sass. They also revel in back talk, cheeky one-liners and loud, character-driven pronouncements that thrust you head first into their story.

Then again, that's the point of "Steel Magnolias."

All of this is given a rich, deeply textured life here, as shaped and molded by director Susan Haefner.  As "Steel Magnolias" evolves from scene to scene, emotion to emotion, the audience is privy to a production that is deeply naturalistic, achingly real and feelingly enacted by its choice, glorious, hand-picked cast.

Given the fact that "Steel Magnolias" has only six central characters, in terms of stage blocking and movement, Haefner always knows exactly what buttons to push. In the hands of someone less experienced, the play could have gone the paint-by-numbers approach, using simple, ABC "been done to death" blocking, which, of course, would have been a cop out for both actor and audience.

Not, Haefner.
Her approach is vivid, cinematic and three dimensional. Whether there are two people on stage or four or six, Harling's story of "Steel Magnolias" is touchingly, comically and tenderly observed and played with a spirit of pathos, comedy, sadness and open-hearted honesty under Haefner's remarkable tutelage and direction. 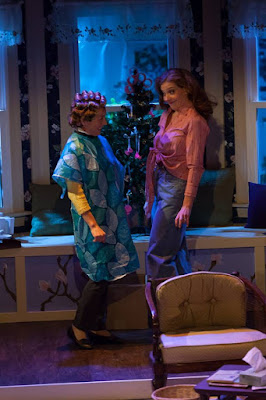 The wrapping of a Christmas present, the cutting and styling of hair, a quiet observation or expression, a hug, a cry or sigh of relief, a sudden outburst, a remembrance, a reflection....all of this (and more) heightens the entire, emotional "Steel Magnolias" experience.

As actress herself, Haefner completely understands the complete stage process from first read through and rehearsal to previews, opening night and the subsequent performance run right up to the closing night performance. She knows how actors think and behave. She know how to let them build and develop characterization. She knows when to let them explore and improvise. And finally, how to produce a terrific work as dictated by the playwright that remains front and center.

The casting is perfect.
All six actresses work splendidly together, individually, in pairs and as a unified ensemble. They connect with the story, their particular character and their role in the progression of the story every single second they have on stage. 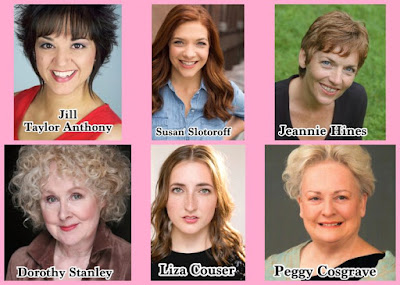 What's remarkable about this all-female cast is not anything of what they say or do looks rehearsed on staged. Yes, they are all actresses playing parts. Yes, they know their dialogue and stage blocking inside out. Yes, they know the sound and light cues. Yes, they know how each scene, each exchange and how each act will play out before the final curtain.
But their connection to "Steel Magnolias" is so real and so genuine, you never once feel as if you are watching a play. Instead, you watch, observe and connect as if you are the seventh person in their story.

You are refreshing.
You are original.
You are impressive.
You are unique. 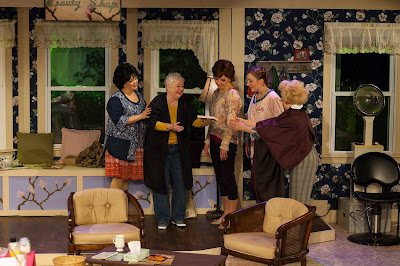 Vivid, exciting and extremely well done, "Steel Magnolias" offers theatergoers a healthy batch of female conversation, gossip and banter about life, death, marriage, sex, divorce, friendship, birth, money, recipes, men and sudden, unexpected twists of fate. It is fast. It is funny. It is sad. It is wonderful. It is astonishing. It also unfolds with an organic vitality and pulse that is rare in theater, nowadays.

Posted by JimRuocco at 6:45 AM