From the Desk of Jim R, Take 2, Column 208, A Review: "Billy Elliot: The Musical (Goodspeed Musicals) 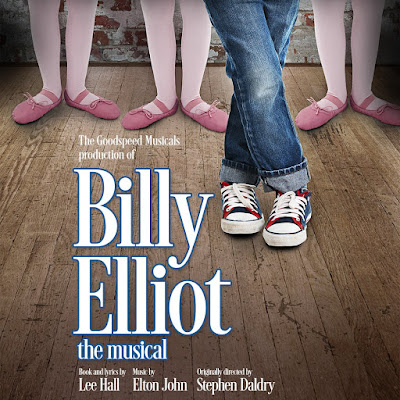 In the northeast mining community of County Durham, circa 1984, working-class society is crumbling at the hands of Margaret Thatcher's destructive government while at the same time, a young boy discovers artistic self-expression, quite accidentally, through dance.

Spectacular, visceral, bold and brash, this is an amazing piece of musical theatre, chock full of boundary-pushing information, depth, fantasy and stagecraft that overflows into something quite triumphant and remarkable. More importantly, it supports artistic freedom in the arts, it practiced equality, the camaraderie of dancing and its intensives and oh yes, the increased confidence that boys can dance too and they do it ever so well. Here, the discovery of one's talent is what's important. Anyone who has a problem with that, is advised to stay home. 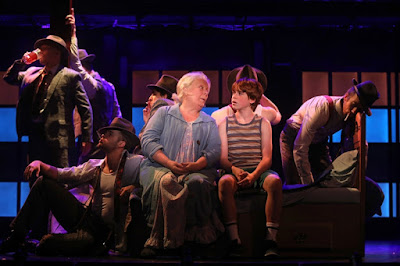 At Goodspeed, "Billy Elliot: The Musical" is being staged by internationally renowned director Gabriel Barre whose credits include "Sweeney Todd," "Camille Claudel," "Private Lives," "John & Jen," "Hair" and "The Scarlet Pimpernel." As with other musicals and plays he has directed, there is a rawness, soulfulness and warm humanity here that gives the story a real, spontaneous feel and passion that keeps it grounded, truthful, graceful and emotionally expressive. Barre's production also pays close attention to the period in which the musical is set, the people who populate the coal-mining town of County Durham, their raw energy, their solidarity, resentment and defiance, their stubborn and one-sided mindset and their fight for survival amidst the heated Thatcher government that threatens their very existence.

At the center, of course, is the story of young Billy Elliot, his mourning for his mother who died two years before the musical begins, his relationship with his oppressively male-dominated family and finally, his discovery of dance - i.e., ballet- and its many possibilities. As director and storyteller, Barre shapes Lee Hall's well-honed script imaginatively and sensitively with wonderfully sketched and played tenderness and affection. He also never allows the show's pacy musicality to sidetrack the emotional resonance of Billy's personal struggle, his hopes and dreams and his ongoing fight to overcome impossible odds and become a respected ballet dancer with the full support of his not so terribly encouraging family. 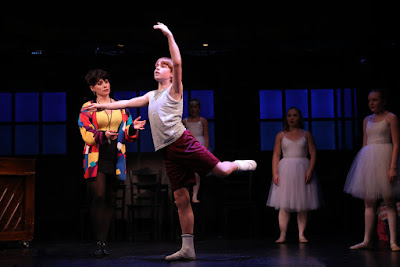 Pacing is everything in this invigorating telling and Barre doesn't waste a single moment. The individual stories and the emotions expressed by every one of the characters is calibrated brilliantly with a page-turning power and balance that keeps the production airborne with nary a glitch, a hiccup, a halt or a stumble. From rehearsal hall to stage, Barre's determined vision not only reflects the well-intentioned conceit of the show's originator's, but cements the liberal humanity of the play text, its exhilarating simplicity and its triumph-over-adversity machinations most engagingly.

Written by Elton John (music) and Lee Hall (lyrics), the musical score for "Billy Elliot: The Musical" features 16 individual musical numbers. They are "The Stars Look Down," "Shine," "Grandma's Song," "Solidarity," "Expressing Yourself," "The Letter (Mum's Letter)," "We Were Born to Boogie," "Angry Dance," "Merry Christmas, Maggie Thatcher," "Deep Into the Ground," "Dream Ballet/Swan Lake," "He Could Be a Star," "Electricity," "Once We Were Kings," "The Letter (Billy's Reply) (Reprise)" and "Finale." Emotional, endearing, plot moving and character driven, the songs themselves take inspiration from the British working class of the 1980's and dutifully reflect the tensions, frustrations and observations of the times and the County Durham populace.

John and Hall also include underlying themes that tap into the title character's discovery, chase and pursuit of balletic dance along with chants, rhythms and percussion's that communicate the inspirational message of the musical -  acceptance, open-mindedness, the embracement of individuality, the stamping out of homophobic prejudice and standing tall in the face of adversity. This process, both collective and immersive, adds resonance and purpose to the story, punctuated by intimate bits of pathos and humor the characters project through choral sounds and climatic moments that define the "Billy Elliot" experience. 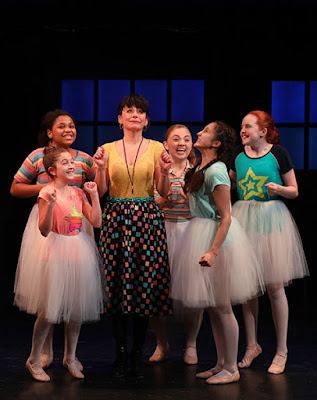 Serving as musical director is Michael O' Flaherty, a celebrated, award-winning musician whose Goodspeed credits include "Oliver!" "The Drowsy Chaperone," "The Music Man," "Big River," "1776," "Bye, Bye Birdie," "The Most Happy Fella," "Me and My Girl," "The Pajama Game" and "Sweeney Todd," among others. Now in his 28th year at the Goodspeed, he brings the right flair and precision to "Billy Elliot: The Musical" along with an energy and form that is persuasive, inspired and true to the production's fully committed, fully disciplined high musical standards.

Under his tutelage, every one of the songs is completely realized, envisioned and performed to let you see and hear it all the more clearly. Working alongside his handpicked, exceptional orchestral team (William J. Thomas (keyboard), Sal Ranniello (percussion), David Kidwell (keyboard II), Pete Roe (trumpet), Matthew Russo (trombone),  Liz Baker Smith (reed),  Mickey Schuster (reed II), Nick DiFabio (guitar),  O'Flaherty always knows what buttons to push, how to let an important element of the score linger, when to amp things up and when to take a breath, a pause or a break. As "Billy Elliot: The Musical" evolves, he draws upon his own musical knowledge and experience to recreate the authority and vibrance envisioned by the show's originators with the able assist of his band who bring the required charm, spirit and drama to the piece.

Dance being a key element in "Billy Elliot: The Musical," Goodspeed has enlisted Marc Kimelman to choreograph the show's key dance moments, which range from awkward and gawky to eventful, exciting and completely passionate. Kimelman immediately connects the story elements at hand and creates many moments to savor including Billy's colorful, breakout "Angry Dance" and the imagined "Dream Ballet/Swan Lake" ballet where the title character dances with his older self. What stands out most here is Kimelman's unbridled confidence, his impeccable speed and timing and the way he mounts each of the dance numbers in terms of expression, polish and advancement. In every respect, he understands the artistic parameters of the production's dance blueprint from end-to-end and makes inspired choices of accomplished partnering, all of which are delivered superbly and engagingly. 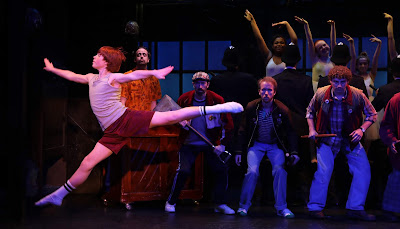 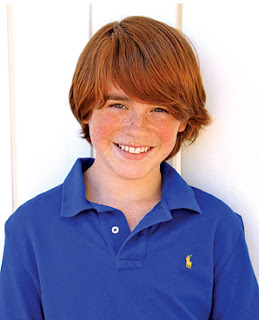 The casting of Liam Vincent Hutt as Billy Elliot is a major tour-de-force that not only thrusts him front and center as he is in almost nearly every scene, but allows him to display his natural talent with the thrill, dazzle, charm and charisma the character of Billy is meant to have. He's articulate. He's focused. He's innocent. He's confident. He's curious. He's intuitive. He's sensitive. He just doesn't play Billy. He is Billy. It's the performance of the year and one that lets Hutt shine as a performer, singer, dancer and gymnast without ever missing a single beat, skip, leap or turn.
As the musical moves from scene to scene and act to act, the actor superbly captures the character's transition from klutzy dance beginner to graceful, seasoned pro along with his fight for freedom and expression amidst the tension, frustration and conflict that gives the musical its drive. His Geordie accent, skillfully developed under the tutelage of dialect coach Jennifer Scapetis-Tycer (she also works wonders with the entire "Billy Elliot" cast), reflects the character's northeast upbringing. And finally, Hutt is very much in the moment, making every he does real, raw and natural.

Making his Goodspeed debut, Sean Hayden aptly portrays the angst-ridden troubles and concerns of Billy's dad Jackie as he copes with the loss of his wife, the prolonged miner's strike and the fact that his son has taken an interest in balletic dance, which he feels is a recreation for just girls and poofs. It's a performance fraught with real honesty, depth and emotion. As Tony, Billy's older brother, Gabriel Sidney Brown vividly crafts a portrait of a reckless young man committed to the cause, but filled with anger and uncertainty. Jon Martens, in the role of Billy's best friend Michael, offers a genuine, endearing performance as a young lad who loves dressing up in women's clothes and find himself attracted to Billy. It's a character turn that comes from the heart and one that Martens plays with gleeful, wicked abandon. His big song-and-dance number "Expressing Yourself," performed with Billy and the Ballet Girls, is a genuine showstopper. 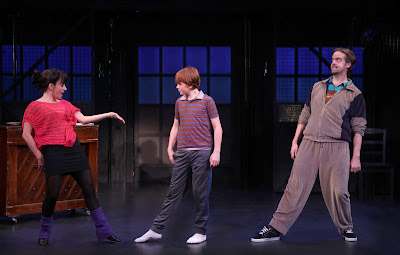 As Mrs. Wilkinson, the dance teacher who recognizes Billy's raw talent, Michelle Aravena delivers an intelligent, confident turn that is fresh, amiable and entirely in sync with Lee Hall's vision of this important character. Grandma, as played by very charismatic Barbara Marineau, is accomplished, personal and likeable. Her motherly concern is assuredly rendered and kept within bounds, which makes her portrayal always a pleasure to watch whenever shes on stage. As Mrs. Wilkinson's daughter Debbie, the young girl who completely crushes on Billy, Erika Parks is animated, exhilarating, teasing and very much a stand-out performer due to her natural ability to emphasize the humor, energy and feisty spirit embedded in the role. Her keen comic sense is priceless.

Bold, big-hearted, imaginative and truthful, "Billy Elliot: The Musical" stands tall and proud at the Goodspeed. It is brilliant and daring. It is funny and poignant. It is passionate and deeply affecting. It is also blessed with a refreshing, sincere talented cast, headed by Liam Vincent Hutt, an amazing 13-year-old performer, who, in the title role, crafts one of the most realistic portraits of a young boy who refuses to give up his fight for artistic freedom and expression with the same conviction and kick that Jamie Bell brought to the original 2000 film version. Like Bell, Hutt takes that same leap, radiating pride, awe and yearning from his every single pore. 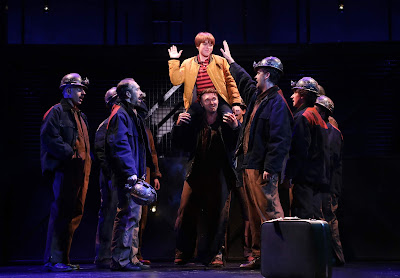 Photos of "Billy Eliot: The Musical" courtesy of Diane Sobolewski

Posted by JimRuocco at 9:46 PM