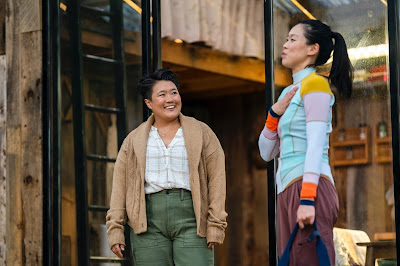 Amy Berryman's debut play "Walden" is set sometime in the near future (the time and date are never mentioned) in a cabin in the woods surrounded by vegetable gardens, grass, tree stumps, gravel roads and lots and lots of woods.
It's a natural, comforting habitat in a world where a tsunami in Sri Lanka has wiped out millions of people, astronauts are just returning to earth after spending a year on the moon and living on Mars could actually become a reality.

As playwright, Berryman's work is chock full of ideas, conversations, conflicts, dreams and theories which, in turn, make it completely fascinating. And yes, there's a lot going on but "Walden's" strength comes from its complexity and page-turning excitement, a fact that thrusts the piece into the spotlight and forces you to listen to its many arguments, developments, debates, conclusions and ever-changing mood swings.

There's talk about the environment, space, NASA, colonization, climate refugees, sibling rivalry, isolation, habitation, jealousy, job security, loneliness, etc. But it's all carefully placed, timed and delivered so that it resonates without any form of hesitation or confusion. As "Walden" moves from scene to scene without any intermission, the dialogue is vital, natural and imaginative. That coupled with the play's fully realized outdoor setting (impeccably designed by You-Shin Chen) allows a theatrical immersion between actor and audience that gives the production - LIVE or streamed - additional weight and substance. It's a factor that contributes greatly to the play's actual enjoyment. 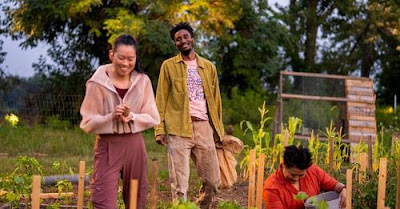 Backed by Hao Bai's atmospheric sound design and Jeanette Oi-Suk Yew's choice lighting design, the TheaterWorks production of "Walden" unfolds with a dramatic momentum and curiosity that is rich in both purpose and influence. It keeps you attentive. It keeps you guessing. It toys with your senses. It catches you off guard. It pushes you to the edge of your seat. It leaves you bewildered. It also touches upon several subjects that hit very close to home.

Staging "Walden" director Mei Ann Teo tackles Berryman's play script head on, thus, creating an important drama that is open, creative and theatrical with rewards aplenty for the on-stage actors, the LIVE audience and if you stream, the at-home viewer as well. As director, she knows what she wants and she runs with it. She takes chances. She know how to frame a scene, develop it, when to pause, when to change moods, how to move the actors unobtrusively about Chen's outdoor setting and when to shock or surprise her audience. The fact that you never know exactly how things will play out and how they will actually conclude over the course of the play's 100 minutes works to "Walden's" advantage.

For example, what really made Stella quit NASA (she was an architect who designed the Walden habitat) and take a meaningless job in a local bar? Why did Cassie, her fraternal twin take a different path in life? Why are the two sisters at odds with one other? Why did Bryan become an Earth Activist convinced that space colonization is wrong? Will Cassie actually travel to Mars to live out her life with twenty other individuals from the NASA program?
The result of these and other questions is played out with an extreme sense of urgency and believability under Teo's watchful eye. The topics, no matter how big or strangely conceptual, fuel "Walden" with proper agility and excitement as it inches toward its encouraging conclusion. 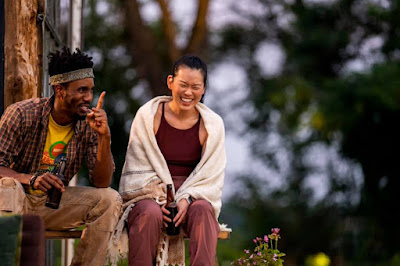 "Walden" stars Diana Oh as Stella, Jeena Yi as Cassie and Gabriel Brown as Bryan. In the role of Stella, a woman who has given up her dreams and career for a simple life with her fiancee at their wooded homestead, Oh communicates her character's joy, hurt, bitter resentments and pain with a deft watchfulness and emotion that complements Berryman's artistic and visionary conceit. As Cassie, Yi is both natural and argumentative as she finds her self at odds with both Stella and career choices that can and will change her life forever. It's an emotionally charged performance that the actress delivers with the creative mindset envisioned by the playwright. Brown's portrayal of Bryan is honest, playful and intriguing. As climate activist, his belief in saving the planet from ultimate destruction rings loud and clear.

A well-intentioned, satisfying effort, "Walden" is a tight and clever three-character play brimming with a confidence and skill that feels both human and universal. It's an inspiring turn for TheaterWorks and one that director Mei Ann Teo delivers with kind of depth and passion that makes it stand tall on its own two feet. LIVE or streamed, it is an important work of theatre that demands to be seen, appreciated and enjoyed. 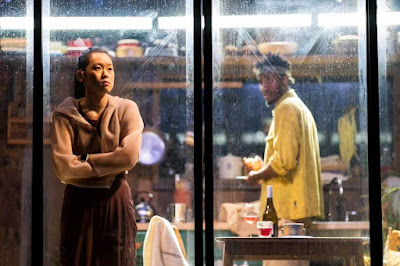 Photos by Chris Capezziello
Walden" is being staged by TheaterWorks (233 Pearl Street, Hartford, CT), now through August 29. It can we seen LIVE in the great outdoors at 100 RiverFront Recapture, Windsor, CT or streamed online. For tickets and more information, call (860) 527-7838.
website: twhartford.org

Posted by JimRuocco at 4:33 AM