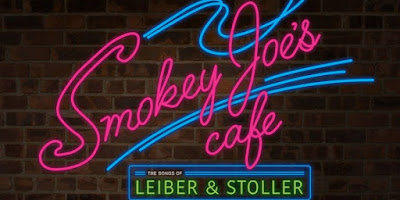 In an idealized, nostalgic setting "Smokey Joe's Cafe" - a celebratory look back at the classic pop music of Leiber and Stoller - spins slice-of-life anthems and ballads into exciting tales of life, love, loss, desire and attitude in the most imaginative of ways.

It snaps and pops.
It amplifies the beat and mood from whence it came.
Its got feel.
Its got game.
Its got pulse.
It sparks the heart.
It seductively acknowledges sexual attraction.
It sings.
It dances.
It gets the pulses racing.
It transports you to a time and place of another decade.
It recognizes the wit and imagination of its creators with both confidence and vitality.
More than just a trip down memory lane, "Smokey Joe's Cafe" is a great introduction to ACT of Connecticut's exciting 2021-2022 season which includes Bryan Perri's "Unplugged," "Nickel Mines," "Jesus Christ Superstar" and Jonathan Larson's Tony award-winning musical "Rent." It is also the first LIVE musical to be staged at this venue since the pandemic struck. And what a welcome back, it is. 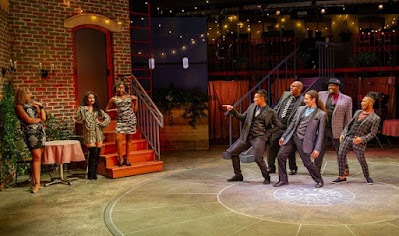 Told entirely through song - there is no story, theme, plot or connection - its theatrical platform is further enhanced by an exceptional design team that includes Jack Mehler (sets and lighting), John Salutz (sound) and Claudia Stefany (costumes). All three work wonderfully together with design work that is creative, individualistic, atmospheric and incredibly in sync with the sizzle, heat and pop nostalgia that is "Smokey Joe's Cafe."
To direct "Smokey Joe's Cafe" - and get it exactly right on all conceptual levels - directorial requirements mandate someone with a complete understanding of theatrical performance, actor-audience reciprocity and musical theatre as an art form. In Stephanie Pope Lofgren, a Broadway veteran whose New York/National Tour credits include "Pippin," "Chicago," "Fosse," "Kiss of the Spider Woman" and "Thoroughly Modern Millie," this revival is blessed with an dynamic auteur whose inspiration, creativity, knowledge and love for the subject matter is both extraordinary and virtuosic. It is exactly that kind of matter-of-factness and candour that turns this production and its labyrinthine musical trajectory into a veritable spectacle that shines, dazzles and delights.
As storyteller and orchestrator, she brings great dimension and scope to the piece using technique, style, description and an enriched canvas of thoughts and ideas that make their mark most engagingly. Nothing is out of place or out of sync during the musical's intermission-less 90 minutes. Its all been carefully blocked, rehearsed and staged seamlessly with no two scenes alike in terms of performance and musicality. Moreover, it never stops going. It moves from song to song and moment to moment assuredly, fashionably and wondrously. Lofgren wouldn't have it any other way. And that, in a nutshell, is exactly what puts her at the top of her game. 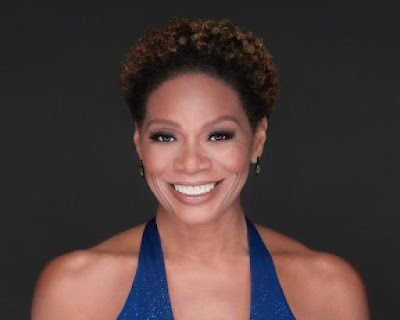 Doubling as choreographer for "Smokey Joe's Cafe," Lofgren  brings a wealth of experience and dash to the musical which, in turn, gives it plenty of heart, soul, passion and choreographic thrust. A dancer herself, she creates a fusion of styles, moods and movements that celebrate the art form and the actual period with an accomplished feel and exhilaration. She plays into the show's seriousness, humor and expression with a multitude of steps, patterns, movements, pairings and synchronization - all clearly and believably rooted in the technique of musical theatre and its satisfying realm.  Torsos twist. Hands pop. Arms move heavenward. Images reflect unity, beauty, love and loss. Dancers ignite into swirls of frenzy, passion, thrill and excitement. And lastly, the choices made by Lofgren illustrate the tradition, the conscience, the power and the musical heritage that is Leiber and Stoller, backed by singers and dancers who share her love of theatre, expression and live performance.
Thirty-six musical numbers comprise the Leiber and Stoller songbook utilized for this particular production. They are: "Neighborhood," "Youngblood," "Falling," "Ruby Baby," "Neighborhood (reprise)," "Keep on Rollin,' " "Kansas City,"  "Trouble," "Love Me/Don't," "Fools Fall in Love," "Poison Ivy," "Don Juan," "Keep Forgettin,' " "On Broadway," "DW Washburn," "Saved," "Yakety Yak," "Charlie Brown," "Smokey Joe's Cafe," "Loving You," "Pearl's a Singer," "Shimmy," "You're the Boss," "Treat Me Nice," "Hound Dog," "I'm a Woman," "There Goes My Baby," "Love Potion #9," "Jailhouse Rock," "Fools Fall in Love (reprise)," "Spanish Harlem," "I (Who Have Nothing)," "Neighborhood (reprise #2)," "Stand By Me," "On Broadway (bows)" and "Baby That's Rock and Roll." 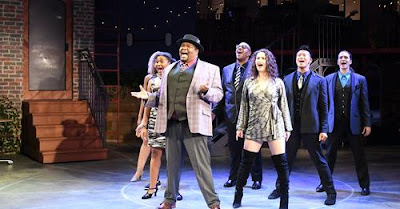 A first-class, talented musician, he knows exactly how to make every single pop, R&B and rock 'n roll song associated with "Smokey Joe's Cafe" resonate and fascinate with that intimate supper club magic that was prevalent in the 1950's and 1960's. As the production evolves, his approach to the music is fast, detailed, grounded and adventuresome. There's also a freshness to it all, complemented by choice orchestral ingredients that pinpoint different notes, styles, beats, rhythms, combinations and collisions. Here you get more than Broadway sonic pastiche. You get reinvention that is smart, clever and veritable.

At ACT of Connecticut, Bronston (at the piano, doubling as conductor) surrounds himself with the very talented orchestral team of Tom Cuffari (keyboard 2), Russ Nyberg (drums/percussion), Gary Blu (tenor/baritone saxophone), Al Orio (electric guitar), Kevin W. Callaghan (electric bass) and Dennis J. Arcano (music contractor/synthesizer programmer). Under his tutelage, the band address and play the popular musical score with just the right amount of effortless enthusiasm, emotion and humor the production calls for. Nothing is rushed or hurried.
Instead, the message is clear and beautifully contoured with addictive, vibrant accounts, observed variants, projected buzz  and carefully calibrated tonal stability. Things, of course, sizzle and pop as the cast of eight raise their voice in song never once missing a single beat, intention, harmony or rhythm associated with the the show's tangy musical songbook. It's all very, very beautiful, keen, engaged and ever-enthusiastic. 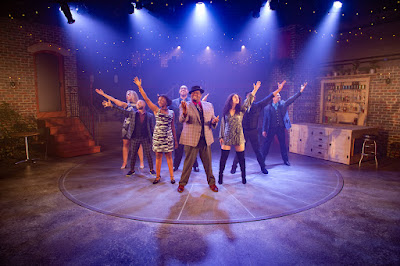 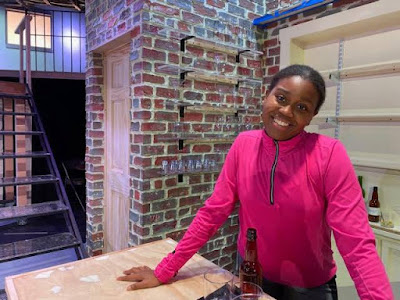 "Smokey Joe's Cafe" stars Courtney Long, Avionce Hoyles, Albert Guerzon, Keyonna Knight, Arnold Harper II, Jordan Fife Hunt, Kelly MacMillan and Juson Williams. As dictated by its creators, the show remains an eye-popping, exhilarating ensemble piece where each performer gets his or her place in the spotlight while embracing the music of Leiber and Stoller and illuminating the vocal brilliance and individuality of the musical score with beauty, style, class, compassion, humor and dignity.

There are star turns. There are showstoppers. There are laughs. There are tears. There are playful and sexy bits that get the pulses racing. Song by song and scene by scene, the cast are in full and fine voice that reflect and complement the conceit of the material, the musical story arc and its conjuring questions and answers. What's wonderful about this particular group of performers - all stars in their own right - is the depth and versatility they bring to every song they perform, their amazing range and control, their individual harmonizing, their continuity and how they wrap their voice around a lyric they want you to appreciate and understand. There's so much electricity here, the heat could easily cause or power outage or two.

An energetic and savvy tribute to one of America's most celebrated songwriting duos, "Smokey Joe's Cafe"  gigawatts lightning-fast ripples of mood, voice, pulse and excitement with nostalgic spectacle and thrilling momentum. It jumps. It pops. It sparkles. It sings. It dances.
Every one of the musical numbers shows Leiber and Stoller at their very best and the cast - all eight of them - go full-throttle as both singers and dancers - under Stephanie Pope Lofgren's inspired direction and emotionally shifting choreography. John Bronston's musical direction is both edgy and savvy and the band - absolutely sensational in their own right - never once misses a beat, which in a musical of this caliber, goes a very long way.

Now that Equity regional theatre is back with in-place protocols that include mandated vaccinated card check ins, the wearing of masks and social distancing, ACT of Connecticut remains a source of genuine inspiration and professionalism using the very best hand-picked actors, directors, choreographers and design teams.
With outstanding productions ranging from "Evita" and "Little Shop of Horrors" to "Working" and "The 25th Annual Putnam Spelling Bee," this Ridgefield-based venue, under the artistic guidance of Daniel C. Levine (Artistic Director) and Katie Diamond (Executive Director) maintains a creative vision like no other. The staff - front, in-house and volunteers - not only make everyone feel welcome, but are especially accommodating during these very different and troubled times. A standing ovation for for all. 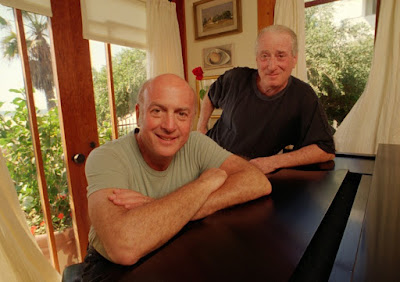