From the Desk of Jim R, Take 2, Column 273, A Review: "A Grand Night For Singing" (Goodspeed Musicals) 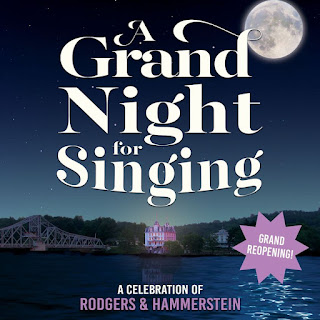 The concept is pretty simple.
A cast of five - two men, three women.
A trunk full of songs from Rodgers and Hammerstein.
Career highlights.
History.
Nostalgia.
A kiss.
A touch.
A smile.
A tear.
A dash of whimsy.
And oh yes, lots and lots of fairy dust.

When "A Grand Night For Singing" first opened on Broadway back in November, 1993 at the Criterion Center Stage Right, fellow cast members Martin Vidnovic, Victoria Clark, Jason Graae, Alyson Reed and Lynne Wintersteller took the stage to perform a light, breezy and sugar-coated musical revue tribute to the music of Rodgers and Hammerstein celebrating the duo's best known and not-so-known song hits.
It was cute. It was funny. It was sappy. It was entertaining.
And the cast of five - all accomplished Broadway singers and actors - put their best foot forward to serve up a main course of musical savoir faire that was often hard to resist. 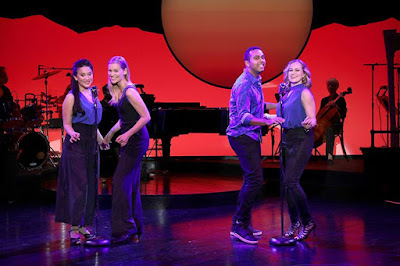 In 2021, "A Grand Night For Singing" has been given the green light to not only showcase the music of Rodgers and Hammerstein at Goodspeed Musicals, but finally open the venue's doors to the theatregoing public nineteen months after the COVID-19 pandemic shut everything down.

And what a celebration is is.

Very different from the original 1993 Broadway staging, this incarnation goes a completely different route by updating the material with a very unique and exciting twist to the storytelling and musicality that adds shading, color, nuance and dimension to what otherwise could have become just another musical revue that's fun and entertaining and very little else.

Putting Rob Ruggiero in the director's chair - he staged dark and tantalizing revival of Lionel Bart's "Oliver!" at the theater back in 2018 - is "spot on" because this is a man who likes to take chances, knock you on your ass, try something different, run through the starting gate at breakneck speed, turn things upside down, backwards and forward and end up creating something that pushes boundaries, breaks down doors, catches you off guard and doesn't always play by the rules.

He's the absolute best and that's why this revival of "A Grand Night For Singing" snaps, crackles and pops.

The mood and feel of this production, matched by a "time's have changed" conceit, gives this revival a deliciously flavorful spin that Ruggiero vamps with knockabout charm and exhilaration. As with "Oliver!," he sees things in a very different light, a directorial approach which works to his advantage in terms of production, concept, execution, style and performance. Here, gender, sexuality, lifestyle and choice are set in motion in very different ways. Men sing songs originally created by Rodgers and Hammerstein for women. Women, in turn, reenact songs created for men. But wait, there's more. 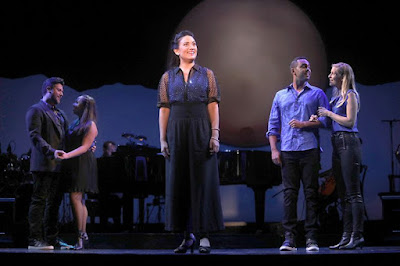 "We Kiss in a Shadow" from "The King and I" now unfolds with a lesbian twist that works most engagingly. Ado Annie's playful ditty "I Cain't Say No," a showstopper in itself, has been revamped for a gay man - Ado Andy, perhaps - who gushes uncontrollably about his attraction for handsome homosexual men." "Maria" from "The Sound of Music" gets a sweet and tender Hispanic revamp as a lovesick male reveals his love and frustrations for the absolute love of this life." "Carousel's" "When the Children Are Asleep," a sentimental take about parenthood between a happily married man and woman, has been reworked as a tender-hearted, romantic ballad for two gay men who are also parents. "Honey Bun" from "South Pacific" goes to "me-too" route to humorously expose the sexist treatment of woman globally.

Those changes and others give "A Grand Night For Singing" additional sting, bite and acidity.
Staging the two-act musical, Ruggiero digs deep into the Rogers and Hammerstein grab bag of memories, but wisely avoids the gum-drop gooey sentiment of other musical revues. Yes, this musical is an entertainment. Yes, this musical is a celebration. Yes, this musical is designed to bring back memories of vintage music and performances. But underneath, there's so much more happening here, which Ruggiero orchestrates with a clever mindfulness and reason that gives it an originality and spark all its own. 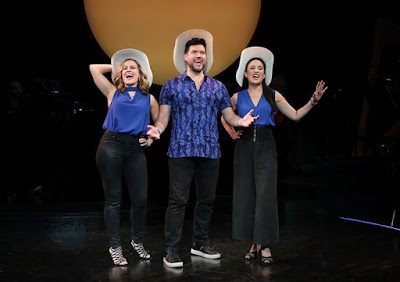 Sharing Ruggiero's decidedly different take for this invigorating interpretation of "A Grand Night For Singing," musical director Adam Souza brings new life to the music of Rodgers and Hammerstein by taking the tried-and-true repertoire to a completely new level of showmanship and musicality. For this go round, certain songs have been re-orchestrated, changed, refitted and reworked to showcase Ruggiero's crafty mindset, the vocal talents of the five-member cast and the already proven song hits that audience's recognize from popular musicals ranging from "The King and I" and "Oklahoma!" to "Cinderella" and "South Pacific." And therein, lies the magic and finesse of this sublime production.
If it feels fresh - and it is by all accounts - that's because Souza (conducting and at the piano) and his orchestral team - Susan Knapp-Thomas (harp), Edward Fast (percussion), Liz Baker Smith (reeds), Joe Messina (bass) and Celete Cumming (cello) - deftly emphasize the context, substance and vibe of the material with a natural spark and polish that allows things to resonate and connect with today's audience without ever overstating the nostalgic memories of yesteryear.
Playing the music from an entirely new perspective, Souza and company bring a formidable voice to "A Grand Night For Singing," offset by a personifying charm and contrast that is both distinct, refined and punctuated in its musical approach. The original language of the music is both honest and lilting, but given its fresh reconfiguration, it comes across with more purpose, more conviction, more prominence and more distinction. At the same time, it loses none of the sentiment, playfulness, truth and drama it had when first produced by the collaborating team of Rodgers and Hammerstein. 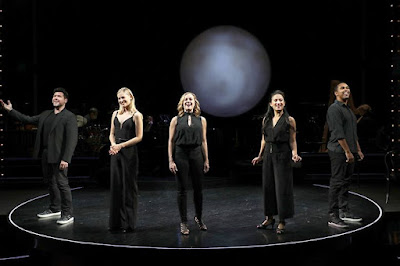 In fine form throughout, they bring a ripe, emotional quality to the mix, which they deliver with sweet, cheeky radiance and humor. Vocally, they know how to play, sell and deliver a song with kick, with drive, with pulse and with style. But at the same time, there is no copycatting here. All five connect to the familiar songs and melodies, but they put their own personal stamp on it and simply run with the flow.

Showstoppers include Nager's beautifully rendered "Love, Look Away" from "Flower Drum Song;" "Something Wonderful," from "The King and I," sung with tender affection by Martinez; Parris' dynamic delivery of "This Nearly Was Mine" from "South Pacific;" the exhilarating role reversal take on "The Surrey With the Fringe on Top" from "Oklahoma!" magically performed by Forsberg and Nager; and Phelan's sentimental delivery of "A Hundred Million Miracles" from "Flower Drum Song."

An exciting night of musical theatre, "A Grand Night For Singing" serves up a menu of esteemed songs and performances that are snappy, sexy, daring, thrilling and infectiously irresistible. It connects. It pops. It stirs. It enlightens. By showcasing this musical in a very different light, director Rob Ruggiero offers audiences more than just a musical revue. Here, you sit back and marvel at his choice of storytelling, his pairings, his interpretations, his concepts and his ability to stir the pot - so to speak - with his rousing vision and change-of-course uniqueness.

The cast, of course, shares Ruggiero's knowingness. They are smart and savvy in their own right as    both  soloists and members of the intimate, five-member ensemble. And finally in a show were there is no actual plot, musical director Adam Sousa willfully creates a songfest that is great fun, boomingly entertaining and respective of the musical team that was (and is) Richard Rodgers and Oscar Hammerstein II. 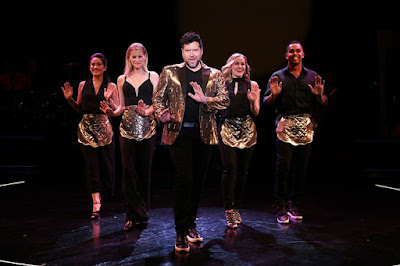