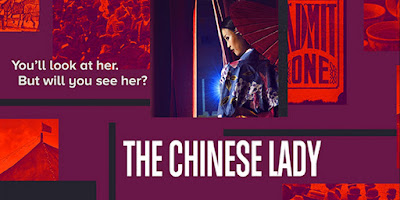 By James V. Ruocco
"I came across the story in the preface of a book about the history of Asian America, just like a sentence about her. It sparked something in me and I then went into kind of a deep dive trying to research anything I could find about her and was startled to find that there was not a lot."
(Lloyd Suh, Playwright)

In Lloyd Suh's mesmerizing, beautifully-written play "The Chinese Lady," which made its official debut back in 2018 at Barrington Stage, the story of 14-year-old Afong Moy, the first Chinese woman to set foot in America - circa 1834 - is retold by the playwright through the eyes of the title character who was taken from China's Guangzhou Province by New York City traders and put on display in a museum for Americans to stare and gawk at as she explained in length (via a translator named Atung) her humble beginnings, her life in China, her family, her culture, her traditions, her hopes and dreams, her desires, her sideshow major-city tour and travels, her PT Barnum association, the importance of drinking Chinese tea, the culinary differences between Chinese and American food and finally, the painful, barbaric process of foot binding, an ancient Chinese custom where feet were broken and altered to modify their shape.

The production, directed by Ralph B. Pena, brilliantly portrayed the little-known story of Afong Moy with a raw power and urgency that kept audiences completely riveted for its 90-minute intermission-less journey. More importantly, the casting of Shannon Tyo as Afong Moy not only gave Suh's play its strong, emotional center, but allowed the actress to create a dynamic character portrait laced with unforced ease, command, gentility, perception and absolute wonderment. 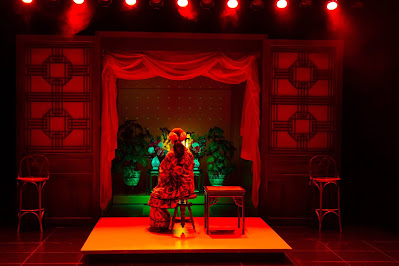 At Long Wharf Theatre, Tyo takes center stage (Pena also returns as director) to repeat her thrilling portrayal of Afong Moy in a brand new production of "The Chinese Lady," which originally was set to premiere at the theater's intimate, immersive theatrical space back in March, 2020. But due to the widespread COVID-19 pandemic, the play was temporarily postponed for the safety and well being of the performers, the theater, the production staff, the community and the Long Wharf Theatre audience.

The good news is - it was well worth the wait.

"The Chinese Lady" is an ambitious, compassionate drama shaped and nurtured by playwright Lloyd Suh, who, for theatrical purposes, re-imagines the sketchy fragments of Afong Moy's life and journey with feeling, irony, humor, perspective and arrangement. Whether or not Moy was actually the first Chinese person to come to America is debatable, but that isn't necessarily the point of the playwright's study. Here, in a production that far surpasses the greatness of the Barrington Stage endeavor, Suh presents a crafty, polished work that transports his audience back in time to the title character's world. As the story evolves, he adapts a brush-and-ink approach to the piece through words, situations, moments and impressions, all of which seamlessly connect the dialogue, the characters and his use of multiple story arcs from 1834 to present-day America, 2021. As storyteller, "The Chinese Lady" also benefits from content that is fresh, creative, challenging, aesthetic and thought-provoking.

"It's very much my hope that the play asks a contemporary audience watching it to interrogate their own assumptions about what their feelings are when they enter and what they are at the end of the play when they've spent some time with Afong Moy."
(Lloyd Suh, Playwright) 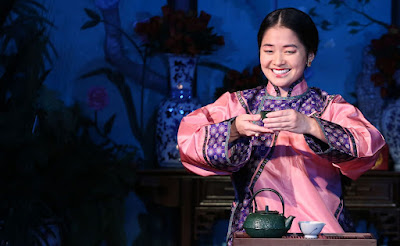 Re-staging "The Chinese Lady" at Long Wharf and backed by an exceptionally talented design team - Jiyoun Chang (lighting), Junghyun Georgia Lee (sets), Linda Cho (costumes), Fabian Obispo (sound/background music composer), director Ralph B. Pena creates a relevant work that is instructive, imaginative, academic and descriptive. Framing the story voyeuristically, he prompts an actor-audience connection that deepens the complexity and idealism of the actual story, its progression through time, its history, its facts and fictions, its sexism and its oppression. Here, as in Pittsfield, Mass., where "The Chinese Lady" was first performed, Pena delivers an intriguing, finished work that unfolds with expressive eyes, thoughts and ideas that are consistent, detailed and wisely constructed. He also maneuvers his two-member cast effortlessly about Lee's atmospheric, inviting set design, thus, establishing a time, place and sense of drama that demands attention from the moment the story begins through its Tardis-like forward jump into present-day society. 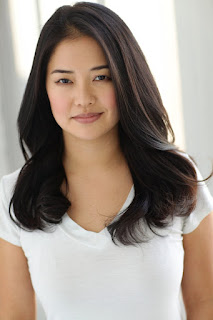 In Shannon Tyo, Pena has found a dedicated, proud and personable actress to assume the identity of the Chinese Afong Moy who first came to America in 1834. It's a performance - the performance of the year - fraught with real emotion, thrust, commitment, soul, drive and ingenuity. It's a dream role for any actress to play, but here, as in the 2018 Barrington Stage production, Tyo doesn't just portray a character, she becomes the character, which, in turn, gives the play a freshness and truthfulness that beguiles and enchants from the moment she appears in stage. It's a role she has performed before, but Tyo's interpretation is so captivating and unique, it's as though she's performing the part for the very first time. And it is exactly that kind of connection that makes "The Chinese Lady" definitive, compelling, soft and delicate.
Jon Norman Schneider, cast in the role of Atung, Afong Moy's friend, companion and translator, offers a fascinating, vibrant, driven character turn that contrasts nicely with Tyo's portrayal of Afong Moy. He smiles. He complains. He beckons. He translates. He gets irritated. He even dreams about being her lover.
When called upon, he also delivers Chinese tea, food and chopsticks to Moy in sideshow fashion, which we learn early on is part of her act before the American public. His big moment comes when he is asked to portray Moy's important meeting with President Andrew Jackson. Assuming the role of the President and communicating Jackson's words back to Moy, the actor humorously jumps back and fourth between his own character and that of the President using a vaudevillian mindset that is savvy, funny and impeccably timed. It's so playful and engaging, you wish there was a button to hit "replay." 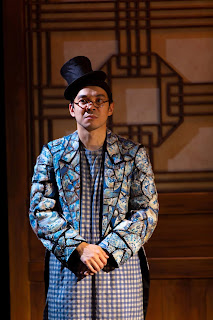 A thrilling start to Long Wharf's 2021-2022 season, "The Chinese Lady" is an exquisite undertaking for this prestigious New Haven-based venue, ideally positioned by great performances, skillful direction and playwright Lloyd Suh's beautifully imagined memoir of a young, unknown Chinese woman whose personal life and journey through time is not easily forgotten. It is one of the best plays of the year and one where emotions and thoughts linger...long after the play has ended.

Posted by JimRuocco at 9:03 AM