From the Desk of Jim R, Take 2, Column 288, A Review: "Miss Bennet: Christmas at Pemberly" (Playhouse on Park) 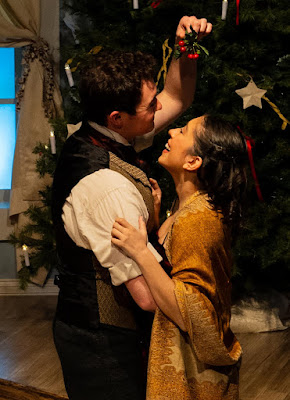 This ensemble of eight, well-cast men and women - each alighted by the thrilling period piece before them - lend themselves nicely and agreeably to "Miss Bennet: Christmas at Pemberly," a delightfully wicked comedy of manners set in England, circa 1815.


"Miss Bennet: Christmas at Pemberly" is yet another Playhouse on Park offering that unfolds with the grace, wisdom and polish that is always on display at this venue, matched by a welcoming mindset and professionalism that makes for a great night of theatre (or matinee, if you prefer) that never once fails to disappoint or entertain. This collaboration only furthers that notion. 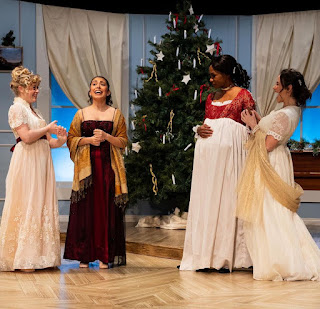 Written by Lauren Gunderson and Margot Melcon, "Miss Bennet: Christmas at Pemberly" takes its cue from Jane Austen's "Pride and Prejudice," a romantic novel (first published in 1813) about five sisters from an English family confronted by issues of morality, courting, marriage, position, social status, financial gradations and preconceived notions of customs, traditions and judgements. Here, the story continues with both writers offering their perspective and insights on what might have happened (or could have happened) to the Bennet sisters following the conclusion of "Pride and Prejudice."
Seemingly faithful to the spirit, irony and literary style of Jane Austen, Gunderson and Melcon craft a continuation of sorts that addresses the concept of womanhood and individuality with appropriate balance, imagination and practicality. This being a play, there are assorted story arcs, each designed to move the action forward while the Bennet sisters grapple with problems of freedom of expression, self-distraction, romantic flirtation, extreme pretentiousness, virtue, vanity and financial security. Lots of attention is also paid to a hilarious sub-plot involving love letters that get accidentally mixed up and fall into the wrong hands and the decision to copy a German tradition of bringing a fully grown fir tree into the house at Christmastime and decorating it with assorted ribbons, candles, flowers and ornaments. 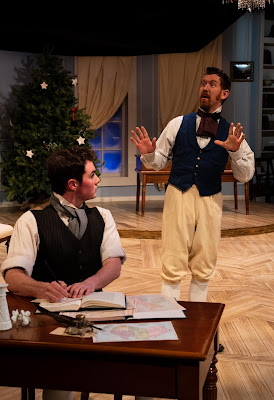 Staging "Miss Bennet: Christmas at Pemberly," director Sasha Bratt brings both strength and significance to this continuation of the "Pride and Prejudice" story, using the same sort of theatrical savvy and weight he brought to "The Revisionist" a few seasons back at Playhouse on Park. As the story evolves, cheeky charm is plentiful as is his strong sense of determination, comic assurance and welcoming wit. Completely at ease with the play's 19th century setting, he never once loses sight of the twisty romantic spin of the actual story, its characters, its shifts of mood, its palpable goings-on and its Austen-like musings.

Obviously weaned on the ethics, mechanics and stylization of BBC period dramas and comedies, all of which require a distinct attitude and conceit, Bratt gets it right every time - scene by scene, act by act, entrance and exit, etc. Here, everyone acts and behaves as if they are firmly rooted in the century from whence, they came. Bratt wouldn't have it any other way. In turn, the characters stand, sit, move, enter and exit with a decidedly English mindset that reflects their obvious upbringing and social position. You can see it in their eyes. You can see it in their stance. You can see it when they lie backwards on a chaise, hold a teacup, open and close a book, write a letter or simply stand completely still listening and observing until they feel the time has come to comment on the action. Well done. Mr. Bratt.

In terms of casting, everyone is exactly right for the roles they are asked to portray. Under Bratt's tutelage, they each have their moment in the spotlight. As actors, they completely understand how to address and perform an English comedy of manners. They know how to deliver a line of dialogue without missing a comic beat. They work wonderfully together. They are fully cognizant of the "Pride and Prejudice" back story. They know how to get a laugh by playing it straight and never once revealing the punchline. They also know how to succumb to the play's obvious romanticism without going overboard to make a point. A continuation of Jane Austen's celebrated, character-driven novel "Pride and Prejudice," "Miss Bennet: Christmas at Pemberly" is a refreshing, light-hearted portrait of early 19th century life in England portrayed with verve, style, wit and solicited enchantment. Director Sasha Bratt creates a lively atmosphere of fun, frolic and conversation, laced with well-rounded performances, pleasurable dialogue, vigorous pacing and a very happy ending.  At a time when there are far too many productions of "A Christmas Carol," "It's a Wonderful Life," and "Frosty the Snowman" or questionable fare like "What the Dickens?" "Wreck the Halls," "Earlene's A Christmas Carol - Scrooged Again!" and "Every Story Christmas Told," this production puts the fun back into holiday theatergoing by offering something completely new and enlightening without going the Charles Dickens or Frank Capra route. And that alone, is reason to rejoice.