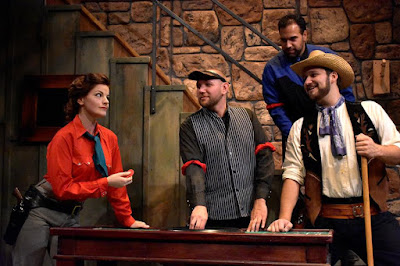 There's nothing wrong with a little bit of camp, every now and then.

That is the world of this giddy send-up of the 1954 movie western that featured fake frontier sets, swinging saloon doors, one-note dialogue, mindless direction, bad acting, repressed sexuality, garish close ups and finally, that "Mommie Dearest" witch by the name of Joan Crawford acting terribly butch instead of terribly feminine around hunky poster boy Sterling Hayden, cast in the role of a reformed gunslinger who once seduced and bedded JC's character. 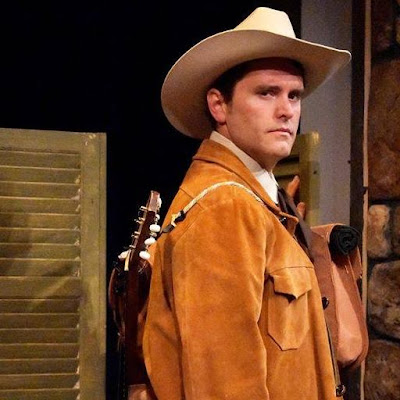 Taking its cue from the Nicholas Ray Technicolor film, "Johnny Guitar" retells the same story of lost love, shoot outs, bank robberies, lynched ropes, horse-opera tensions, seething rivalries and oh, yes, the arrival of the railroad right smack through the swinging doors of a newly opened saloon-casino. Only this time, the laughs are intentional.

Staging "Johnny Guitar" is Majestic Theater favorite Danny Eaton, a perfect candidate for this sort of western tomfoolery. Upfront, Eaton's love for theater and its overall presentation values, permeates this slap-happy musical production. He has as much fun putting it together as we do watching it. Working from Nicholas van Hoogstraten's outrageous script, he never once takes things for granted or oversteps his boundaries.

Given the obvious concept and zany plot machinations of the story, Eaton gets the point across  immediately. As "Johnny Guitar" unfolds, he maps things out precisely always knowing what buttons to push, when to take a breath or when to lay it on thick and easy to get laughs, sneers and jeers in all the right places. There are pregnant pauses, crazy muggings and positioning, silly line deliveries, melodramatic brawls and gunfights and purposely outrageous sound cues, light cues and music cues.
One of the best involves a crazy bit of well-orchestrated stage business involving the entire cast (or, whoever is on stage at the moment) when the name 'Johnny Guitar' is spoken. It's a running gag that is played over and over throughout the two-act musical and one that never once gets tired and old. It's downright hysterical.

The musical score for "Johnny Guitar" has been written by actor/singer Joel Higgins (lyrics) and Martin Silvestri (music). There are fifteen songs in all: "Johnny Guitar," "Let it Spin," "A Smoke and a Good Cup O' Coffee/Rhapsody in Boots," "Branded a Tramp," "Old Santa Fe," "They Were On Fire," "What's In It For Me?" "Who Do They Think They Are?" "Welcome Home," "Johnny Guitar reprise)," "Tell Me a Lie," "The Gunfighter," "We've Had Our Moments," "Bad Blood" and "Finale." 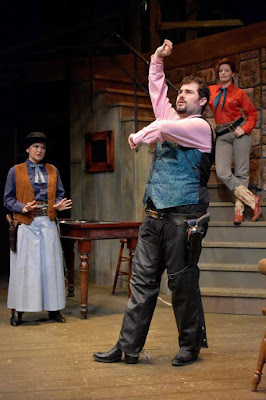 The songs themselves are serviceable to the plot without ever once interrupting the story or bringing the action to an abrupt halt just for the sake of all things musical. Up front, the score itself isn't exactly going to send you though the exit doors of the Majestic Theater singing and humming some of the lyrics. Then again, it's not supposed to evoke those musical feelings. This isn't "The King and I" or "Guys and Dolls." Here, what you see and what you get are 15 musical numbers that are fun, folksy, cheery and hokey. Each and every one of them are completely in sync with the characters who sing them and nothing more.

For "Johnny Guitar," the Majestic Theater has chosen Mitch Chakour (piano/guitar) as musical director. He is joined by Don Rovero (bass), Aaron Porchelli (guitar), Ann-Marie Messbauer (violin) and Tim Hosmer (drums). Chakour has great fun with the musical's camp and amp, its overplayed dramatics, its western-tinged ballads and its playful ensemble numbers. Everyone on stage is in perfect pitch and never once breaks character as the musical swells, edges over the top or breaks into tumbleweed hysteria. Chakour and company have a tight reign on everything and treat the Higgins/Silvestri material with the craziness and flavorful musicality it richly deserves. 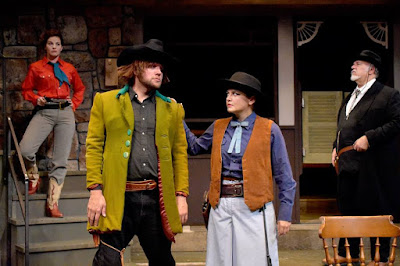 "Johnny Guitar" stars Myka Plunkett as Vienna, Billy Clark Taylor as Johnny, Bethany Fitzgerald as Emma, Michael Graham Morales as the Dancin' Kid, Michael Garcia as Sam, Steve Sands as Eddie, Joseph Duda as Turkey, Walter Mantani as McIvers and Michael King as Bart. Well chosen by Eaton for their respective roles, all nine cast members are so very right for the parts they have been asked to portray. They act, sing, emote and camp it up at the top of their form. Nothing looks rehearsed. Nothing looks out of place. Nothing falls flat. And each and every one of them, understands over-the-top parody like polished pros, thus, giving the show's dialogue and situations the intended humor and cheekiness indicated in Nicholas van Hoogstraten's gooey script.

"Johnny Guitar" is rock-solid camp and parody played out to the fullest exaggeration by a first-rate cast, director, musical director and a very creative production team that any working theater would be glad to have in their back pocket. It is fun. It is crazy. It is wild. And it makes you want to run home, call Netflix or check Turner Classic Movies for the next showing or available copy of the unintentionally funny 1954 western drama that starred Joan Crawford, Sterling Hayden, Mercedes McCambridge and Scott Brady.

One final note:
You may want to get to the Majestic Theater early to have a light snack or light dinner at the "Majestic Café," a cozy, intimate space, offering a themed dinner item (a very delicious turkey on roll sandwich and a tangy vegetarian vegetable soup that's absolutely yummy), plus lots of snacks, desserts, drinks, wines, sodas and beers. And of yes, let's not forget that freshly popped popcorn.
The "Café" is open one-hour prior to the performance and during intermission.