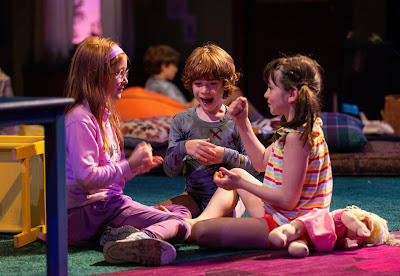 The stories.
The memories.
The traumas.
The parents.
The best friends.
The pretending.
The secrets.
The games.
The homework.
The sibling rivalry.
Whoever said, being a kid, was easy?

In "Make Believe," a new play by Bess Wohl, the angst of being a kid and everything else that comes from that once childlike state of being, is the playwright's source of inspiration and joy, including a makeshift tent of sheets and other bed linens, which oddly enough, is a dead ringer for the very same one I had when growing up.
Seriously? Yes, seriously.
Mine was in the basement. Theirs is in the playroom.
But that's where the comparisons stop. 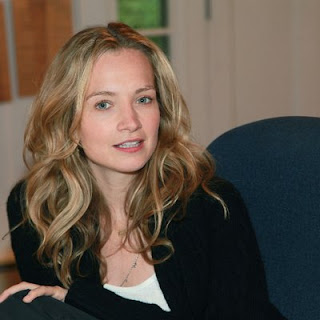 A memory play in two parts, "Make Believe" looks at childhood and how it develops and stays with us for the rest of our lives, using everyday dialogue and everyday situations most theatergoers can relate too. The kids swear, they play ball, they hide in tents, they break the heads off dolls, they pretend to bark and pee like dogs, they worry about their parents, they skip school, they drink liquor, they tell lies, they play games, they steal, they fight and they show off in front of one another just like every other kid in the neighborhood. And finally, they grow up, which, for story purposes, comprises the second half of "Make Believe."

Wohl, of course, doesn't claim to have all the answers. But there's a lot of truth and edge to what she has to say, including a few surprise plot twists which, if revealed here, would lessen the drama and tension that unfolds during the second half of "Make Believe" when the kids are all grown up. 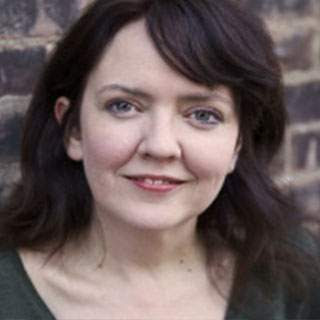 Jackson Gay, making her Hartford Stage debut as director of  "Make Believe," crafts a funny, fast-paced presentation that invites laughs, tears, sentiment, pain and memories. Ah, yes, memories. There's no escaping them, which is one of the amusing points of this remembrance play.  As is, being in a playroom and living in the safe haven of a home as a child. Or coming back years later, as an adult,  confronting issues, traumas and memories that swim inside your brain, forcing you to remember the good stuff, the fun stuff and the bad stuff regardless of the consequences.

For the most part, Gay keeps things things in perspective throughout the play's 90-minute exploration. The first half of the play, which deals with the four kids as youngsters, contains lots of energy, laughter, silliness and childhood banter, offset by some quirky stage business of  "kids just being kids" moving about the playful, colorful set (handsomely designed by Antje Ellermann) with carefree abandon. Gay has found four incredibly talented kids to pull this feat off. They recite Wohl's dialogue in perfect pitch, address their quirky characterizations with tremendous ease and have great fun romping about the set like everyday kids. 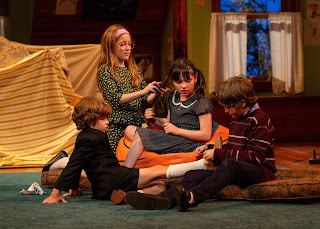 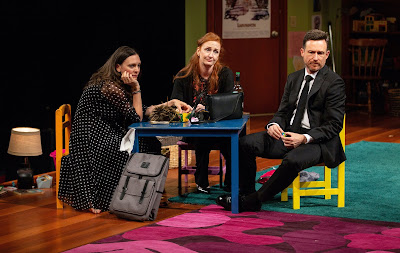 It all makes perfect sense and later, plays a key role in certain sub plots and revelations when the kids reappear as adults. But Gay can't work miracles. The kids, delightful as they are, are on stage for far too long, a fault of the script, that can easily and quickly be remedied.  Eliminating about 10-12 minutes of their story or some of the non-verbal stage blocking is highly recommended. It not only would improve things considerably, but give the adult characters more stage time instead of equal stage time with the younger cast members.

When the adult characters finally appear during the second half of "Make Believe," the curiosity of having them all (minus one, of course) come face to face (in the very same playroom of their childhood) to confront their past demons, traumas and memories, gives the piece a certain curiosity and oomph that Gay brilliantly shapes and molds right through to the play's bittersweet conclusion. Things are lively, heated, surprising, offbeat, crazy and revelatory.
Directorially speaking, everything is mapped about evenly and dramatically with no breaks in the action, its plotting or its advancement. Gay gives her actors plenty of interesting things to do, but, sadly, it's all over too quickly. Adding an additional 15 minutes to the adult scenes could easily benefit the piece and add additional depth, shading and nuance to the characters themselves. It's an easy fix and one the playwright could easily master. 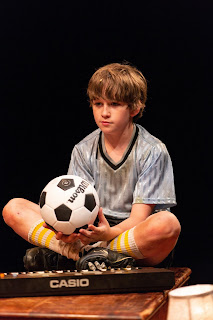 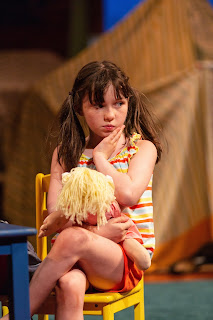 In "Make Believe," the younger characters are played by Sloane Wolfe (Kate), Alexa Skye Swinton (Addie), Roman Malenda (Chris) and RJ  Vercellone (Carl). They are the ideal quartet to inhabit these roles which they do so with childlike fervor, imagination, animation and excitement. They only miss a beat two when the material jumps off track for the moment or when the scenes play a bit longer than they should. .
.
The adult cast is represented by Megan Bryne (Kate), Molly Ward (Addie), Chris Ghaffari (Chris) and Brad Heberlee (Carl). Here, Gay has assembled a first-class team of talented performers, all of whom play their roles perfectly with creative and intuitive aplomb.  No one makes a false move. No one breaks character. All dialogue and interactions are delivered with natural ease. And when necessary, they display, much to the audience's delight, moments from their childhood past, copying the same animation, verbage and body language of the younger cast members. 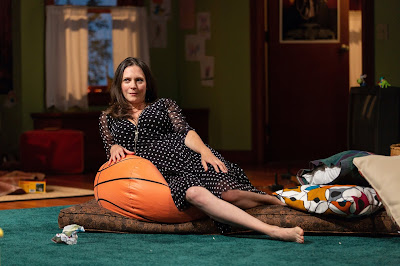 "Make Believe" is an odd, quirky and lively entertainment about childhood, survival and growing up. It jump starts Hartford Stage's thrilling, new season of plays that includes "Henry V," "A Christmas Carol," "The Engagement Party," "Detroit '67," "Jeeves & Wooster in 'Perfect Nonsense,' " and "The Flamingo Kid."
The play itself is definitely worth a peak. It also conjures up memories of one's own childhood, both good and bad, and leaves one with that nagging feeling of "What if?" or "Could I have done things differently?"
I'd sure welcome the chance to build that tent again, invite my friends over to play board games, have pizza, talk about my secret crushes on the girls who lived up the street from me and show everyone how much money I had stolen from my dad's secret stash inside the jacket pocket of his Brooks Brothers suits. If the truth be known, he always knew about my thievery but found it funny that I kept going back for more. Ah, parents! Don't you just love them? 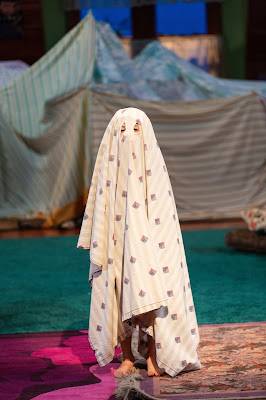 All photos by T. Charles Erickson