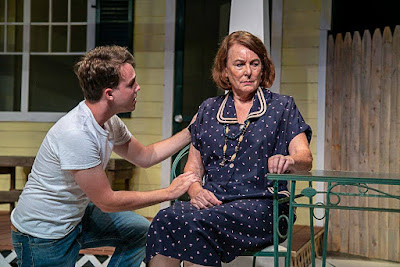 There's something enormously gratifying about sitting in a theater, watching a play and being confronted by revelatory performances that unfold with such enormous passion and austerity, they grip you like a vice, fronted by constantly shifting balance, weight, power and beauty.

At TheatreWorks/New Milford, where Arthur Miller's tragic masterpiece "All My Sons" is being revived,  Mark Feltch, Noel Desiato and Tommy Ovitt, deliver three of the finest dramatic, explosive, ovation-worthy performances of the 2018 theater season . It's a privilege and an honor to not only watch them perform, but witness first hand how they address, tackle and portray three of American theaters most dynamic 20th century characterizations.

The play, of course, is just as revelatory.

This is a breathtaking, fiercely acted revival of American Dream dystopia. It is also one of the most fascinating plays to be presented at this theater this season, comparable to that of "Proof" which played this treasured New Milford space back in February. 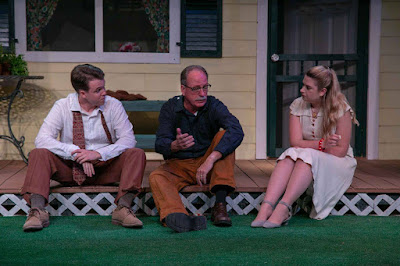 "All My Sons" is the dramatic tale of an idealistic young man who discovers that his kind-hearted, hard-working father, a man he truly adores, knowingly shipped dodgy, defective aircraft parts (cracked cylinders, to be precise), during World War II that resulted in the death of 21 Air Force pilots.

As written by Miller, the play itself deals with themes of greed, depression, compromise, ethical responsibility, corruption, hidden truths and character renaissance. The beauty, of course, lies in the writing, an intoxicating blend of truths, criticisms, hypocrisies and generational struggles that are timeless, informative, observant and undeniably individual. Here, as in "Death of a Salesman" and "After the Fall," lives clinging to destiny and to a destructive fatefulness are the playwright's forte. It's a theme any director would welcome in a heartbeat.

The complex, emotional layers of Miller's play text are convincingly carried out in thrilling, edgy detail by the English-born director whose TheatreWorks' credits include "Exit the King," "The Taming of the Shrew," "Medea," "The Laramie Project," " Gross Indecency" and "The Elephant Man." Upfront, this is a very complicated, dramatic piece that requires someone with an appreciation and understanding for Miller's story, its human problems, its angered showdowns and shattering blows. Farnol handles all of this and more with the grace, skill and knowledge gained from years of study at The Royal Academy of Art in London.

What's impressive about Farnol's work in "All My Sons" is that things are never rushed, taken for granted or overly staged for dramatic effect. Instead, things happen naturally. A beat, a pause, a close up or a time out is effectively utilized for dramatic effect, when necessary, as is the placement of an actor full front to the audience or the pairing of two, three or multiple characters when dictated by the script
.
Farnol accomplishes this feat swimmingly, always knowing who to thrust in the limelight, when to move and place someone here and there, when to have them simply stand still and observe or when to let them completely fall to pieces. Given the intimate size of her working space, she lets the material  grow and breathe, entice the audience voyeuristically, shake them up a bit and push them to the edge of their seat. It's a game plan that complements Miller's writing effortlessly.
. 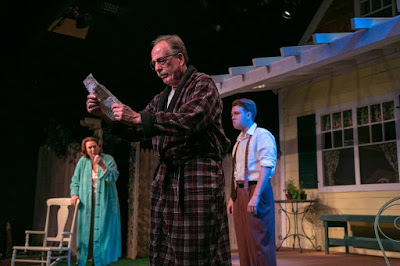 As Joe Keller, Mark Feltch gives his characterization the emotional punch and weight it so richly deserves. The role itself is absolutely perfect for this skilled actor who is appropriately guilt-ridden, haunted and defensive about his character's past, his dark secrets and his obviously divided household. Regardless, you are drawn to him, despite the deceit, the blood on his hands and a cover up that sent his partner to prison. Simply amazing.

Kate Keller, played by the brilliant Noel Desiato, is an assured, forceful, incredible talent whose love of performance and all things Miller, makes her the perfect candidate to bring this emotionally troubled character to life. Her pain and anguish over a son she refuses to admit is dead is honestly communicated through both dialogue and moments of strained or tormented silence. She also deftly projects the image of a woman trapped by her husband's guilty past and the decision to hide the truth from her only surviving son Chris. Her complete meltdown, which comes nears the end of the play, is a tour-de-force in itself, hauntingly conceived and played by the actress under Farnol's intuitive direction. 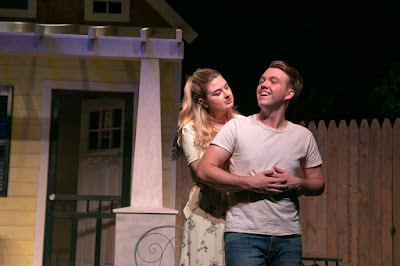 Tommy Ovitt gives a commanding, involved performance as Joe Keller's younger son Chris. It is charismatic, personable, innocent and genial and one of the most richly textured performances of the season. Clearly, acting is Ovitt's calling. He's so honest and so believable, even Arthur Miller would applaud his portrayal. He recites the playwright's dialogue with steadfast conviction. His characterization comes from the heart. His reactions, expressions, body language and dramatic interaction, development and intensity, are uncannily honest and always in sync with Miller's intentions for the character. And finally, the play's power and urgency are even more effective  (in
particular, his fury after discovering his father's corrupt cover-up), due to Ovitt's carefully-crafted crackerjack portrait.

Paige Grey, in the role of Ann Deever, the neighbor's daughter who has shunned her father since his imprisonment, plays the part with dutiful charm, passion and inquisitiveness. She is also well-matched opposite Ovitt who plays her boyfriend Chris. One of her best moments comes when she confronts and shows Chris' mother Kate a letter from her deceased son. She and Desiato give this pivotal moment in "All My Sons" the sting and tragic insight it deserves. Just brilliant!

Jonathan Ross, an actor who has spent decades performing in area theater, is one of those actors who comes into any given production, with the assurance, drive and dedication that always makes his work completely memorable. Here, he is well cast as Dr. Jim Bayliss, a frustrated, successful doctor and close friend of the Keller family, who, often finds himself in their backyard making conversation, observing or simply reacting. He does all three superbly.. 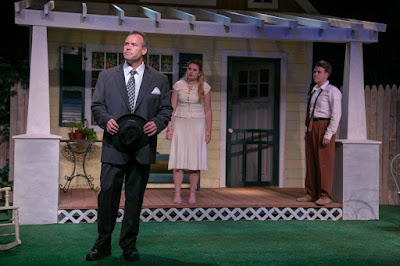 Deron Bayer also stands out as George Deever, a successful New York lawyer and WWII vet, who finds himself completely enraged by the lies and secrets of the Keller family. It's a centered, angst-ridden performance that flows with the ease, curiosity and anger intended by the playwright and performed with a demeanour  that is personable, truthful and impressive.

For scenery, Jim Hipp has designed a handsome, serviceable backyard setting that serves the material well, as does Nick Kaye's sunny, moody, every-changing lighting palate. Mary Kimball's choice  costume design is colorful, important and reflective of the period from whence it came. The clothes themselves also complement the actor's who wear her different, assorted designs. And, no one gets lost or upstaged by the scenery, which is a sign of steadfast, intuitive costume execution.

"All My Sons" is a moving, passionate, intimate drama. As written by Arthur Miller, it remains a timeless classic of American theater, fraught with real characters, real dialogue, real subplots and real emotion.  Today, as when it was first performed on Broadway back in 1947, it displays a compelling humanity and moral ambiguity, well portrayed by the playwright, Farnol and the exceptional TheatreWorks cast. 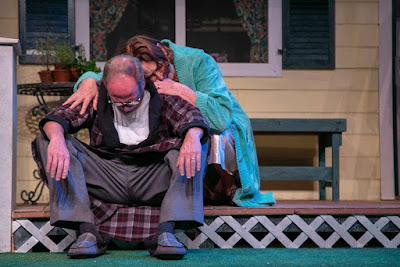