From the Desk of Jim R, Take 2, Column 143, A Review: "The Mystery of Edwin Drood" (Connecticut Repertory Theatre) 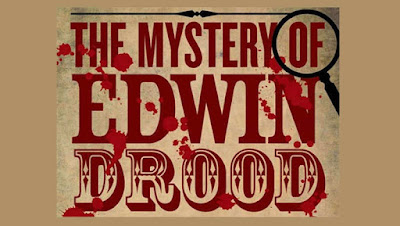 Since "The Mystery of Edwin Drood" takes its cue from Charles Dickens unfinished novel, that question, among others, remains unanswered, well, at least, for the moment.

Did the opium-dealing Princess Puffer kill the handsome and kindly Edwin Drood?
Was it the egomaniacal John Jasper?
Rosabud?
Rev. Crisparkle?
Could the culprit be Helena Landless or her brother Neville?
What about Durdles or Bazzard? 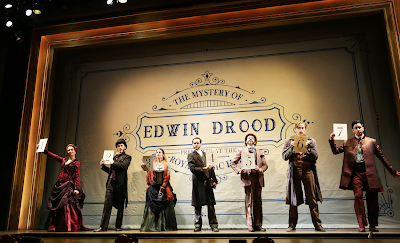 That's the crucial question of this savory, wickedly funny musical telling that gets its final revolve from the audience. They decide the "whodunit" as cast members roam the audience asking for a show of hands to finalize the musical's surprise ending, which differs from performance to performance, night after night, depending on the actual vote.

The audience also gets to decide (via applause) the real identity of Dick Datchery, a heavily disguised detective who turns up in Act II asking lots and lots of questions. But wait, there's more. Since the musical begs for a very happy ending, the sudden revelation of "Drood's" secret lovers is discussed and bandied about until the audience decides (via mad applause, of course), who the lucky twosome are. Here, the crazier the match, the better. And yes, it is widely encouraged and acknowledged by the "Drood" ensemble to let your imagination run wild. 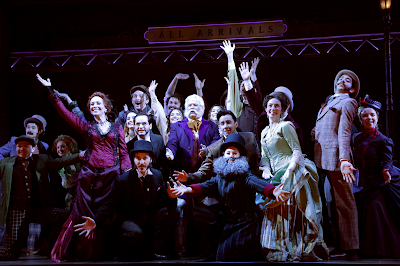 In staging "The Mystery of Edwin Drood," director Paul Mullins conjures up splendid images of 19th century London, its grand Music Hall Royale, its mischievous populace, its resident players, its shameless misfits and oh yes, a Dickensian atmosphere of intrigue, suspicion and murder. That said, Mullins also has great fun kicking the "Drood" story into high gear while messing with your senses, jump starting the whodunit resolve conceit, amping up the play's whirling story board, tossing red herrings everywhere, knocking you on your ass, slapping you in the face with lots of British music hall shtick and shamelessly asking his energetic cast to break the conventional fourth wall of live theatre for both dramatic and comic effect to address the audience directly.

With Mullins at the helm, this effervescent revival of the Tony Award winning Broadway production, catches fire immediately. It is fun. It is ferociously witty. It is bawdy. It is expressive. It is plum pudding, sprinkled with real sugar, candied fruits and brandy. 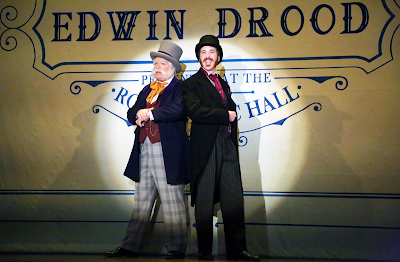 Directorially, "The Mystery of Edwin Drood" never once oversteps its bounds nor does it resort to overkill to make its point. Instead, Mullins knows his story inside out. He loves Dickens. He appreciates Dickens. He gets the concept, its conclusion and its welcomed audience participation. But before it all comes to a head, so to speak, he celebrates the musical's restless antics, its pleasurable charms, its page turning detective story and its obvious grab bag of clues, tensions, surprise twists and elaborate ultimatums with wild, gleeful abandonment.

The musical score, written and composed by Rupert Holmes comes gift wrapped with a plethora of ripe, pungent, character-driven songs that keep "The Mystery of Edwin Drood" merrily afloat for well over two hours. Songs include "There You Are," "A Man Could Go Quite Mad," "Two Kinsmen," "Moonfall," "A British Subject" "The Wages of Sin," "Never the Luck," "Setting Up the Score," "Off to the Races," "Don't Quit While You're Ahead," "The Garden Path to Hell" and "The Writing on the Wall."

The songs themselves are logical, tuneful, romantic, crazy and mysterious, punctuated by cleverly orchestrated themes, pathos, wit, whimsy and high camp. All of them fit perfectly into the musical's evolving plotline (the actual score has been updated and revised several times since its official 1985 Broadway opening to include new or reworked material) and nicely complement the show's musical hall atmosphere, its many star turns, its showstoppers, its arresting chords and rhymes, its playful mischief and its murder mystery validation.

For this production, the catchy, imaginative Holmes musical score has fallen into the more than capable hands of Alex Thompson, a music director well versed in the mechanics of this form of entertainment, its musicality, its show-within-show concept and its rollicking pastiche of musical-theater flourishes, rhythms and psychological complexities.

Backed by a first-class team of musicians, the score itself is fresh, exciting, intimate and grandly melodic. It is exactly what it ought to be: pure and simple enjoyment with showstopping musical moments from an exceptional ensemble cast, all of whom find, rich, harmonious depth and purpose in the show's lush, appealing musical moments. 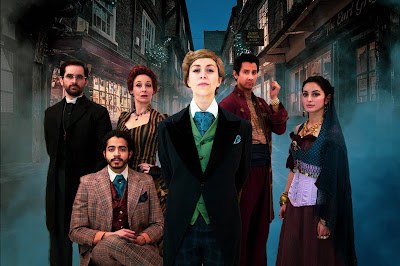 "The Mystery of Edwin Drood" stars Emily Ferranti, Kurt Zischke, Bryan Mittelstadt, Graceann Brooks, Rebekah Santiago, Mauricio Miranda, Nikolai Fernandez, Kelly Lester, Rob Barnes, Matt Bader and Sebastian Nagpal. As actors and singers, every one of these performers is extremely gifted, charming and personable. Mullins has cast them perfectly in his Dickensian puzzle, giving them apt room to play their roles convincingly in grand musical hall tradition, allowing them to tease and taunt the audience when the script asks them to break the fourth wall and finally, mount suspicions as the story builds to its eventual climax as decided by the audience. They are so engaging, there are times when you wish you could hit "rewind" and watch certain scenes or musical numbers over again and again.

A thrilling evening of song, dance, mystery and mayhem, "The Mystery of Edwin Drood" is a compelling piece of music theatre. It is fun. It is cheerful. It is original. It is daring. Its show-within-a-show conceit is well-intentioned  and happily delivered. Its cheeky British humor is winningly rehearsed and cheerful. The actual gimmick of letting the audience decide the musical's ending and other story points, enhances the show's flavorsome appeal. And lastly, no two performances are alike, which heightens the musical's given allure, sparkle and contagious merriment. 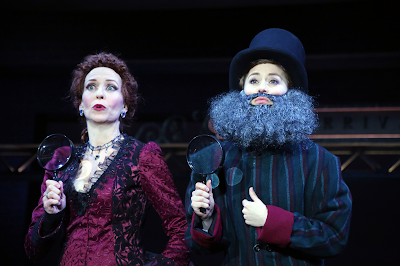 "The Mystery of Edwin Drood" is being staged at Connecticut Repertory Theatre (Jorgensen Center for the Performing Arts, 2132 Hillside Rd., University of Connecticut, Storrs, CT), now through March 10.
For tickets or more information, call (860) 486-4226.
website: /crt.uconn.edu.
Posted by JimRuocco at 8:44 AM