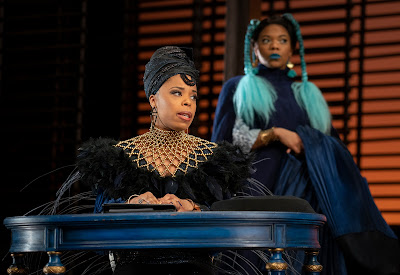 Mischievous and merry.
Vibrant and polished.
Good-humored and funky.
Party-colored and festive.
Carnivalesque and tropical.
Refreshing and sexy.
Lush and keen.

Those sweat realities are a thing of beauty in Yale Rep's sunny, colorfully-dressed and re-imagined interpretation of William Shakespeare's "Twelfth Night," a sassy, insanely flavorful work that's especially fun to watch (and I mean, FUN) thanks to the company's effervescent cast of 16 energetic performers who happily jaunt through Shakespeare's 17th century verse with such free-range buzz, spunk and knockabout abandonment it's impossible not to be gobsmacked by the sheer exhilaration of it all.

It is also fitting to note that this is not Yale Rep's first foray into the free-for-all world of "Twelfth Night." Back in 1995, director Mark Rucker offered theatergoers a gleeful, decadent reworking of the Bard's popular comedy, using a 1960's setting, complete with an over sized swimming pool of fresh water, an Italian cabana nightclub and an oddly-mirrored penthouse, offset by playful dashes of Federico Fellini, Bob Fosse, Kurt Weill, the Marx Brothers, bongo drums, sun screen, oversized beach towels and LSD simulations. The cast, headed by Suzanne Cryer, Nathan Hinton, Sanaa Lathan, James Hallett, John Bland and Trevor Anthony, were in top form, reveling in Rucker's lusty, over-the-top flamboyance, whilst remaining faithful to the lightweight Shakespearean text. For most, a second or third visit was mandatory. 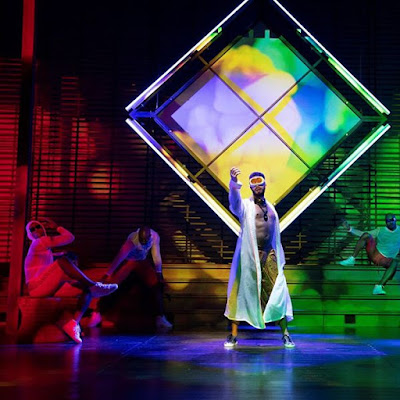 The current "Twelfth Night" evokes that same FUN feeling and revisit aura as it uses a futuristic mindset of tropical Caribbean, Afro-funk, Afro-American stereotypes, pumped-up, navigated technology, R&B, hip-hop frivolity, gay-inducing merriment and Hollywood/"Queer Eye" dazzle, glitz and fashion to make its point. There's also a healthy amount of "Black Panther," " The Lion Ling" and "Star Wars" fantasy thrown into the proceedings for added measure, all of which succeeds, no pun intended, quite swimmingly.

Here, as in other Shakespearean comedies, "Twelfth Night" takes its cue from mistaken identities, role reversals, cross dressing, shattered hearts, mass confusion, practical jokes, misconstrued, hand-written letters of affection that fall into the wrong hands of others and  romantic triangles that end happily for all. At the center of this story are Viola and Sebastian, two twins who are separated by a shipwreck. As the story unfolds, Viola, disguised as a man named Cesario, falls in love with the narcissistic Duke Orsino, who, in turn, is madly in love with the regal Countess Olivia. Olivia, however, upon meeting Viola, finds herself smitten with her thinking that she is a man. More merriment ensues when Viola's long lost twin Sebastian miraculously shows up (remember, he was presumed dead by his sister) and quickly welcomes Olivia's amorous advances, not knowing exactly why she is so taken with him. 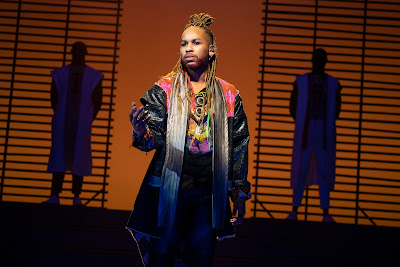 At Yale Rep, "Twelfth Night"is being directed by Carl Cofield, a master wizard of sorts whose directorial credits include "The Mountaintop," "A Raisin in the Sun," "Antigone," "The Tempest," "Macbeth," "One Night in Miami" and "Dutchman." The perfect fit for all things Shakespeare, Cofield's re-thought view of the Bard's oft-revived comedy is instinctive, playful, cunning, delicious and passionate.

Holding his audience in the palm of his hand, from start to finish, he crafts an eye-popping production that achieves a perfect poise between high camp, an acid trip and a futuristic gabble, centralized by an energetic whirlwind of grandeur, abundance and surprise that's both majestic, intimate and befitting of Shakespeare's writing, his characters and oft-played scenario. Even if you're familiar with "Twelfth Night" ("Is there anyone out there who isn't?"), what's fun about Cofield's take on Shakespeare is that you're never quite sure what he's going to do next, what he has up his sleeve, who's going to do what to whom, what's going to rise up out of the stage floor, who's going to sing, who's going to dance or who's going to unashamedly overact for the sake of huge belly laughs by poking fun at black stereotypes in music, in film, in plays or on television.  And therein, lies the key to "Twelfth Night's" unparalleled enjoyment. 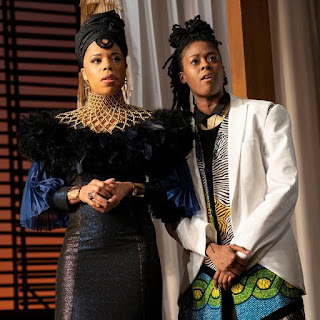 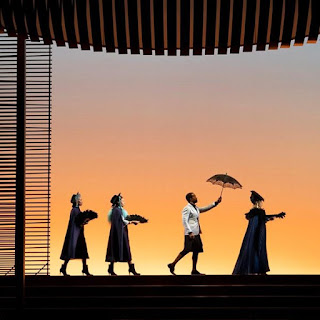 Well versed in the machinations of Shakespeare's world and its populace, Cofield also enjoys taking chances, a conceit which works to full advantage in this production. From the outset, he gets the Bard. He likes the Bard. He understands the Bard. He appreciates the Bard. But at the same time, he opts for a much more loose and crazy interpretation, adding imagined bits of inspiration from the black experience, the black culture, the black lingo, the black history, the black community and the black perspective of the future. Here, the recurring theme of what is life in Illyria, as populated by persons of color, is what keeps this "Twelfth Night" afloat. It is beautiful. It is rich. It is tantalizing. It is seductive. It is insane. It is homoerotic. It is significant. And finally, it is awash with music (gloriously created and configured by composer Frederick Kennedy) and poetry that is both hypnotic, abstract and expressive.

"Twelfth Night" stars Tiffany Denise Hobbs as Olivia, Moses Ingram as Viola, Abubakr Ali as Sir Andrew Aguecheek, William DeMeritt as Orsinio, Ilia Isorelys Paulino as Maria, Jakeem Dante Powell as Sebastian, Allen Gilmore as Malvolio, Manu Kumasi as Antonio, Chivas Michael as Sir Toby, Erron Crawford as Feste and Raffeal A. Sears as Fabian. Every one of these performers is well versed in the language of the Bard which they recite with assurance, efficiency and intelligence, thus, giving it the unifying grace, lift, eloquence, spirit and intimacy it requires to make it soar, pop and resonate. They have fun. We have fun. They are excited. We are excited. They know Shakespeare inside out, forward, front and center. And yes, we willingly go along for the ride. 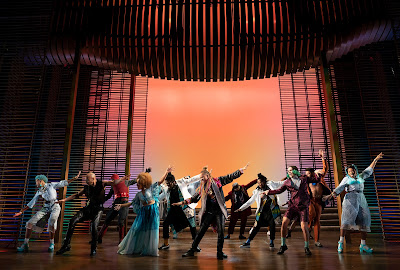 As actors, they each bring a wonderful, uniquely eclectic collection of expressions, emotions, personalities and acting styles to their individual roles. They take hold of them, shape them to their liking and make them their own (no two actors are alike), which in a production as intimate and refreshing as this one, makes all the difference in the world. Elsewhere, they nicely succumb to the atmospheric feel of the production, its futuristic conceit, its idyllic setting, its comedy, its drama, its music, its novelty, its dances and its music.

Technically, "Twelfth Night" overflows with pungent creativity. Set designer Riw Rakkulchon's idyllic milieu immediately conjures up fond memories of Broadway's "The Lion King," which, of course, is meant entirely as a compliment. It is beautiful. It is vast. It is breathtaking. It is original. It also complements the sweet-natured antiquity and raw beauty that is Illyria and its bold, futuristic mix of African intensity, royal intrigue and mystery. Samuel Kwan Chi Chan's savvy lighting design also taps smartly into the proceedings as does Brittany Bland's wildly creative projection designs. 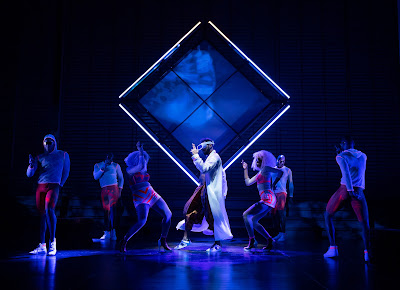 The applause, gasps and cheers from both straight and gay members of the audience in response to Mika H. Eubanks' stunning costume designs is entirely justified. This third year MFA candidate from the Yale School of Drama is a major talent whose spectacular design work for "Twelfth Night" is dazzling, unique and completely original. Every one of her creations is a complete labor of love (the workmanship alone will knock your socks off), that compliments the actors who wear them, the "Twelfth Night" characters they portray and their evolution in the story. These designs are so flawlessly executed, don't be surprised if someday (that is, someday very soon), you find Eubanks creating and designing costumes for both Broadway and West End shows. That's how gifted she is.

Joyous, dazzling and colorful, "Twelfth Night" celebrates William Shakespeare's gender-bending tale of unrequited love and mistaken identities with extraordinary wit, enchantment and flair. Executed with lively, freewheeling blissfulness and enthusiasm, it is an amazing piece of theater that is stylishly staged and marvelously acted. It also employs that daring, acutely truthful abstract spirit that Yale Rep is famous for. But in this go-round, as dictated by director Carl Cofield , it explodes in glorious, fruity 3-D Technicolor that is as freshly minted as the imagined land of Illyria itself with a welcoming pulse and invite that is simply irresistible.


"Foolery sir, does walk about the orb like the sun, it shines everywhere."
("Feste, "Twelfth Night" by William Shakespeare) 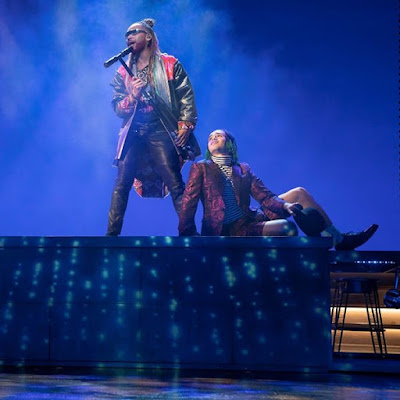