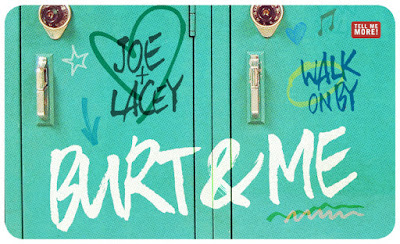 "Do You Know the Way to San Jose?"
"Walk on By"
"I Say a Little Prayer for You"
"The Look of Love"
"A House is Not a Home"
"What the World Needs Now"
"Promises, Promises"
"Raindrops Keep Falling on My Head"
"I'll Never Fall in Love Again."
"She Likes Basketball."

Is there anyone out there who hasn't been seduced by the breezy, sweet-sounding music of Burt Bacharach?

From tales of love to songs of hope and heartbreak, Bacharach's memorable parade of classic songs (many of them co-written with lyricist Hal David), not only reveal his genius for melody, but his flair for complex, smooth arrangements dispensed with plenty of heart, soul, passion and gentleness.

Larry McKenna's "Burt & Me," a coming of age/boy-meets-girl story, played out against the backdrop of Bacharach's playful song repertoire, fondly remembers the composer and his music at the peak of his career. It is fun. It is cute. It is corny. It is entertaining. It is also, on occasion, flat-footed, gooey, dull and boring.

Not to worry, though.
If you're on the market for something that's pure candy floss and infused with just the right amount of good cheer and sentiment, "Burt & Me" more than delivers. It's not "Jersey Boys," "All Shook Up," "Mamma Mia" or "Beautiful: The Carole King Musical," by no means. Then again, that was never the intention. It exists mainly to bring Burt Bacharach's music to the stage...and nothing more. 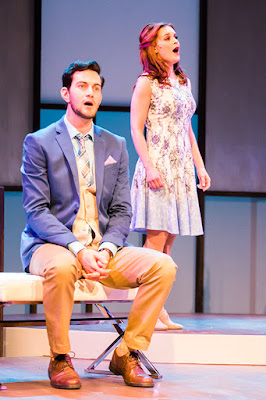 "Burt & Me" is being directed by Brian Feehan who staged last season's exhilarating production of "The Fantasticks" at Ivoryton. For this go-round, Feehan is faced with material that isn't as savvy or as creative, but he makes the most of the show's flimsy, feckless story board by injecting plenty of feel-good fun and whimsy into the proceedings. He also keeps the two-act musical afloat with breakneck pacing and pulse that is good medicine for the show's outdated moments, its one-note cliches and it antiquated, stereotypical character bits.

This being a book musical that utilizes the talents of seven different people, Feehan's staging of the non-musical moments finds cast members casually moving set pieces into place from scene to scene, pouring drinks, changing costumes, making champagne toasts, sitting or standing attentively listening to others speak or readying themselves for solos, duets and ensemble numbers. Timing is everything here and Feehan knows exactly what he wants, where and when to shift the action into high gear, when to take a breath and let the material breathe and when to enlighten or enliven the mood when a line of dialogue signals the next musical cue. He succeeds swimmingly.

At Ivoryton Playhouse, Michael Morris has served as musical director for eleven different productions including "Rent," "Dreamgirls," "West Side Story" and last season's "A Night With Janis Joplin" and "A Chorus Line." Here, he is faced with the challenge of recreating the magic and charm of 22 Bacharach songs in a jukebox musical format. The songs - there's a lot of them - flesh out the story as best they can and never once seem out of place, contrived or tossed into the mix because they happen to be a favorite of the show's creator. The audience, in turn, happily goes along for the ride, often humming, singly softly or tapping their feet to the beat of the music. 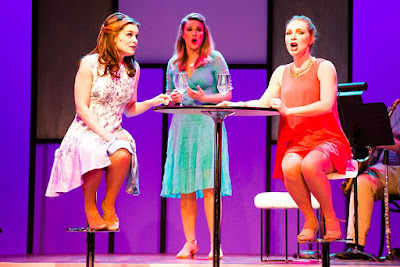 That said, "Burt & Me" isn't actually a concert, which means that Morris (on piano) and his talented orchestral team (Mark Gehret (bass), Michael Raposo (woodwinds) and Gus Gustamachio (drums/percussion) serve up songs like "Close to You," "What the World Needs Now," "Always Something There to Remind Me," among others, in typical Broadway musical style. It's a conceit that works, but often doesn't give certain songs the drive, pulse and command they once had in a concert performance format.

Vocally, the cast, under Morris' tutelage, put their best foot forward as they warmly embrace the feel-good musicality of Bacharach's harmonic songbook. Happy memories ensue, as does frothy, pop-tinged interpretations of "Walk on By," "The Look of Love" and the effervescent "Turkey Lurkey Time" and "Knowing When to Leave" from the 1968 Broadway musical "Promises, Promises." As "Burt & Me" evolves, Morris and company also embrace the chords of memory that come from these well-known songs and others using concentrated determination, flowing pulses and effective pacing. 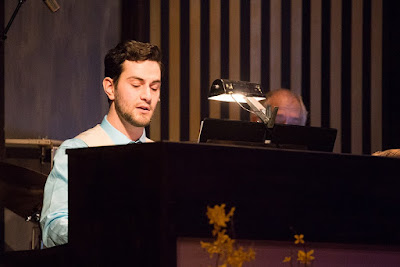 "Burt & Me" stars Andy Christopher as Joe, Lauren Gire as Lacey, Neal Mayer as Alex, Josh Powell as Jerry, Adrianne Hick as Sally, Nathan Richardson as Nick and Katie Luke as Rebecca. As a whole, the cast is energized and well versed in the history of all things Bacharach. As Joe, the geeky teenager who discovers Bacharach's music via his piano teacher, Christopher has the right mindset for his character, his passion for music, his love of Lacey and his familial bond with his dad. Vocally, he sings the songs as written for a non-concert format, but oddly, lacks the confidence and vocal oomph needed to sell a song the way it was envisioned by Bacharach or find the intended meaning behind each lyric. Elsewhere, Christopher gets laughs in all the right places (his comic timing and dry line delivery is impeccable) whenever he tells the audience about his huge boyhood crush on Angie Dickinson, the very sexy film and television star who, at one time, was Mrs. Burt Bacharach. 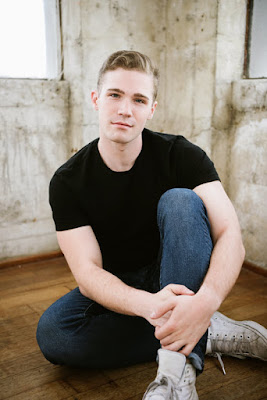 Nathan Richardson has the appropriate charisma, spark, looks, personality and vocal chops necessary to play the the part of Joe, but instead, he has been cast as Nick, a character who remains off to the sidelines, which, makes absolutely no sense whatsoever. He can sing. He can act. His expressions, reactions and interactions with the other cast members are completely natural. They are also in sync with the story's nostalgic waves and memories. So why isn't he given two or three solos of his own?  "Only Love Can Break a Heart," "Come and Get Me" and "Lost Horizon" quickly come to mind. A quick call to Larry McKenna is suggested. Today, that is.

Lauren Gire, as Lacey, the young girl who captures Joe's heart, is lovely, charming and overflowing with well-intentioned spirit. Vocally, she nails every song she sings as does Adrianne Hick who plays Lacey's flirty, boy-crazy pal Sally. Neal Mayer, who portrays Joe's father Alex, among other roles including a priest and vocal coach, offers three winning, well-acted character turns. As Jerry, Josh Powell hams it up most agreeably as Joe's sidekick and best mate. Kate Luke, as Rebecca, doesn't get to do much, but when she does, she makes her presence known. Like Richardson, she too is in need of a strong solo or two to showcase her obvious strong vocal talents. 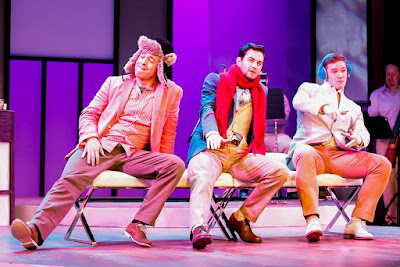 For anyone looking for a fun night out of musical theatre, "Burt & Me" is a very sweet, intimate
show with a very big heart. It entertains. It enlightens. It sings. It channels wonderfully wistful bits of nostalgia. Its everyday story of young love brings a smile to your face. Its celebration of all things Bacharach, however,  may have been better served by a more fluent, driven script, the mandatory addition of missing songs like "Alfie," "Anyone Who Had a Heart" and "What's New Pussycat?" and a reworked story board/song rotation that gives each and every cast member on stage his or her big moment to shine, not once, but twice using that expertly timed vocal showmanship set forth a long time ago by Cilla Black, Dionne Warwick, B. J. Thomas, Dusty Springfield, Tom Jones, Jackie De Shannon and so many others.


Photos of "Burt & Me" by Jonathan Steele 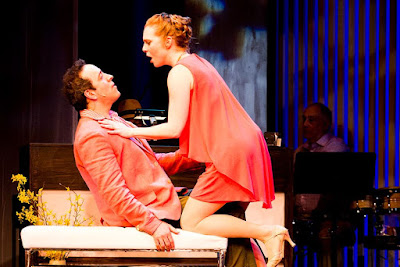 Posted by JimRuocco at 3:41 AM